Actual #1 Cause of Global Warming Revealed to Be PBEM

What is the #1 cause of global warming?

If you guessed #6, congratulations, you are correct — as The Deplorable Climate Science Blog confirms.

The global warming priesthood at Climate Central and elsewhere bark that temperatures have risen 1.5°F since the 19th century, which isn’t much, when you consider that climate fluctuation is natural. But for the past century the climate has been even more stable than they claim.

National Oceanic and Atmospheric Administration data supports the 1.5°F claim, but this data has been “adjusted.” The graph below shows the effect of the adjustment by subtracting the actual temperature measured by the United States Historical Climatology Network from the adjusted temperature: 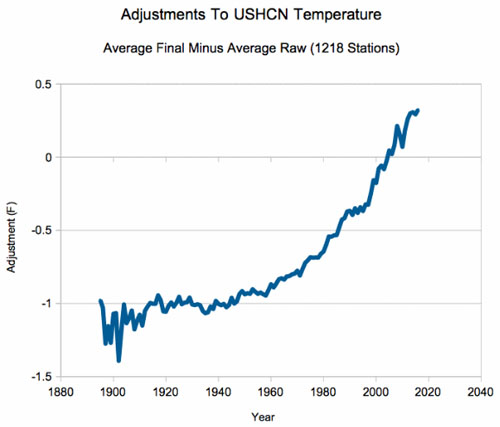 Maybe it’s not such a coincidence after all:

NOAA is adjusting the data to match global warming theory. This is known as PBEM (Policy Based Evidence Making.)

Often NOAA adjusts temperature data to fit leftist theory the easy way — by inventing it from scratch. For example,

In 2016, more than 42% of their monthly station data was missing, so they simply made it up. This is easy to identify because they mark fabricated temperatures with an “E” in their database.

Global warming would be nice, because in combination with higher CO2 emissions it would lead to more plant growth and consequently more food. However,

It is increasingly looking like the first full week of 2017 will be greeted with a cold air outbreak over the Lower 48 states that will be widespread and persistent.

Early next week the cold air will enter the U.S. through Montana and the Dakotas, where temperatures will likely plunge into the minus 30 deg F (or colder) range.

By the end of the week, single digits could extend into the southeast U.S., and a hard freeze could push into central Florida…

New England is expecting up to 2 feet of snow. No doubt temperatures will later be readjusted to reflect the heat wave we must be experiencing according to CO2 levels.

Look at the bright side: at least there are far fewer tornado deaths, despite warmist hysteria. 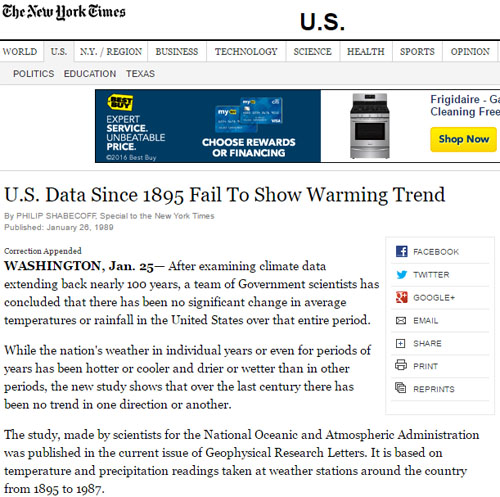 Well well well. What have we here?

On tips from Bodhisattva. Cross-posted at Moonbattery.