By now there is consensus that global warmth is caused by human CO2 emissions, and that this warmth is bad because it causes polar ice to melt, imperiling the noble polar bears and making the seas rise. Of all the carbon released into the atmosphere by people, a large percentage was generated within the past century…

…so let’s see how much Antarctic ice has contracted:

Antarctic sea ice had barely changed from where it was 100 years ago, scientists have discovered, after poring over the logbooks of great polar explorers such as Robert Falcon Scott and Ernest Shackleton.

Experts were concerned that ice at the South Pole had declined significantly since the 1950s, which they feared was driven by man-made climate change.

But new analysis suggests that conditions are now virtually identical to when the Terra Nova and Endurance sailed to the continent in the early 1900s, indicating that declines are part of a natural cycle and not the result of global warming.

It also explains why sea ice levels in the South Pole have begun to rise again in recent years, a trend which has left climate scientists scratching their [mostly empty] heads.

Maybe the ice is just trying to test the faith of believers. 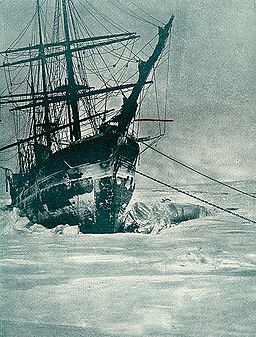 On tips from Bodhisattva, Steve A, and Torcer. Hat tip: Climate Depot. Cross-posted at Moonbattery.