‘Climate Change’ Will Ruin White Christmas’ In The Future Or Something 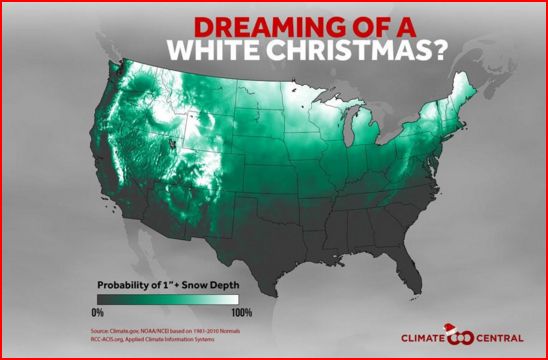 Everything is proceeding as normal, but, doom will soon arrive!

(Seeker[2]) As the calendar works toward Christmas Day, an annual question returns: “Will there be a White Christmas?”

A look at the current snow cover map in the U.S. is actually pretty similar to the historical probability map, with snow (or no snow) in most locations you would expect for this time of year. There are some subtle differences, however, with snow currently covering most of the Dakotas, Michigan, and New York, areas that are usually far from guaranteed to have a white Christmas.

Climate change could wash out white Christmas in areas where they’re already unlikely. Rising temperatures are ensuring that more winter precipitation is falling as rain in many locations across the U.S.

A Climate Central analysis[3] of 65 years of winter precipitation data from more than 2,000 weather stations in 42 states, found a decrease in the percent of precipitation falling as snow in winter months for every region of the country.

Here’s the thing: it doesn’t make it anthropogenic. In fact, there is absolutely nothing unusual from previous Holocene warm periods.

That means that while white Christmases will not disappear in the near future, it is likely they will become less common in places that have become accustomed to them in years past.