It’s So Cold That Iguanas Are Falling From Trees In Florida (and can you guess the cause?) 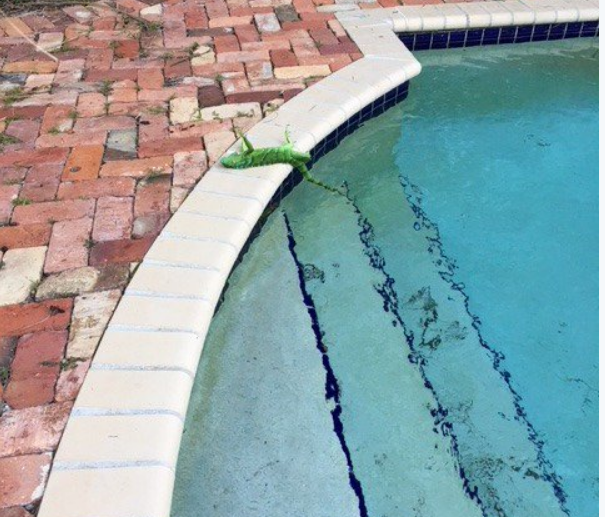 So this is happening in Florida

‘Frozen’ iguanas are falling out of trees in Florida. Please don’t pick them up.

One of the strongest winter storms on the East Coast in modern history[2] has pummeled cities with snow and sleet, forcing schools and businesses to close while grounding thousands of flights[3].

And in South Florida, it is “raining iguanas[4].”

Green iguanas, like all reptiles, are coldblooded animals, so they become immobile when the temperature falls to a certain level, said Kristen Sommers of the Florida Fish and Wildlife Conservation Commission. Under 50 degrees Fahrenheit, they become sluggish. Under 40 degrees, their blood stops moving as much, Sommers said.

They like to sit in trees, and “it’s become cold enough that they fall out.”

It was actually happening so much during that 2008 winter that news media set up cameras to see if people were telling the truth. They were. And the cold can effect bats, which can also fall from trees, along with manatees, sea turtles, and other wildlife which isn’t used to such pervasive cold weather. So, of course

Snow in Florida for the 1st time in 28 years as frozen iguana fall from trees. But of course, climate change is a hoax!? I bet that Paris Climate Agreement is looking pretty good now… #ClimateChangeIsReal[7]

And trump is still in denial about climate change? Even the iguana knows https://t.co/pwol0wplH0[9]

It was so cold in south Florida that iguanas were falling out of trees. I feel like there should be a children’s book about climate change called “Iguana’s Falling From the Sky”. That stuff would terrify me as a child but would def get the message across I feel.

The iguanas have a good chance of thawing out if you move them in the sun. Just be careful @CBS12[12] pic.twitter.com/Qn2w6NFedD[13]