The USA was hit with four major hurricanes in 2005. In those days, our ears rang from the shrill screams of warmists promising that the hurricanes would become ever more ferocious and numerous if we did not submit to their agenda. Since then, the levels of CO2 in the atmosphere have continued to climb. According to global warming theory, we should be experiencing more severe hurricanes than ever. Yet despite Matthew and Sandy coming close to qualifying, we haven’t had any at all:

[Monday] marks the completion of a record-breaking 11 years without a major hurricane striking the U.S. mainland, according to the National Oceanic and Atmospheric Administration (NOAA).

“I can confirm that as of October 24, 2016, it will be a complete 11 years since a major hurricane has struck the United States, as defined by the Saffir-Simpson Hurricane Wind Scale of being a Category 3 or higher,” meteorologist Dennis Feltgen, spokesman for NOAA’s National Hurricane Center (NHC), told CNSNews.com. …

Category 3 and higher hurricanes are characterized by sustained wind speeds of 111 mph or more and strong storm surges that are capable of causing “devastating” or “catastrophic” damage.

The current 11-year stretch with no major hurricane striking the United States is the longest since record-keeping began, according to NOAA data going back to 1851.

Sooner or later, carbon emissions or no carbon emissions, another category 3 hurricane will hit the United States. When it does, leftists will shriek that it was caused by global warming driven by CO2, resulting from insufficient taxation and regulation. People will take them seriously. 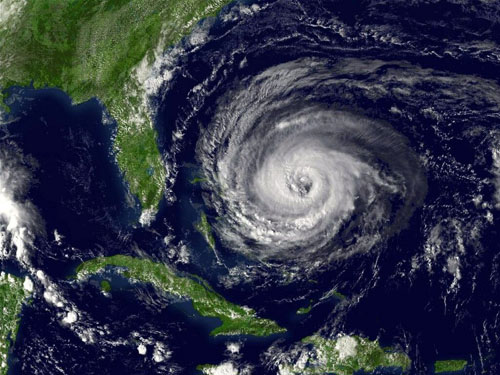 No worries, moonbats. One will hit eventually.