In the middle of the Karakoum (Turkmenistan) desert, close to the tiny nomadic village of Darvaza, there is a crater about 100 meters in diameter and more than 25 meters deep. It is called “Hell’s Door”. Inside this well, a fire has been burning for more than 40 years. 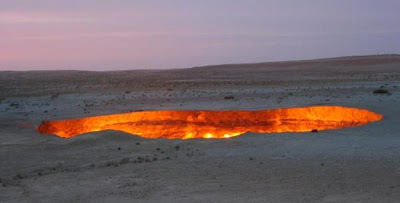 A Soviet prospecting mission began here in the fifties. In 1971, a drilling operation exposed an underground cavity that discharged enormous quantities of gas. Thinking the supply of gas would last but a few weeks, Soviet engineers decided to torch the hole. And it’s been burning ever since. The intense heat coming from the crater allows visitors to approach Hell’s Door only for a few minutes at a time because of the unbearable temperature. 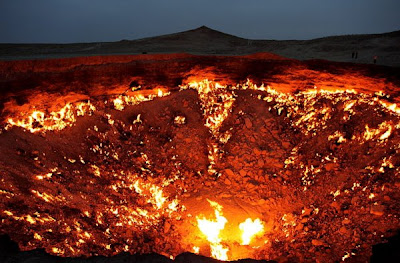 At night, the hole looks like Dante’s Inferno: the fire burns in all its magnificence, giving the well the look of a volcanic burning crater.

But you and I have to give up our incandescent light-bulbs[1].