But, as we’ve seen, most Warmist supporters forget that they’re cult is supposed to be based in environmentalism, and tell us that a few bird deaths are no big deal, not when we’re saving Gaia from catching a fever and having Bad Weather. 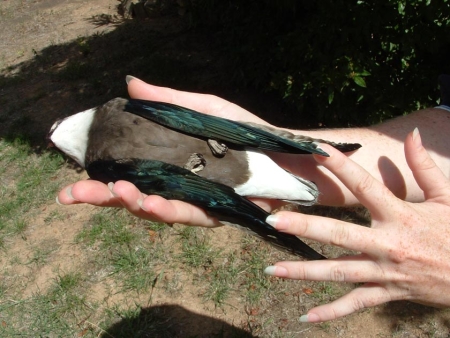 (UK Daily Mail[2]) There had been only eight recorded sightings of the white-throated needletail in the UK since 1846. So when one popped up again on British shores this week, twitchers were understandably excited.

A group of 40 enthusiasts dashed to the Hebrides to catch a glimpse of the brown, black and blue bird, which breeds in Asia and winters in Australasia.

But instead of being treated to a wildlife spectacle they were left with a horror show when it flew into a wind turbine and was killed.

The last time one was seen in the area was 22 years ago. What does a spokesperson for the RSPB (Royal Society for the Protection of Birds) have to say?

‘Wind energy makes a vital contribution towards mitigating the impacts of climate change, which is the biggest threat to our native birds and wildlife.’

Good grief. Do I really need to point out that birds have survived all the hot and cold periods during this inter-glacial, many which were much warmer than this current warm period? That they’ve been around for tens of millions of years?

The same RSPB was having a hissy fit[3] over a bird cull at an airport the other day, yet has no problem with huge numbers of birds being killed by wind farms. James Delingpole[4] notes (in an article I’ve had sitting in my Instapaper account) that the RSPB tends to care more about the wind farms than birds, in relationship to this same issue of the white-throated needletail

Perhaps if this goes on the RSPB should consider a name change. Royal Society for the Prevention of Birds.

Perhaps Warmists should be called “anti-environmentalists”. Wind turbines kill almost 600,000 birds a year in the United States alone, many of them necessary birds of prey and/or protected birds. Worldwide, that estimate can get as high as 40-50 million around the world, which will continue to rise as more are built. Good job, Warmists. Nature haters.