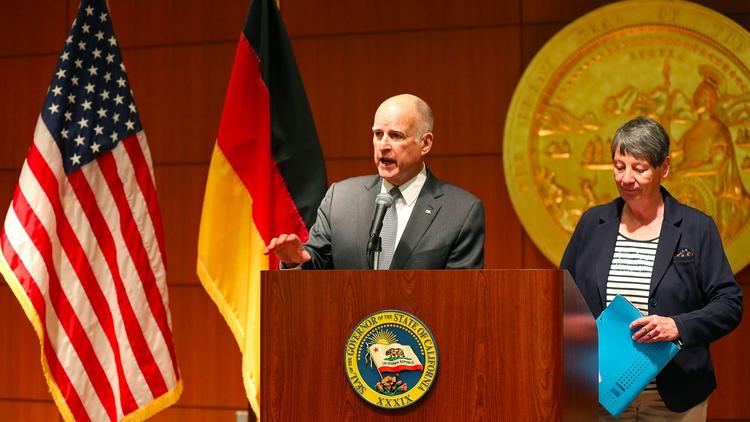 With Trump at the G20 meeting in Germany, the lefties in America can come out to play and make ridiculous, dangerous, stupid political decisions simply to spite the President while he’s too busy ensuring the continuation of the Western World to rebuke their actions.

On Thursday, California’s Governor Jerry Brown spoke via a video message to climate change activists who had gathered at a summit held simultaneously with the G20, where Brown announced that President Trump does not represent the United States as a whole… at least, not on climate change.

Brown said, “Yes, I know President Trump is trying to get out of the Paris Agreement,” before denying that he has any such right to do so. While Trump was not invited to this shadow conference, Gov. Brown invited the hippies who showed up in Hamburg to San Francisco for a “Climate Action Summit” in September 2018.

As reported in the LA Times[2]:

Brown and other American climate crusaders see the G-20 meeting as a crucial moment. Several world leaders who will attend the summit have already signaled that they will confront Trump on climate issues during its proceedings, and a move is afoot to conclude the meeting with a written reaffirmation of commitment to the Paris guidelines that would ostensibly be signed by every G-20 every nation except the U.S. — underscoring how far out of alignment with the rest of the world Trump is on the issue.

Has California fixed their traffic yet? How does Gov. Brown have all this free time? Los Angeles has the worst traffic in the entire world, but Gov. Brown says that the real climate issue isn’t all the cars stuck idling on the poorly maintained freeways that desperately need to be managed better, the real issue is… well, they don’t really have an issue. But I’m sure that it will cost a lot of money and make a lot of hippies very rich in the process.

If you feel like enjoying some left-wing propaganda, his short video is below: