LOL! Bill Nye Gets NASTY Surprise from Group of Scientists

This is funny.[1] Scientists are evidently ganging up on faux-scientist Bill Nye the Science Guy. They are demanding that he share the limelight with actual scientists who know what they are talking about. Not going to happen, but Nye deserves whatever he gets. Maybe they can start a protest… real scientists vs. Bill Nye. I’d donate… how about you? Forbes latched onto the onslaught of tweets to find out where they originated. Dani Rabaiotti, who studies the effect of climate change on African wild dogs at University College London, and apparently “wrote a book on animal farts,” was ground zero in tweeting Nye. I kid you not… irony by the truckload.

At issue here for Rabaiotti is basically that a) Nye is not a scientist and b) is doing something that makes it apparent he’s not a scientist. “In science what you do is say, ‘oh, that’s not my area of expertise, but here is someone who knows the answer,'” said Rabaiotti. In other words, you defer to someone who actually knows what they are talking about. “In an ideal world, Bill Nye will see it and say, ‘wow, look at all these awesome scientists,'” said Rabaiotti. “But even if that doesn’t happen, there’s been a lot of engagement with the thread.” Nye will never, ever do that. He’s far too arrogant.

Bill Nye “The Science Guy” just had the unasked for pleasure of meeting a whole lot of people who are actually in the field he has so long presented himself as an expert in. Under the hashtag #BillMeetScienceTwitter[3], Nye was flooded with thousands of tweets Friday from annoyed scientists who decided it was high time for Nye to start sharing the spotlight with people who are actually credentialed experts rather than former-child-entertainers-turned-hysterical-leftwing-activists[4].

Forbes[5] picked up on Nye’s epic deluge of tweets and did a little digging to find out what was motivating it. The originator of the hashtag was Dani Rabaiotti, who studies the effect of climate change on African wild dogs at University College London, and apparently “wrote a book on animal farts.” Here is her original tweet introducing herself to Nye:

Hi @BillNye[6] I'm Dani and I study the effect of climate change on African wild dogs, and wrote a book on animal farts #BillMeetScienceTwitter[7] pic.twitter.com/X3CMB60b3f[8]

Rabaiotti says the new hashtag was born during a discussion she had on Twitter with New Zealand-based marine biologist Melissa Marquez and Missouri-based entomologist Dalton Ludwick. The emotion behind their new social media blitz is something scientists have been quietly grumbling about for a while, Rabaiotti says:

Why can’t the “dude in a lab coat” on T.V. share his spotlight with a more real-life, diverse swath of science experts?[10]

The hashtag campaign, #BillMeetScienceTwitter, took off big time, much to the horror of Bill Nye. On Friday alone, Nye’s Twitter account was overwhelmed with what Forbes reports was “more than 3,400 tweets and introductions[11]” from scientists introducing themselves in the vain hope that he would actually defer to them in future discussions on scientific topics. They will be waiting a literal eternity.

A number of people who aren’t scientists couldn’t resist either and it was hysterical. Nye eventually tweeted back, no doubt impressed by his own supposed brilliance (not): “I see you, Science Twitter. You are the aerodynamic laminar flow beneath my wings. #BIllMeetScienceTwitter.” Lame. He gets a couple of points for knowing what ‘aerodynamic laminar flow’ means. Yeah, it’s called Google. The featured quote on Nye’s Twitter account currently is: “Everyone you will ever meet knows something you don’t.” How true that is for Bill Nye.

Bill Nye + Neil deGrasse Tyson = scientists w BIG following… but do they really engage with public or do they just preach?

Hi Bill, it's Amanda, next time someone asks you are teaching/learning evolution send them my way, it's what I do #BillMeetScienceTwitter[7] pic.twitter.com/TbhyeF9KJh[13] 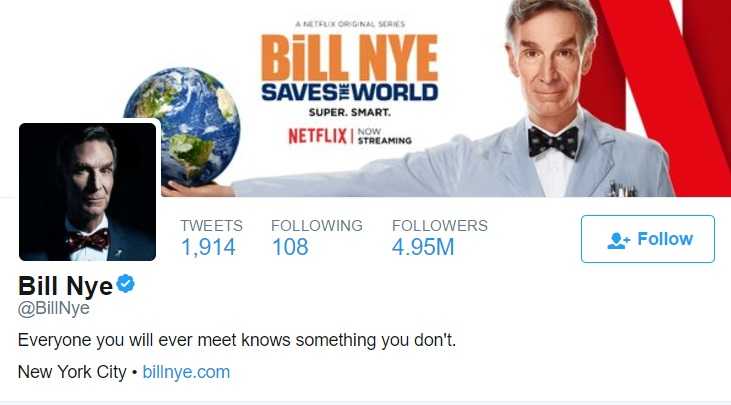