It’s amazing: we’re now told that the models are wrong. But Mankind is still to blame

Computer modelling used a decade ago to predict how quickly global average temperatures would rise may have forecast too much warming, a study has found.

The Earth warmed more slowly than the models forecast, meaning the planet has a slightly better chance of meeting the goals set out in the Paris climate agreement, including limiting global warming to 1.5C above pre-industrial levels.

Scientists said previous models may have been “on the hot side”.

The study, published this week in the journal Nature Geoscience[3], does not play down the threat which climate change has to the environment, and maintains that major reductions in emissions must be attained.

But the findings indicate the danger may not be as acute as was previously thought.

Myles Allen, professor of geosystem science at the University of Oxford and one of the study’s authors told The Times: “We haven’t seen that rapid acceleration in warming after 2000 that we see in the models. We haven’t seen that in the observations.”

Remember back to Dr. Roy Spencer stating that the real consensus was 95%, as in, 95% of the models were wrong[4] 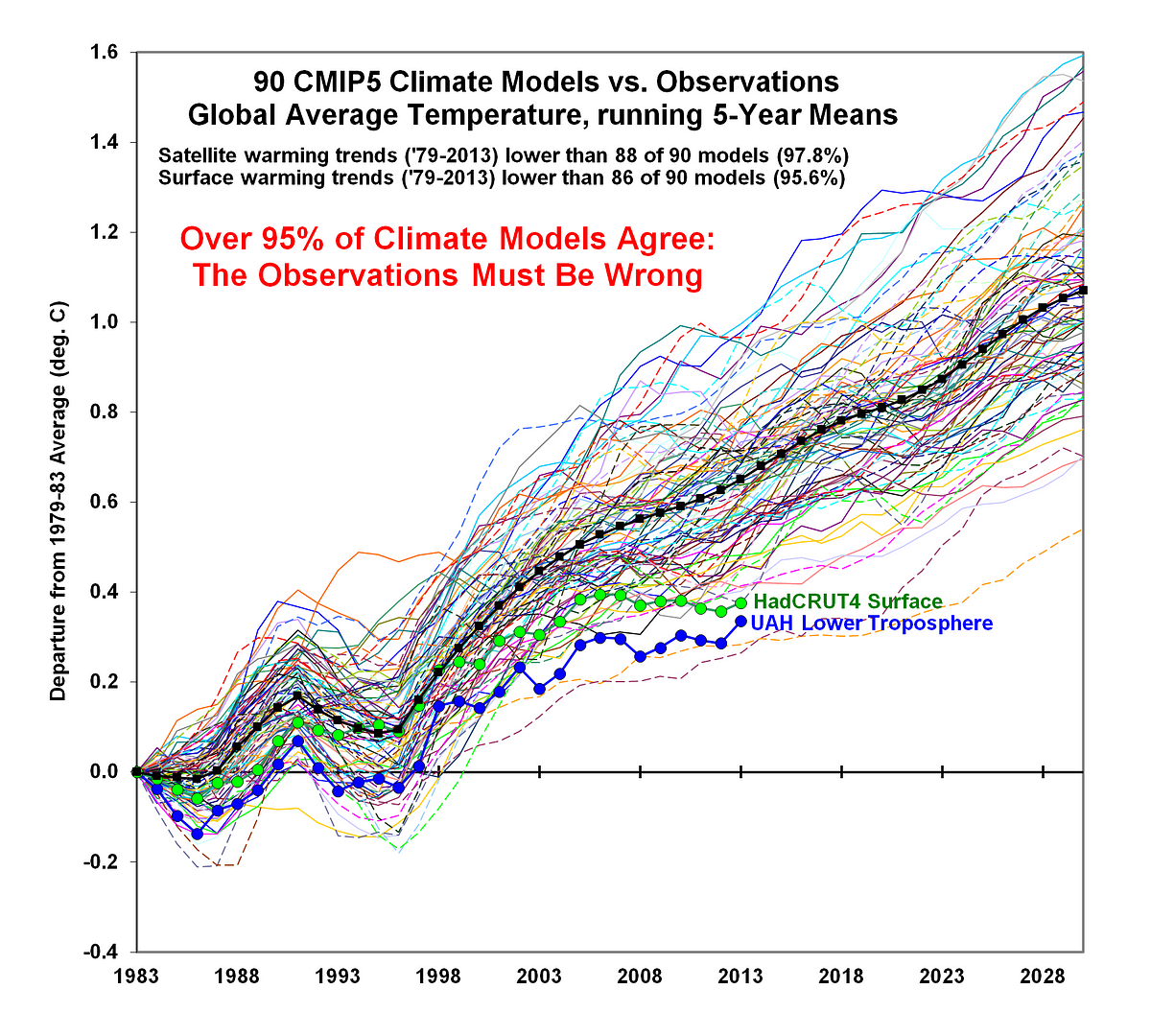 He did this back in 2014. Looks like the Warmists are attempting to actually redo their models while still attempting to Blamestorm Mankind’s “carbon pollution.” They are still calling for “carbon budgets”, which would, of course, include carbon taxes and fees, more government control of citizens, economies, private entities, and the energy sector, and more loss of freedom coupled with a higher cost of living.

At the Paris climate summit in 2015, Professor Grubb said: “All the evidence from the past 15 years leads me to conclude that actually delivering 1.5C is simply incompatible with democracy.”

But speaking to The Times he said: “When the facts change, I change my mind, as [John Maynard] Keynes said.

Grubb is claiming that the facts have changed. Which they haven’t. Climate skeptics have been saying for years that the IPCC climate models have been running “too hot.” Indeed, the Global Warming Policy Foundation produced a paper stating this three years ago. Naturally it was ignored by alarmists who have always sought to marginalize the GWPF as a denialist institution which they claim – erroneously – is in the pay of sinister fossil fuel interests.

Exactly. The facts have not changed. The facts are the actual observations (well, the kinda do change, as the Warmists adjust, massage, smooth, and simply make up the data), and the observations disagree with the computer models, as Dr. Spencer noted.

1) We have known for several years that the climate models have been running far too hot.

This rather belated admission is welcome, but a cynic would wonder why it was not made before Paris.

2) I suspect part of the motivation is to keep Paris on track. Most observers, including even James Hansen, have realised that it was not worth the paper it was written on.

This new study is designed to restore the belief that the original climate targets can be achieved, via Paris and beyond.

3) Although they talk of the difference between 0.9C and 1.3C, the significance is much greater.

Making the reasonable assumption that a significant part of the warming since the mid 19thC is natural, this means that any AGW signal is much less than previously thought.

4) Given that that they now admit they have got it so wrong, why should we be expected to have any faith at all in the models?

5) Finally, we must remember that temperatures since 2000 have been artificially raised by the recent record El Nino, and the ongoing warm phase of the AMO.

Powerline[7] digs into the story, and comes up with an interesting tidbit, in regards to the Professor Grubb quote above

At the Paris climate summit in 2015, Professor Grubb said: “All the evidence from the past 15 years leads me to conclude that actually delivering 1.5C is simply incompatible with democracy.” [Emphasis added.] [Teach made quote from article red]

A revealing slip of the mask, no? And what a disappointment that the climatistas will still have to put up with elections and the people and such. Authoritarianism is so much more fun.

This is pretty much a vindication of what Skeptics have been saying for well over a decade, and exposes what I’ve been writing and saying for a long time: this is fake science designed to prop up Progressive (nice Fascist) ideology and policy pushes.

But, don’t for one minute think they’ll stop. To paraphrase The Terminator “Listen, and understand! That Warmists are out there! They can’t be bargained with. They can’t be reasoned with. They don’t feel pity, or remorse, or fear. And they absolutely will not stop… ever, until you are paying lots of taxes!”