The Most Powerful Weapon: Kerry Calls for Shaming to Bully Countries Over Climate Change

What a horrific joke this climate pact is.[1] On top of trying to force the US to pay other countries $100 billion a year as a wealth redistribution scam, John Kerry is now coming out and claiming they will ‘shame’ other countries into complying. Kerry says that shaming and condemnation are the most powerful weapons to bring countries into line with climate change mandates. Right. I can just see these morons shaming China or India into cutting carbon emissions. Globalist bullying much? It gets worse and even more stupid and lame… while discussing the global climate change agreement made in Paris over the weekend, Kerry acknowledged on Fox News Sunday[2] that there wouldn’t have been an agreement at all if there were binding penalties for countries not meeting emissions standards. Do tell. 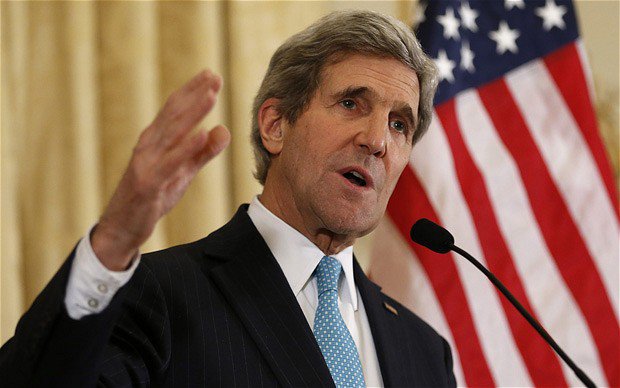 Secretary of State John Kerry said on Sunday that international shame and condemnation is “the most powerful weapon in many ways” to ensure countries comply with the newly-signed climate change accord reached in Paris, which is meant to lower greenhouse gas emissions around the world.

Appearing on NBC’s Meet the Press, Kerry defended the merits of the climate agreement, but host Chuck Todd challenged him on how the deal will be implemented.

“There’s a lot of pledges. There’s a lot of promises. But there seems to be no mechanism for getting countries to comply other than wagging your finger at them and shaming them. Am I wrong?” Todd asked.

“Well that’s the most powerful weapon in many ways,” Kerry replied, “but it’s not the only weapon. And, in fact, we think that there are other powerful weapons.”

Kerry said President Obama has been able to move action on climate change in the United States not just by enforcement mechanisms but also “by setting policy,” which he says took place in Paris with this agreement.

You see, this isn’t a binding agreement at all. It’s a plan to rip off citizens across the globe and line the pockets of elitists while implementing harsher controls over the riff raff, the common man, out there. President Obama, Kerry said, was determined to “get an agreement that would move the world in the right direction.” As such, Kerry said that the “best thing we can do” to get countries to reduce their carbon emissions was a “mandatory reporting requirement.” Seriously? You weenies believe putting something on paper makes it so? What buffoons. In a bit of circular logic, Kerry said that countries would have to retool their reduction levels every five years to meet their commitments, but he couldn’t say there was anything beyond their own word to force them to so. This is just ridiculous and nonsensical. The only thing for sure here are the carbon taxes that will descend on all of us. Kerry said it is expected that the world will invest about $50 trillion into energy over the next 30 or 40 years, and that will be one of the main factors causing countries to “spontaneously move in this direction, because there’s jobs to be created, money to be made, and there’s a population to respond to in terms of the demand of their citizens.” In other words, there is money to be had and corruption to wallow in. Just swell.