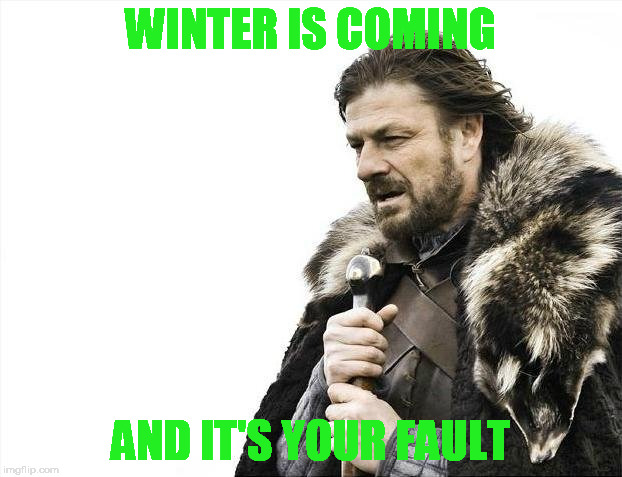 With any type of event, especially weather, what you end up with is a few smatterings, a few rumbles, linking the event to Hotcoldwetdry. There were a few tweets, many which screeched curse words at Donald Trump for not being a Warmist, and then boom! Tons of them starting Monday. And, then we get the fables

(Daily Caller[2]) Winter Storm Stella hasn’t even struck the northeastern U.S., but that hasn’t stopped at least one media pundit from linking the storm to man-made global warming.

Stella is expected to bring up to 2 feet of snow to New York City and Boston through Tuesday. Washington, D.C., and Baltimore are expected to get between 8 and 10 inches of snow, no doubt sending the region into “Mad Max”-style anarchy.

By any measure, Stella looks like a big storm, but the only certainty about the storm is it, like pretty much every other extreme weather event, will be linked to global warming.

Climatologist and environmental writer Eric Holthaus couldn’t help himself. He had to link the storm to man-made global warming[3] in a Daily Beast article. Holthaus wrote that “[t]wo studies published last year argue that climate change may be making the ingredients for big East Coast snowstorms more likely.” (snip)

Holthaus didn’t stop with one article on the subject. He wrote a second post for the blog Grist[4], arguing: “We’re not just getting freak weather anymore. We’re getting freak seasons.”

Of course he did. A nice guy, from my interactions with him on Twitter, but, deluded. Both those fables are repeated, as I’m finding, around the news media, such as here[5]. He’s not the only one, as you may well know 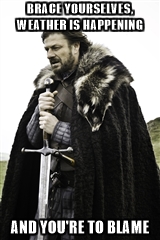 While March snow is not unheard of, aspects of this storm are suggestive of erratic weather patterns that have arisen in recent years, said NASA climate scientist and Columbia University researcher Justin Mankin.

“One of our expectations of global warming is an average decrease in snow, but also an increase in snowfall extremes,” he said.

“There is a robust expectation of increased extreme weather events. Increasingly the climate science community has been able to attribute the risk of occurrence of those weather extremes to global warming.”

Writer Amanda Mikelberg never bothered doing that whole Journalism thing and ask other scientists, because that wouldn’t serve the Narrative.

Then we have Anna Swartz[8] telling us that snow not only doesn’t disprove AGW, but is caused by AGW. Slate[9] says it’s not necessarily caused or linked to ‘climate change’, but, then goes on to say it’s ‘climate change.’ And plenty more. As Roy Spencer[10] writes

The Nor’easter and cold temperatures will be blamed on the same climate change that caused the unusual warmth over the eastern U.S.[11] over the past couple months.

Global warming theory is in fact so malleable that it predicts anything. More cold, less cold. More snow, less snow.

What a powerful theory.

And what’s even more amazing is that climate change can be averted by just increasing your taxes.

He should have used my terminology, as in “can be averted with Everyone Else’s[12] taxes.”