Wow… I barely recognized Al Gore here.[1] I guess time does a number on everyone… even grasping, manipulative liars like Gore. He appeared on Fox News with Chris Wallace to do an interview on climate change and probably to promote his upcoming new documentary. Wallace started grilling him on his popular 2006 documentary “An Inconvenient Truth.” That one was full of blatant lies and CGI to make things look as alarming as possible.

When Wallace started laying into Gore over his claims that never materialized, Al got testy. “Weren’t you wrong?” Wallace asked. “No,” Gore replied. “Well we have seen a decline in emissions on a global basis. For the first time they’ve stabilized and started to decline. So some of the responses for the last 10 years have helped, but unfortunately and regrettably a lot of serious damage has been done.” What a lying piece of crap. This is the same asshat who claims he has a zero carbon footprint. I don’t think he even knows what the truth is anymore. 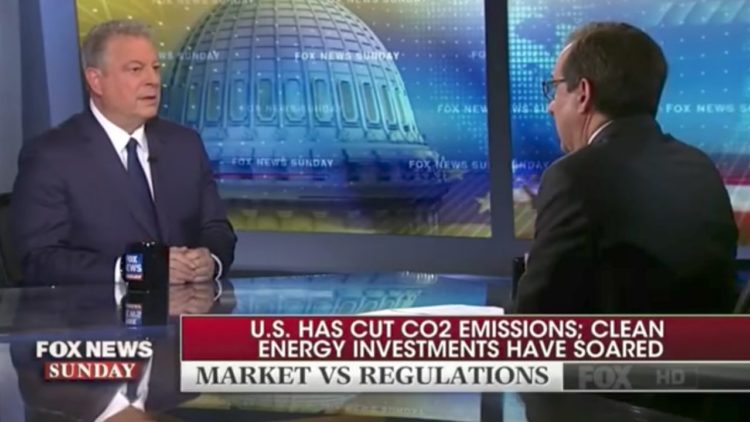 The more than 10-minute interview was mostly civil until Wallace confronted Gore over the faulty claims. Wallace reminded Gore that in his documentary he claimed that unless the world “took drastic measures the world would reach a point of no return within 10 years.”

Wallace added that in his publicity of the movie, Gore claimed that if the world didn’t act, man-made global warming would result in a “true planetary emergency.”

Many predictions made by scientists and other climate change alarmists like Gore have failed to come true. For example, in 2007 Gore predicted[3] that the summer Arctic ice in the North Pole would completely disappear by 2013 due to global warming caused by carbon dioxide emissions.

That, however, never came true. The same can be said for many of Gore’s claims and that’s exactly what Wallace confronted him over.

And here’s a slice of utter delusion for you: “Greenland, for example, has been losing one cubic kilometer of ice every single day. I went down to Miami and saw fish from the ocean swimming in the streets on a sunny day. The same thing was true in Honolulu just two days ago, just from high tides because of the sea level rise now,” he added. LOL! Too funny. The sea level is not rising. There is absolutely no proof or facts to back that outrageous claim. Geez.

Gore did say that now we are only going to face ‘some’ of the consequences he predicted before. “We are going to suffer some of these consequences, but we can limit and avoid the most catastrophic consequences if we accelerate the pace of change that’s now beginning,” Gore said. He means carbon taxes where he can get even more filthy rich off fools who buy this crap. Among other predictions Gore made that never came true was his claim that storms would become more intense and the world would see stronger hurricanes on a more frequent basis. He also claimed Mt. Kilimanjaro in Africa would lose it’s snowpack by 2016. But that also hasn’t happened — not even close. This guy is a joke and a charlatan, just like climate change is.