20 Liberal Calls For Violence Against Conservatives in Quotes 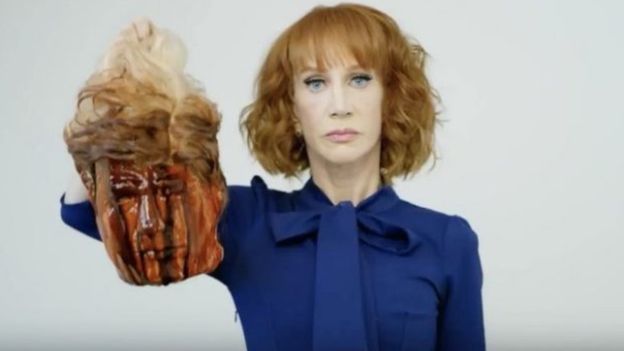 After Republican Rep. Steve Scalise was shot yesterday, many liberals on twitter CELEBRATED[2] and said things like,

“The Only Good Fascist is a Dead One.”

“If the shooter has a serious health condition then is taking potshots at the GOP leadership considered self defense?”

Is it any wonder? The most prominent liberals in America regularly accuse conservatives of being racist, sexist, Nazis, fascists who want children to die and are killing the planet and ruining the environment all because of their hate of the poor and minorities. Liberals today aim a nastier stream of propaganda at Republicans than America did at the Nazis; so is it any wonder that some people take the next logical step and become violent?

Meanwhile, you have plays, rap videos and prominent liberals glorifying the murder of the President, liberals applauding unrepentant terrorists like Bill Ayers, all while cops at left-wing universities stand back and allow violent students to riot, threaten and disrupt conservative speakers. We’re moving fast towards a point where clashes between armed gangs of thugs on both sides will leave people dead because liberals believe conservatives aren’t human beings and thus, don’t deserve the same protection under the law.

I’m not going to blame Bernie Sanders for the shooter who supported him or say that liberals and Democrats should be held personally responsible for it. The only person responsible for what the shooter did was the shooter. However, this sort of political violence is doomed to grow ever more common and bloodier unless liberal Democrats start changing the sort of rhetoric they engage in on a regular basis. Rhetoric like this…

1) “Michele (Bachmann), slit your wrist. Go ahead… or, do us all a better thing [sic]. Move that knife up about two feet. Start right at the collarbone.” — Montel Williams[3]

2) “F*ck that dude. I’ll smack that f*cker’s comb-over right off his f*cking scalp. Like, for real, if I met Donald Trump, I’d punch him in his f*cking face. And that’s not a joke. Even if he did become president — watch out, Donald Trump, because I will punch you in your f*cking face if I ever meet you. Secret Service had better just f*cking be on it. Don’t let me anywhere within a block.”– Rapper Everlast[4] on Donald Trump

3) “I have zero doubt that if Dick Cheney was not in power, people wouldn’t be dying needlessly tomorrow….I’m just saying if he did die, other people, more people would live. That’s a fact.” — Bill Maher[5]

4) “I know how the ‘tea party’ people feel, the anger, venom and bile that many of them showed during the recent House vote on health-care reform. I know because I want to spit on them, take one of their “Obama Plan White Slavery” signs and knock every racist and homophobic tooth out of their Cro-Magnon heads.” — The Washington Post’s Courtland Milloy[6]

6) “Are you angry? [Yeah!] Are you angry? [Yeah!] Are you angry? [Yeah!] Well, we’ve been watching intifada in Palestine, we’ve been watching an uprising in Iraq, and the question is that what are we doing? How come we don’t have an intifada in this country? Because it seem[s] to me, that we are comfortable in where we are, watching CNN, ABC, NBC, Fox, and all these mainstream… giving us a window to the world while the world is being managed from Washington, from New York, from every other place in here in San Francisco: Chevron, Bechtel, [Carlyle?] Group, Halliburton; every one of those lying, cheating, stealing, deceiving individuals are in our country and we’re sitting here and watching the world pass by, people being bombed, and it’s about time that we have an intifada in this country that change[s] fundamentally the political dynamics in here. And we know every – They’re gonna say some Palestinian being too radical — well, you haven’t seen radicalism yet.” U.C. Berkeley Lecturer Hatem Bazian[8] fires up the crowd at an anti-war rally by calling for an American intifada

8) “..And then there’s Rumsfeld who said of Iraq ‘We have our good days and our bad days.’ We should put this S.O.B. up against a wall and say ‘This is one of our bad days’ and pull the trigger. Do you want to salvage our country? Be a savior of our country? Then vote for John Kerry and get rid of the whole Bush Bunch.” — From a fund raising ad put out by the St. Petersburg Democratic Club[9]

9) “Republicans don’t believe in the imagination, partly because so few of them have one, but mostly because it gets in the way of their chosen work, which is to destroy the human race and the planet. Human beings, who have imaginations, can see a recipe for disaster in the making; Republicans, whose goal in life is to profit from disaster and who don’t give a hoot about human beings, either can’t or won’t. Which is why I personally think they should be exterminated before they cause any more harm.” — The Village Voice’s Michael Feingold[10], in a theater review of all places

10) “But the victim is also inaccurately being eulogized as a kind and loving religious man. Make no mistake, as disgusting and deservedly dead as the hate-filled fanatical Muslim killers were, Thalasinos was also a hate-filled bigot. Death can’t change that. But in the U.S., we don’t die for speaking our minds. Or we’re not supposed to anyway. Thalasinos was an anti-government, anti-Islam, pro-NRA, rabidly anti-Planned Parenthood kinda guy, who posted that it would be “Freaking Awesome” if hateful Ann Coulter was named head of Homeland Security.” — Linda Stasi, New York Daily News[11],on a victim murdered in the San Bernadino terrorist attack

12) “If I had my way, I would see Katherine Harris and Ken Blackwell strapped down to electric chairs and lit up like Christmas trees. The better to light the way for American Democracy and American Freedom!” — Democratic Talk Radio’s Stephen Crockett[13]

13) “May your children all die from debilitating, painful and incurable diseases.” — Allan Brauer[14], the communications chair of the Democratic Party of Sacramento County to Ted Cruz staffer Amanda Carpenter

15) “I hope Roger Ailes dies slow, painful, and soon. The evil that man has done to the American tapestry is unprecedented for an individual.” — Think Progress editorAlan Pyke[18]

16) “But, you know, the NRA members are the current incarnation of the brownshirts from Germany back in the early ’30s, late ’20s, early ’30s. Now, of course, there came the Night of the Long Knives when the brownshirts were slaughtered and dumped in the nearest ditches when the power structure finally got tired of them. So I look forward to that day.” — Mike Malloy[19]

17) “Or pick up a baseball bat and take out every f*cking republican and independent I see. #f*cktrump, #f*cktheGOP, #f*ckstraightwhiteamerica, #f*ckyourprivilege.” — Orange is the New Black star Lea DeLaria[20] responding to a meme about using music to deal with violence

19) “Sarah Palin needs to have her hair shaved off to a buzz cut, get headf*cked by a big veiny, ashy, black d*ck then be locked in a cupboard.” — Azealia Banks[22] advocates raping Sarah Palin over a fake news story

20)” Yes, I’m angry. Yes, I’m outraged. Yes, I have thought an awful lot about blowing up the White House, but I know that this won’t change anything.” — Madonna[23]