“While the rest of the country waves the flag of Americana, we understand we are not part of that. We don’t owe America anything – America owes us.” — Al Sharpton[1]

“For the first time in my adult lifetime, I am really proud of my country. And not just because Barack has done well, but because I think people are hungry for change.” —Michelle Obama[2] 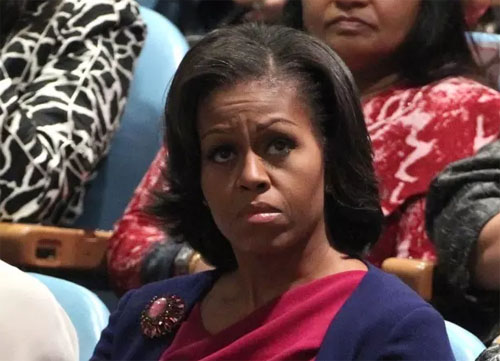 “The US is indeed a terrorist nation. …It’s also the greatest purveyor of violence on earth over the past half century, and the foremost threat to world peace today.” – Bill Ayers[4]

“I hate to say it, but killing is our way. We began America with genocide, then built it with slaves. The shootings will continue. It’s who we are.” — Michael Moore[5]

Liberals love America like O.J. loved Nicole. Like Andrea Yates loved her kids. Like the Manson family loved Sharon Tate. They cheer people who disrespect the flag, trash America at every opportunity and knowingly favor policies that hurt the country and make it weaker.

However, the $64,000 question is WHY do they do this? Why do surveys consistently show that liberals (admittedly with some exceptions) are much less patriotic than conservatives[6]? Here are people living in the world’s only superpower. This is a rich, prosperous nation that is the envy of the planet; yet liberals trash America so much that you expect them to move elsewhere (if only). Of course, America’s success is a big part of the problem for liberals because you see….

1) Liberals Think Success Is De Facto Unjust: Liberals, being liberals, give each other a pass for just about anything because they believe that they’re on the side of the angels (if they believe in angels) by default, just by virtue of being liberal. However, liberals also habitually assume that success is the result of unfairness and cheating the system while failure is evidence of unrewarded virtue. That’s why they incessantly rail against rich people not named Buffet, Soros, Clinton and Kennedy. It’s why they side with homicidal Palestinians over Israelis just trying to protect themselves.  It’s why they dislike America. After all, if we’re the richest, strongest, most successful nation in the world, to them it means we must have gotten our success illegitimately and we need to be cut down to size.

2) History Can Be Skewed: Most people are not students of history, but liberals are at a particular disadvantage because there are popular liberal authors who deliberately skew the history of the United States. Extremely popular lefty authors like Noam Chomsky and Howard Zinn basically start with the presumption that the United States always does the wrong thing and is the cause of all evil in the world. Liberals who don’t know enough about history to realize that they’re reading a funhouse mirror version of events can get a very false picture of the United States that’s hard to correct with the truth. That’s because as the late, great Eric Hoffer said, “An empty head is not really empty; it is stuffed with rubbish. Hence the difficulty of forcing anything into an empty head.”

3) Conservatives Are Patriotic: Liberals can’t win a fight with logic; so they rely on controlling access to the mainstream media and convincing people that conservatives are so racist, so evil, so monstrous that people shouldn’t even listen to our arguments. One of the side effects of this is that liberals tend to have a knee jerk opposition to any and all things “conservative.” There’s nothing inherently conservative about being patriotic, but there’s also nothing inherently conservative about wanting low taxes. In fact, liberals used to love low taxes[7] until Jack Kemp and Ronald Reagan championed the idea. Liberals could support low taxes, oppose a minimum wage increase or fix Social Security using the exact same arguments that conservatives do and they’d be smart to do that. The reason they don’t is that if conservatives support those positions, those positions must be bad by default and they’ll come up with reasons to justify that opinion afterward. Liberals may not know a lot about the way that the world works, but they do know that if conservatives love to talk about how great America is and wave the flag, that’s not something they should be doing.

4) Liberals Draw Self-Esteem From Taking Positions That Make Them Appear More Sensitive Than other People: As Thomas Sowell [8]has said, “The very commonness of common sense makes it unlikely to have any appeal to (liberals). How can they be wiser and nobler than everyone else while agreeing with everyone else?” Loving and supporting the greatest country in the world if you’re a U.S. citizen is so obviously common sense that it can’t possibly appeal to liberals. How do liberals feel good about themselves when they’re waving a flag like those NASCAR people? What, are they going to wear flag pins like those Tea Partiers? Inside every chest of every liberal is the heart of a Colin Kaepernick and if it weren’t for social pressure, few of them would ever rise for the national anthem. When you build an entire identity around falsely believing that you’re more sensitive, compassionate and wise than other people, you have to distinguish yourself from those you believe are your inferiors by virtue of not sharing your ideology.

5) Liberals Are Utopians. Liberals are the sort of people Machiavelli [9]described when he said, “And many writers have imagined for themselves republics and principalities that have never been seen or known to exist in reality; for there is such a gap between how one lives and how one ought to live that anyone who abandons what is done for what ought to be done learns his ruin rather than his preservation: for a man who wishes to profess goodness at all times will come to ruin among so many who are not good.” Ironically, since so many liberals are hostile to Christianity, liberals are always trying to create a heaven on earth where everything is perfectly “fair,” nobody is “mean” and there are no more problems for anyone. The issue with this is that the only way liberals can create their utopia is with stifling control. If some people do better than others, that’s not “fair.” If people do and say what they want, that’s “mean.” If there’s a problem people (well, people they like anyway) are having, it must be addressed by the government with new laws that will force everyone to behave a certain way. Liberals are always looking to get more control to create their utopia and the best way to do this is to create problems that will be “solved” by giving liberals more power. So, if you say, “America is one of the least racist countries in the world,” “The U.S. is the greatest country in the world,” or even, “The Constitution is the best founding document of any nation,” they can’t stand it because if things are pretty good and all we really need to do is get the government out of people’s way, there’s no need for liberals.