Have you heard about Hillary Clinton’s new book, What Happened?. She could have saved everyone time by just writing out a list called The 349 People, Places And Things Other Than Myself That I Blame My Failure On….. She lost because of Bernie Sanders. Because of white people. Because of “Bernie Bros,” sexism, and Russians. Because the press coverage wasn’t favorable enough. If you can come up with an excuse, she put it in the book somewhere. 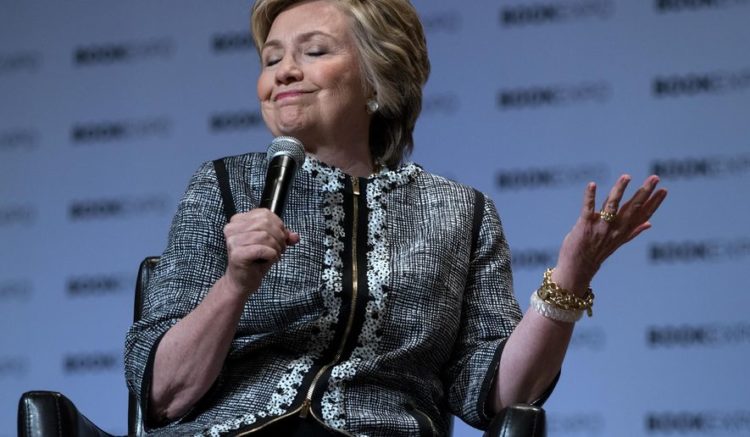 At one point, while doing the publicity tour for this monstrosity, she actually said, “What makes me such a lightning rod for fury? I’m really asking. I’m at a loss.” So, as a public service to Hillary Clinton and the legions of her fans who seem to think she’s practically perfect (No, really. I’ve been listening to them for months on Twitter[2]. It’s bizarre), I’ve put together this short, handy list explaining reasons why so many people hate Hillary Clinton that go beyond her socialistic political beliefs. Granted, there are many other things we could add from her horrible cackle to the fact she seems like the most scripted person on earth to her ridiculous lies (I landed under sniper fire in Bosnia) to the hypocritical way she treated the women her husband abused, but let’s just hit the high points, shall we?

#1) Her whole campaign could have been boiled down to “Vote for me because I’m a woman:” Being a woman isn’t a qualifier for being President. In and of itself, it’s not even a qualifier for being a Hooter’s waitress. The insulting assumption that she was owed votes because she’s female and that people who disliked her were automatically sexist was incredibly annoying, especially after eight years of being told that everyone who disagreed with Obama was a racist. In fact, Hillary can insultingly chalk it all up to sexism if she likes, but as my friend Amanda Carpenter[3] said, “Hillary’s problems with likability aren’t problems shared by our whole gender no matter how much she wishes it so.”

#2) Hillary’s entire claim to fame is being married to Bill: If Tom Brady gets hurt tomorrow, your top choice to replace him as quarterback wouldn’t be his wife. Take Bill out of the equation and Hillary would have been lucky to have a career as a town councilwoman in Dung Heap, Arkansas. Say whatever you want about someone like Sarah Palin, but at least she earned her spot at the top and didn’t just glom on to the right man while shouting some variation of “Girl Power” every 5 minutes.

#3) She’s hopelessly corrupt: This is a woman who got away with taking bribes via cattle futures when her husband was in the Arkansas governor’s mansion, using her position as Secretary of State to do pay for play with the Clinton Foundation and offloading classified data onto an illegal, private server. We hear endless complaining from Hillary and her supporters about James Comey, but he started preparing to exonerate Clinton before the investigation was even over. That’s typical. I’d be in jail if I’d done 1/10 of what Hillary has done. So would you. So would any Republican, including Donald Trump. But, all of us have learned that Hillary will always get special treatment and it disgusts most people. You can talk about non-existent “white privilege” or any other type of privilege you want, but nothing will ever beat “Clinton privilege.”

#4) She felt entitled to be President because of her last name: When the GOP primary cranked up, Jeb Bush was the presumptive nominee. He had amassed an enormous war chest; his last name was Bush and he didn’t really seem to care that much about what all the peasants who would be voting in the primaries thought. We all know how that worked out. Jeb got his clock cleaned. Well, Hillary was the Jeb candidate on the Left (except much less qualified) and the reaction to her was even more negative because her smug insistence that the presidency was hers based on her gender and last name was rewarded with the Democrat nomination.

#5) She’s simply not a very nice person: Conservatives remember when Hillary callously said, “I can’t be responsible for every undercapitalized small business in America,” when she was asked about her health care plan bankrupting small businesses. They didn’t miss it when she listed “Republicans” among her enemies at a Democrat debate. They recall her saying, “You know, to just be grossly generalistic, you could put half of Trump’s supporters into what I call the basket of deplorables. Right? The racist, sexist, homophobic, xenophobic, Islamaphobic — you name it.” It did not slip past them when Wikileaks leaked out this comment from John Podesta, “I know she has begun to hate everyday Americans, but I think we should use it once the first time she says I’m running for president because you and everyday Americans need a champion.” They’ve seen the stories about her demanding “White House workers never speak to her and hide behind the drapes” when she came around. They heard her laugh while discussing getting a man who raped a 12 year old girl off easy[4]. They saw the stories about the abusive way she treated the Secret Service agents who were ready to take a bullet to save her life[5]. This is not someone you want to hang out with, have a beer with or be on the same planet with unless it’s absolutely necessary.