The Romans spent almost 500 years as a republic before Julius Caesar’s adopted son Augustus became the first Roman emperor. The Romans moved on from having kings to becoming the first republic, to sliding backward into monarchy and tyranny and it’s not impossible that America will follow a similar trajectory.  In fact, if you study Roman history, it’s not hard to see the parallels. 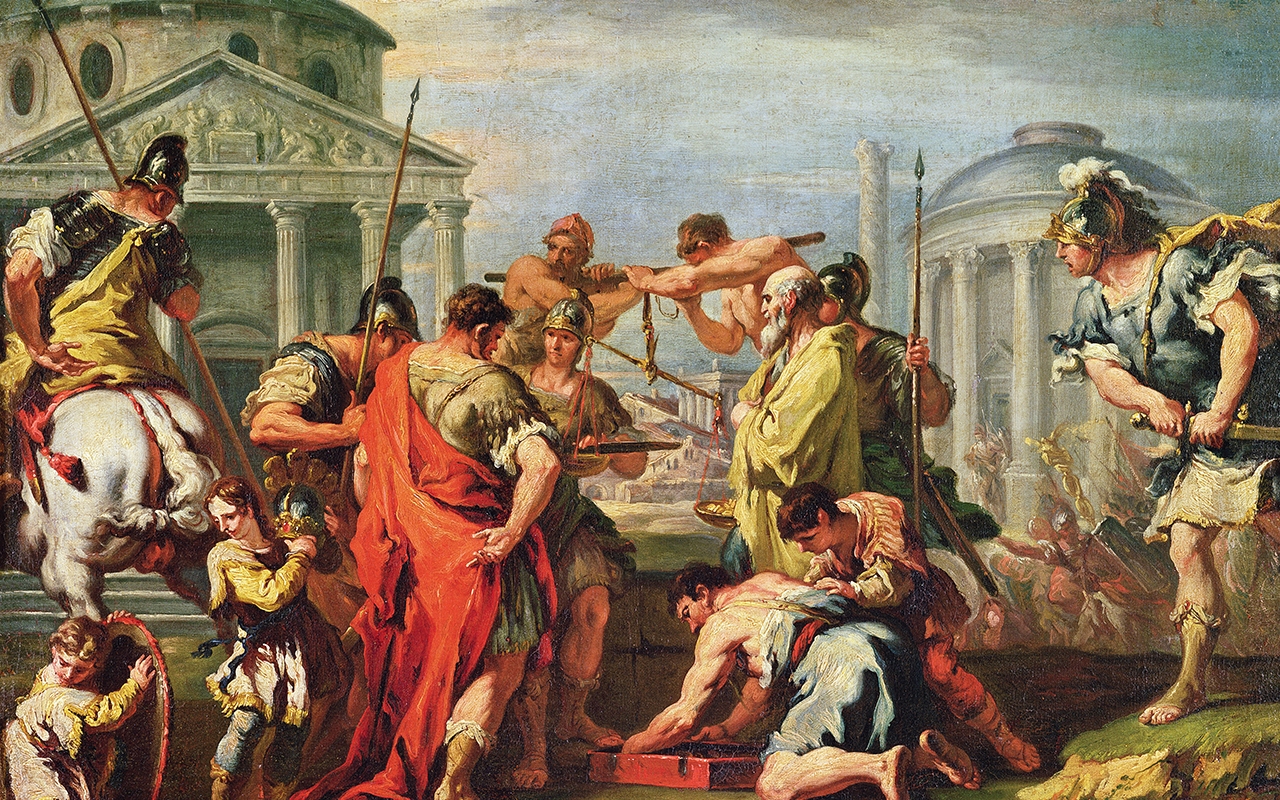 1) It’s Extremely Dangerous To Introduce Violence Into The Political Process:  Tiberius Gracchus was an arrogant Roman Populist who cared little for the niceties of tradition and even less for the opinions of his opponents. He proposed confiscating land from the rich to give to soldiers and poor Romans. This was a terrible policy which helped lead to the fall of the Roman Republic, but unsurprisingly it was quite popular. However, there was quite a bit of resistance to the policy in the Senate and passing legislation of this sort without the approval of the Senate simply wasn’t done in ancient Rome. That is until Tiberius Gracchus found a loophole and did it anyway, earning him the outright hatred of the Senate. Later, a misunderstanding made the members of the Senate believe that their hated enemy was going to overthrow the government and make himself king. They responded to this misunderstanding by surrounding him, ripping the legs off benches and beating him to death. This was the start of a long, violent, slippery slope in Rome as political violence became ever more common. In time, politicians had their own gangs that fought in the street. Senators were knifed on the floor of the Senate and eventually, the leadership of the nation was determined by who could bring the biggest army to Rome. Here in America, we are now starting to see politically-motivated violence. Riots at Berkeley to keep conservatives from speaking. A white supremacist driving his car into the crowd. A Bernie Sanders supporter shooting up a Republican softball game. Protests where the protesters and counter-protesters bring weapons. This goes nowhere good and we would be wise to clamp down hard on this sort of violence before it gets out of hand.

2) When Governance Becomes A Means Of Personal Enrichment First, Good Governance Comes Last:  As the Roman Empire declined, something called the Crisis of the Third Century occurred. For the most part, it followed a pattern like so: the current emperor would be assassinated, usually by his own troops. Then, the strongest governors for the outer provinces of the Roman Empire would marshal their forces and march on Rome. After a bloody struggle, one of them would become the Roman emperor. Unfortunately, while the troops who manned the edges of the empire were fighting in Rome, barbarians would storm across the borders to pillage, loot and rape everything in their path. Soon thereafter, perhaps frustrated by the incompetence that allowed this to occur, some of the soldiers who put the emperor in power would then murder him and the cycle would start again. This led to Rome having something like 20 emperors during a 50 year period as the Empire fell into further disrepair. Thank God that John McCain and Dianne Feinstein don’t have their own personal armies, but are they – and the rest of the members of Congress – really putting the country first anymore? Is good governance a bigger concern than pleasing special interest groups and getting TV time? Do our leaders make anything more than a grandstanding surface attempt to tackle the tough issues that confront America? Are our politicians the best among us? Are they men like Washington, Jefferson and Adams who were determined to make this a better country for future generations or just top-of-the-line con artists smart enough to think bigger than bilking old ladies out of their pension checks? Good governance doesn’t just happen. It takes the right kind of people in office to make it happen and for the most part, those are no longer the sort of men and women we have in charge.

3) If You Stop Doing What Makes You Successful, The Success Won’t Continue Forever:   In the early days of the Roman Republic, the soldiers tended to be the WEALTHIER people in society. That was because they needed a certain amount of money to buy the equipment needed to fight. Back then, being a Roman citizen meant something. No politician dared mistreat a citizen of the empire for fear of retaliation from Rome. For most of the Roman Republic, there was no welfare and people were expected to take care of themselves. The republic was certainly challenged during these years, but it stayed free and strong and it was the driving force of the civilized world. Eventually, things changed for the worse as the Roman elite became more interested in using the government to become rich and powerful instead of using it for the good of the people. Later on, the rich seldom fought unless it was at the head of an army, which was a money-making venture in those days. Roman emperors had citizens put to death solely because they wanted to repossess their lands and money to give to their supporters. Free grain along with extravagant games in the Colosseum were given to the mob, which became increasingly demanding, irrational and violent. As many of the traditions, practices and character traits that made Rome successful disappeared, Rome became weaker. It moved toward decadence, weakness and tyranny. Eventually the Western half of the Empire fell in 476 A.D. If you had to pick a period of Roman history that today’s post-constitutional America is reminiscent of, it would be that last stage of the Roman Republic when freedom was slowly, but surely slipping away from the Romans while corrupt men fought to control the spoils that running the government could bring. Don’t take the freedom we have for granted because we could lose it one day just as easily as the Romans did.

4) When People Can’t Get Justice Under The Law, They Will Go Outside The Law:   Many people have heard of Julius Caesar’s famous decision to “cross the Rubicon” and begin a Roman civil war, but the devil is in the details. You see at this point in Roman history, the Republic was hanging on by a thread. Appearances were largely kept up, but Caesar and his former partner-turned-rival Pompey were the two most powerful men in the country and each feared the other intended to take over. Yet and still, Caesar had not committed to that course of action. So when Caesar returned from Gaul, he made a simple offer. He would be willing to disband his armies before crossing the Rubicon and entering Rome if Pompey did the same thing. Although the Senate voted in favor of this proposal, a number of prominent senators undermined it and encouraged Pompey not to disarm. Had Caesar returned to Rome while his rival had an army at his back, he likely would have been killed. So instead, he crossed the Rubicon with his own troops and that was the beginning of the end for the Roman Republic. As we have become ever more tribal in America, we have started to simply not care about being fair to our political adversaries. The “free press” is hopelessly hostile and biased toward conservatives. The IRS and FBI have been used for political purposes. The EPA has put draconian restrictions on what people can do with their own land. Liberals openly advocate using the court system to implement laws that can’t make it through Congress. The federal government has become ever more powerful and its reach has become ever longer and more restricting. As we saw with Hillary Clinton and with illegal aliens, if you are politically powerful enough or part of a catered-to group, the laws don’t apply to you. This is all extremely dangerous because it undercuts the rule of law, respect for law and the compassionate and fair application of the law.  When people conclude that only outlaws can get justice, people will become outlaws.

5) Immigration Only Works As Long As There Is Assimilation: Like the United States, the Romans were great believers in bringing other people under the banners. Instead of subjugating and enslaving the foreign nations they captured, the Romans usually made them part of their alliance. In some cases they gave them full citizenship, but even a lesser form of citizenship was no small thing given the power of the Romans and how they could have behaved given their strength. This was a big part of why the Romans became so successful. However, as time went on, things began to change. The Romans had at times allowed conquered tribes to enter their territory, but they always split them up so they’d have no choice other than to live surrounded by Romans and learn their ways. As the Empire became more decadent, they allowed tribes of barbarians to move into Roman territory as a group under their old rulers. Under those circumstances, the barbarians kept their old culture. Eventually, the Romans started bringing these foreigners into their military. The Western half of the Roman Empire was especially guilty of this. In time, the foot soldiers in the military were largely German Goths who ironically were primarily needed to fight other German Goths who surged across the borders.  This was problematic for a number of reasons, but just to name one, it sometimes led to Roman cities being besieged and sacked by their own unassimilated German troops. Eventually, the Western half of the Roman Empire fell as the foreign troops decided they’d rather be ruled by a barbarian king named Odoacer. Here in America, not only do we have surging immigration, we no longer encourage immigrants to assimilate to our culture. It has gotten so bad that we’d rather tell people to press 2 for Spanish instead of insisting that they learn English. Immigration has gotten so out-of-control that even suggesting that we should limit immigration or only allowing immigrants who obey our laws to come here is called “racist.” The Romans eventually lost their nation over that sort of attitude and one day, the same thing may happen to us if we’re not careful.