When my friends who love Donald Trump tell me they support him, I understand the reasons they find him attractive as a candidate. He’s a charismatic, politically incorrect outsider who fights and is promising to build a wall while he gets tough on immigration. 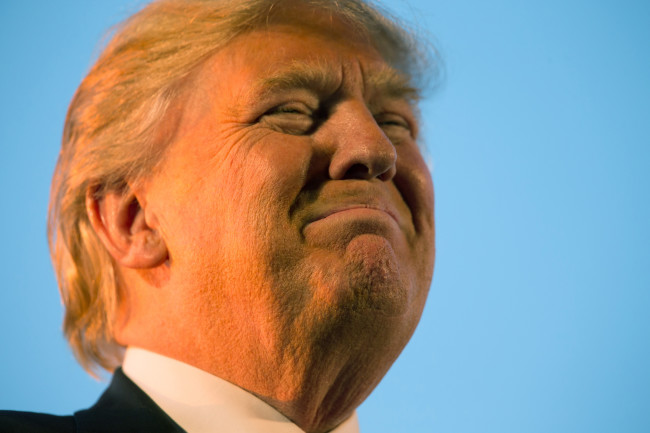 What I don’t get is how so many people can just look at the things they like about Donald Trump, while they mentally block out everything else about him. Setting aside the fact that he’s the least electable Republican we can run unless we can somehow get Dennis Hastert on the ticket at the last minute, he’s also unfit to hold the most powerful position not just in America, but in the free world.

1) He has openly said he’ll force our troops to break the law: When you have a man who publicly says during a debate that he’s going to force our troops to obey his illegal orders to murder civilian women and children, it should disqualify him from the presidency.Do you really trust someone in the White House who has that kind of mentality? Someone who thinks that where our military is concerned, his word should be law no matter what he orders them to do in America or overseas? That’s a dictator’s mentality and as a people who live in a Constitutional Republic, it’s not something we should be willing to tolerate in a President.

2) He’s far too vindictive to be trusted with the powers of the presidency. This is a guy who literally wrote a chapter in one of his books called, “Revenge,” that was all about evening the score with anybody who crosses you. That seemed kind of cute at first, but when you see the deranged way Trump rants about people for months at a time on Twitter for offending him, it’s concerning. The President of the United States has the FBI, CIA, IRS, DOJ and the military at his disposal. The American people need to have a certain level of faith that those agencies will remain neutral instead of being used to settle personal scores. Given his comments about forcing our troops to break the law, it’s impossible to make that assumption when it comes to Trump.

3) He can’t control what he says. The presidency is such an important position that a single comment from the POTUS can sink the stock market, create a diplomatic crisis or even start a war. Think about the problems Obama caused by thoughtlessly commenting on the Trayvon Martin and Henry Louis Gates cases and imagine it being 50 times worse with Trump in the White House. Every few weeks, he creates a new circus with some dumb comment he makes and at this point, it’s apparent that he cannot control himself. If you were trying to come up with who’s most likely to be the first person to start a war between two countries with a tweet, “President Trump” would be a good bet.

4) It’s almost impossible to know where he stands on any issue: Trump is like a used car salesman who’s quitting his job tomorrow and will tell you anything you want to get you to sign on the dotted line. You want a Muslim ban? Trump will provide it. How? No idea. Do you like Planned Parenthood? Good, Trump thinks they do great work. Oh, you hate Planned Parenthood? Well, he’s going to cut off their funding because they’re bad. His signature issue is illegal immigration and yet, three years ago, he had the exact opposite position that he does today. Which position represents how he really feels? Who knows? Trump also says he’s going to erase our $19 trillion dollars in debt in 8 years just by cutting better trade deals, which may be the single most economically illiterate thing I’ve ever heard – and I’ve heard Bernie Sanders talk before. This is a man who lies constantly, switches positions on the issues day to day and has changed political parties 5 times in his life. He’s not a conservative; it wouldn’t shock me if he’s never even read the Constitution before and the only things we can be sure he believes in are promoting himself and making money. Obama at least pretended to be a cypher so people could project their hopes and dreams onto him, but he was always a diehard liberal. As far as we can tell, Trump doesn’t believe in anything but doing what’s best for Trump. That shouldn’t be good enough for anybody on our side: conservative, Christian, Republican, grassroots or establishment.

5) He can’t be trusted with nuclear weapons. Donald Trump is very casual in his attitude about the use of nuclear weapons. He’s refused to rule out using tactical nuclear weapons against ISIS[2].  He made it clear he’s fine with Japan and South Korea going nuclear[3] and his own nutty spox Katrina Pierson said, “What good does it do to have a good nuclear triad if you’re afraid to use it?” When you’re talking about a vindictive and insulting person with poor judgment who doesn’t do apologies and who apparently doesn’t see using nuclear weapons as a big deal, it’s a recipe for a potential nuclear war. There’s not much good you can say about Hillary, but the chances of a nuclear war starting on her watch would be considerably smaller than they would be if we ended up with President Trump.

6) He encourages violence: Everyone across the political spectrum should condemn political violence committed by unions, Occupy goons, the Black Lives Matter idiots AND Donald Trump’s supporters. When Donald Trump talks about how he’d like to punch a protester in the face and publicly, on more than one occasion, has talked about paying the bail of people who assault liberal activists at his rallies, he’s in effect giving a thumb’s up to violent behavior. Couple that with Trump and his henchman Roger Stone’s subtle threats of violence if he loses at the convention and it’s no wonder that you’re seeing assaults at his rallies and regular death threats against people who oppose him. Among many others, Liz Mair[4], Erick Erickson[5], Sierra Marlee[6], Michelle Fields[7], Dana Loesch[8] and Bethany Mandel[9], along with numerous convention delegates[10] have received serious threats. Do we really want to put the Republican seal of approval on this kind of hatred and violence by making Donald Trump the nominee?

Just because Donald Trump’s fans are willing to overlook his flaws, doesn’t mean everybody else can do the same thing. If we sanction and reward this kind of foolishness by making Donald Trump the GOP nominee, then don’t be surprised if the rest of the American people reluctantly put Hillary Clinton in the White House because the idea of “President Trump” is just unthinkable.
Endnotes: