A Golden Nugget Hidden in the Trump Spectacle.

A Golden Nugget Hidden in the Trump Spectacle. 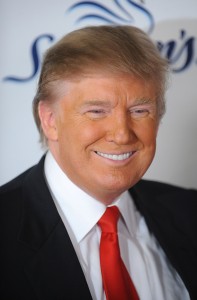 [1]I know. I know. As a veteran political activist, I am suppose to be extremely upset with Donald Trump, out there saying what some on both sides of the political aisle consider to be outrageous things.

But folks, I cannot help myself. It is thrilling to watch someone in the arena of ideas not playing the game according to the dictates of the Left. For far too long, our anti-America enemies on the Left have been allowed to set the rules of engagement. The Left dictates what truths we can say out loud, what words we are permitted to use and what is racist or mean.

Please note. I am neither supporting nor opposing Trump’s comments. I am celebrating Trump’s refreshing unprecedented fearlessness in dealing with the iron-fist out-of-control bullying tactics of the Left/MSM.

I guess it goes back to my childhood living on the mean-streets of Baltimore projects. I detested bullies. They were cowards and mean opportunists. My cousin Jimmy, who loved to fight, taught me the power of a strong military. I was small as a child. When bullies took my lunch money, cousin Jimmy ended the problem. Nothing serious happened, but the bullies knew not to “mess” with Jimmy’s cousin, Peanut (my nickname).

I view the mainstream media and their Leftists partners as the ultimate bullies, whipping Americans into submission, silencing our right to free speech. It sticks in my craw that daring to state an opinion other than the Left’s combined consensus on an issue means your derriere is grass.

It also distresses me that whenever a conservative/Republican says something that the Left chooses to distort and become hysterical about, folks on our side run to microphones to say, “What so-and-so should have said or really meant to say is…” Why surrender to the Left’s distort-and-become-hysterical tactic?

Why kowtow to the Left/MSM, especially when we know they are wrongly interpreting conservatives’ comments on purpose; publishing distortions, exaggerations and lies about what a particular conservative/Republican said?

The Left/MSM allows Democrats to make off-the-cuff outrageous inflammatory statements insulting millions of Americans. Waters – “The tea party can go straight to hell!” Grayson — “Republicans want you to die quickly.” Schultz – “Republicans want to see you dead.” Carson – “The tea party wants blacks hanging on a tree.” Obama about middle America – “Clinging to their Bibles and guns.” Indicting millions, President Carter said an “overwhelming portion” of the opposition to Obama is because “he is a black man.”

Remember the Democrats’ outrageous lying ad showing a Republican pushing an old lady in a wheelchair over a cliff?

Then, there was the absurd shameful irresponsible Democrat ad warning blacks that if they do not vote, they will need to send their kids to school wearing bulletproof vests to protect them from being shot by white police.

Has the MSM demanded that these Democrats apologize/walk back any of their false statements or hate generating ads? No.

Meanwhile, a conservative/Republican has to market test every word that comes out of their mouths, less they suffer the Left’s hysteria/wrath and shoulda-coulda-woulda from fellow conservatives/Republicans. Folks, with the MSM deck so stacked against us, standing up to the Left is extremely challenging. I just wish our side was more forgiving and supportive of our fighters.

Name me one occasion in which a conservative/Republican walking back a statement caused the Left/MSM to forgive him or her. Never. To the Left, an apology is blood in the water, causing a media feeding frenzy to devour a conservative or Republican. Every time one sheepishly apologizes, it is another notch on the Left’s gun barrel; letting the world know they are in charge.

This is what makes Trump’s defiance so remarkable and exhilarating. Thus far Trump has not fallen for the Left’s tactic and become terrorized into walking back his comments. As a matter of fact, Trump routinely doubles down on his original statements. Sorry folks, but I love it. There’s a new sheriff in town. His name is Donald Trump.

Another trick of the Left/MSM is to claim that their hysterical reactions reflect the feelings of a majority of the American people. However, Trump’s addressing illegal immigration shot him to the top of the polls.

Some say Trump is muddying the waters for “serious GOP candidates.” I am not going to argue either way regarding that point. I will say that it is about time someone stood up to these vipers (Leftist media).

A recent incident bears witness to how far PC and Leftist bullying has gotten out of hand; infecting the Democratic party base. Democrat presidential candidate Martin O’Malley was speaking at a Democrat Netroots conference. He was interrupted by protesters screaming about “black lives matter”. The protesters demanded that O’Malley repeat their mantra. Allowing the protesters to hijack the meeting, O’Malley said black lives matter. But when O’Malley added white lives and all lives matter, the audience exploded in outrage, erupting with boos and curse words.

Am I grateful for what Donald Trump has done? You betcha!