Next Monday, the Iowa caucus will take place. At this point, the race looks to be a toss-up between Donald Trump & Ted Cruz. There are polls showing Trump winning handily, but a poll from Who-TV[1] showed Cruz winning by almost seven points yesterday. 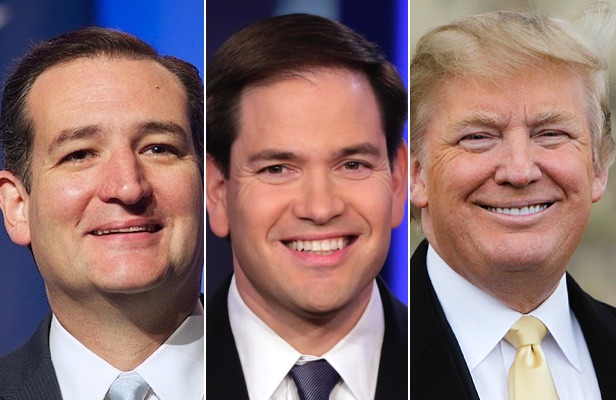 So, how can there be such a a disparity between these polls? It depends on the assumptions that are made.

Donald Trump DOES seem to be pulling a lot of new voters into the race, but he has a mediocre ground game, few small dollar contributions, he’s not running a lot of ads and he hasn’t done a lot of retail politics in the state. That means there’s an open question about how many of these new supporters will actually be translated into votes. This is doubly true because Iowa is a caucus, not a primary. That means it’s much more involved than just showing up at some time during the day and voting.

The polls that project Trump winning are predicting a record turnout, far exceeding anything that has ever happened in Iowa before. If that happens, Trump has an excellent shot to win.

If the turnout is average or even just high, Cruz will probably win because he has a phenomenal, data-driven organization in the state that’s expected to do an excellent job of turning out voters who’ve previously participated in Iowa.

Trump and Cruz will be battling for the top spot and far behind them, Marco Rubio and Ben Carson will be dogfighting for third.

In New Hampshire, Trump appears to be headed toward victory while Cruz, Kasich, Rubio, Bush, Christie and Kasich look to be bunched about around 10%. It’s very hard to say who’ll finish 2nd and third, but if Cruz wins Iowa, he may get just enough of a boost to guarantee his spot in the top 3, even though the state isn’t as conservative.

* If Trump wins Iowa and then, as expected wins New Hampshire, he seems highly likely to also win in South Carolina and Nevada. At that point it may not be possible to stop him because Republican voters love to jump on the bandwagon and say they’re voting for the winner. A lot of people seem to be counting on this race dragging on, which certainly could happen, but Trump already has a lot of momentum and sweeping the early races COULD make him unstoppable.

* If Cruz wins Iowa, it will puncture Trump’s bubble and cement Cruz in as his top challenger. Right now, Trump is ahead in most states while Cruz is in second place. If Cruz wins, he may be able to catch him in more states and may pick up a lot of votes as the primary Trump alternative as other contenders drop out. Theoretically, Cruz doesn’t have to take Iowa to win a long race, but it would certainly help. At this point, Trump could call for nuking Britain and many of his supporters would call it a brilliant move. Losing a state might wake some people to his many, many flaws as a candidate.

* Rubio this year is a bit like Rudy Giuliani in 2012. Everybody keeps claiming he’s about to take off, but it never happens. Rubio seems to be in third place EVERYWHERE, even in his home state of Florida. At least Rudy was in first place in Florida at this point in the race, although his numbers collapsed after he had no early wins.

Rubio has a number of problems that will probably keep him from ever catching on. Not only is the “Establishment lane” crowded (Rubio, Kasich, Christie and Bush are all camped out in it), this is a year when outsiders have been pulling roughly 60% of the vote all year while the “insiders” have been about 25%. It’s also a bit hard to imagine a man who is the poster boy for amnesty and betrayal of his grassroots supporters ending up as the GOP nominee in the year of the outsider. Worse yet, it is not outside the realm of possibility that he will finish in 4th place in Iowa and New Hampshire. Combine that with his lazy campaigning, his poor small dollar donations and the massive amount of negative advertising he has been hit with so far and it wouldn’t be shocking if he were out of the race by South Carolina. Of course, he may solider on all the way to Florida as well, but at this point Rubio looks like a Hail Mary candidate unless Cruz completely collapses. Even then, Trump would probably pick up more Cruz supporters than Rubio. Could Rubio still slog it out, capture most of the establishment vote and win? Absolutely, but again, that assumes the bandwagon effect doesn’t kick in and a large number of people who are anti-amnesty and anti-establishment are going to flock to the banner of a pro-amnesty establishment candidate. That seems like a real stretch at this point, but weirder things have happened.

* The Super PACs supporting Jeb Bush still have plenty of money, but so far they might as well have used the 50 million dollars they spent on toilet paper for all the good it has done Jeb. Additionally, the only candidate who is more likely to lose a general election than Trump is Jeb. Moreover, Jeb is unpopular even with Republicans and seems unlikely to beat either Cruz or Trump in a 1 on 1 race. In other words, the shambling corpse of Jeb’s campaign may continue staggering forward, but there’s no life left in the body. Jeb’s may refuse to accept it, but he’s done.

Both Chris Christie and John Kasich have banked everything on New Hampshire and neither one of them appears likely to win the state. A poor finish for either of them in NH should end the respective campaign and what both of them need are surprisingly high finishes in the state. If one of them finished with a strong second place and the other moderate candidates were to drop out, it could give him the opportunity to consolidate their support. Unfortunately, given the weak finances and organizations of both candidates, neither has much of a chance to capture the nomination.

Ben Carson is a bit unusual in that he’s raising lots of money, has plenty of volunteers and has fantastic favorability ratings, but is only doing so-so in the polls. People love Carson, but they seem to have decided that he’s not ready to be President. For him to get into the thick of things, he needs to beat out Rubio in Iowa, surprise people in South Carolina and hope to pick up a lot of voters from Cruz and Trump as their numbers tank. Carson has the money to continue on for a while no matter how he does, but his campaign needs to show some signs of life or his support will continue to fade.

Rick Santorum, Mike Huckabee, Carly Fiorina and Rand Paul all appear to be out of it already. Whether they drop out after Iowa &/or New Hampshire, they’re unlikely to be big factors.

Summary: Right now, Trump’s obviously in the best position, but it could quickly become a more competitive two man race if Cruz wins Iowa or a runaway victory for Trump if he takes the state. All that being said, the race has been very unpredictable so far and it’s too soon to write anything in stone.