“And no candidate who has led in mid-October with 50 percent or more in the likely voter poll has ever gone on to lose.” – Karl Rove

Karl Rove almost sounds like he thinks: Romney has this election in the bag[2].

“The Obama campaign has pulled down all of its negative advertising. And is now running virtually all positive ads in the battleground states heralding all the success of the last four years. This is very unusual because they have been constantly beating up on Romney. In recent weeks the president’s negatives have risen and Romney particularly after this debate has moved into a lead. You saw it in the Gallup poll you talked about. Six point lead, 51-45. Yesterday it was 50-46. This is the first time that Romney has hit 50 percent in the Gallup likely voter poll and the president has never hit 50 percent in the likely voter poll. And no candidate who has led in mid-October with 50 percent or more in the likely voter poll has ever gone on to lose.”

Before the first debate, Romney either tied with Obama or was a little behind Obama. Since then, the momentum of the race has: shifted in Mitt’s favor and he has been surging[3]. 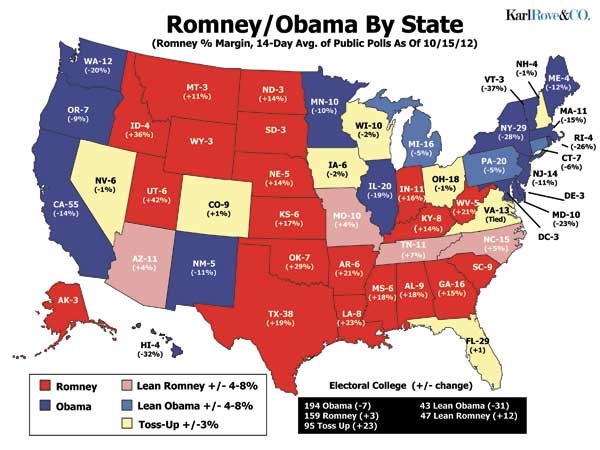 If Romney wins all the states he’s expected to along with the leaners, he gets up to 206 of the 270 votes he needs to win. Additionally, both Florida and Virginia have been swinging hard towards Romney. They’re not quite out of reach for Obama yet, but they seem like they’re moving in that direction. That’s another 42 electoral votes, which gets Mitt up to 248 out of 270 with another 46 electoral votes still in play OH (20), WI (10), IA (6), NV (6), NH (4).

This is not quite as promising as it seems because the enormous amount of negative advertising that Obama has run against Romney in Ohio has driven his negatives up and so, if the election were today, Mitt would probably lose the state. Of course, in 2004, the state didn’t solidify for Bush until the final week; so there’s still time to turn that around.

Additionally, Dick Morris has been arguing that Romney should be working harder to put Michigan (16) and Pennsylvania (20) in play. I agree 100%. His negatives haven’t been driven up in those states and if he starts spending the money, he’d have a decent shot of turning both those states red – and Obama probably needs both to win.

At this point, we don’t have enough data to know who’s going to win, but Romney is getting close to having the electoral votes he needs to win and still seems to have the momentum. That’s not a bad spot to be in with 19 days left until the election.