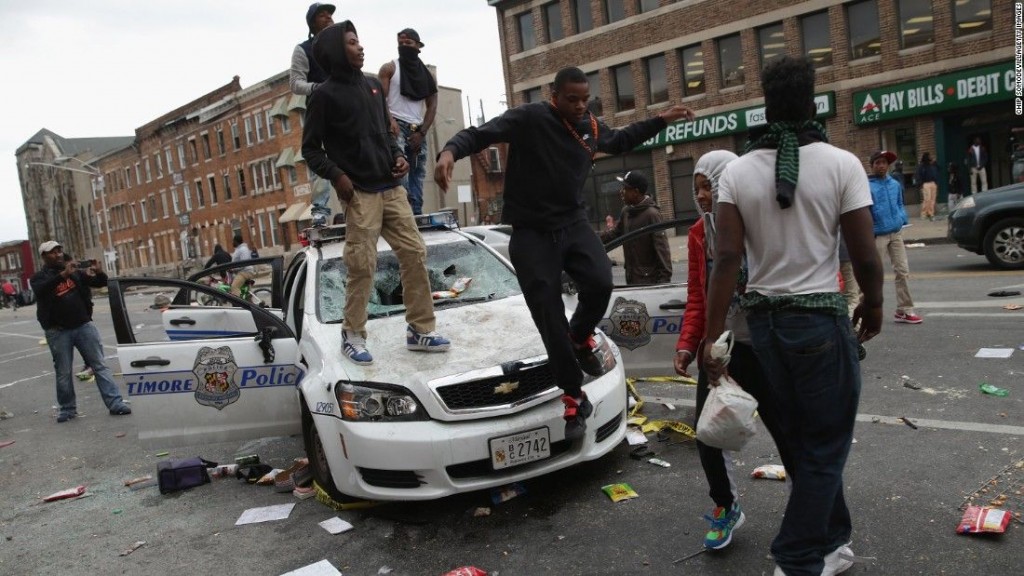 [1]
My brother texted me in Florida reporting from Baltimore, our hometown. He said the thugs have gotten crazy and need to be dealt with. My nephew who is a video journalist said it was appalling witnessing local black ministers arguing over street corners for their group of protesters, jockeying for position for the TV cameras.

A friend called interrupting me watching Bizarre Foods TV show, wanting to know if I was watching the coverage of the Baltimore riots. Upon turning the channel to watch the mainstream media coverage, I had to turn the channel away from it. It was too much to stomach.

I thought, I have seen this stupid evil horror movie before (Ferguson) and I “ain’t gonna” watch it again.

The media is reporting that some black leaders are calling for peace. Well, I am sorry, but that is too little too late. How do you expect black youths to react to the Left’s orchestrated campaign to convince them that white Republicans and conservatives are racist and out to get them; white cops murder them at will, the rich got rich stealing from them and business owners are selfish and evil?

These lies have been sold to black youths by the highest black voices in the country – Obama, Oprah, Democrats, Sharpton, Holder, Jackson, the NAACP, the Congressional Black Caucus and assorted other race exploiting scumbags. If I sound angry it is because I am.

What was that mantra George’s dad on Seinfeld used to keep calm? Oh yeah, he said, “Serenity now! Serenity now!”

Enough with this hogwash that Christians should not get angry. The bad behavior destroying peoples’ livelihood in Baltimore and the nuanced response to it should make decent honorable people angry.

The Baltimore riots and other incidents of black mob attacks and assaults on innocent whites across America are the result of the Left’s hoax that blacks are victimized in America; perpetrating hate for political gain[2]. Such evil should make decent Americans angry.

When Jesus turned over the tables of the crooks in the temple, he was angry. Jesus even called evil doers names, “Ye serpents, ye generation of vipers, how can ye escape the damnation of hell?” Jesus pretty much expressed my thoughts regarding modern day black so-called civil rights leaders.

I am not advocating bad behavior from our side. The Bible says, be angry, but sin not. I am advocating that we stop putting up with it. These thugs do this stuff because they can.

I still can not wrap my head around the mayor of Baltimore saying the thugs must be protected and given space “to destroy[3].”

I am sick of it folks, liberal officials, liberal talking heads and liberal media justifying, tolerating and even celebrating bad behavior.

My brother asked if I noticed that all the blacks heralded as modern day civil rights heroes are criminals? I said, “Great observation grasshopper”, impressed by my low-info-voter brother.

Trayvon Martin was shot while attacking George Zimmerman[4]. I remembered watching a youtube video of Alabama State marching band honoring the thug[5], spelling out “Trayvon” on the field. I thought, you have got to be kidding me.

Equally frustrating is that all the black outrage, anger and violence is based on lies. For example. It has been proven that witnesses lied about Michael Brown after robbing a Ferguson convenience store and assaulting the clerk had his hands up in surrender to police. Brown was shot while attacking a police officer[6]. And yet, from the Grammy Awards to pro football players running out of the tunnel with their hands up, the lie, slander of America’s police and hatred was furthered and nurtured.

Blacks angry because of high black unemployment and poor economic conditions need look no further than their messiah (small m), Obama and his job killing policies and mountain of new outrageous regulations.

So please forgive me folks, my blood pressure can not take getting sucked into watching 24/7 sympathetic media coverage of this latest episode of Blacks Behaving Badly, Baltimore edition.

If the mayor of Baltimore and liberal media are going to take a don’t-make-the-black-kids-angry[7] approach to dealing with white bystanders being brutalized, businesses being destroyed, looting and chaos in the streets, there is nothing I can do about it. Someone said voters get the government they deserve. Baltimore is notorious for electing liberals.

While I pray for my former hometown, I must emotionally sit this one out.