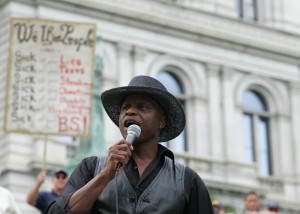 [1]I must admit to experiencing schadenfreude (feeling pleasure from the misfortunes of others) upon learning that Oprah’s movie Selma was snubbed by the Oscars, receiving only two nominations[2].

As a black conservative Tea Party activist, I knew that the movie was simply another propaganda tool for the Democratic Party and America-hating leftists – a part of their ongoing hideous campaign promoting the lie that America sucks and blacks are still victims of an eternally racist country. Sure enough, as I predicted, the usual suspects who produced Selma are being criticized for blatantly rewriting history.

Using my 1970s heyday lingo, I don’t get where Oprah and other liberal mega-rich blacks are coming from. America has been extremely good to these black celebs. Blacks are only 12% of the population. Therefore, Oprah’s and her ilk’s extraordinary prosperity and success are due to enthusiastic white support. And yet these blacks exploit every opportunity to verbally beat up on white America. I don’t get it.

I love my country and realize that I am a black man blessed to be born in the greatest land of opportunity on the planet. Why isn’t Oprah out there praising America and spreading the message that the sky’s the limit? Her life bears irrefutable testimony to this truth.

During an interview, Oprah said, “What I do every day is to allow the truth to speak through me, and to open people’s hearts, and to let them see the great possibility for themselves.” While Oprah’s stated intention sounds wonderful, in that same interview, she says the shooting of Trayvon Martin was the “same thing” as the 1955 murder of 14-year-old Emmett Till. Oprah, your comparison[3] is not the truth.

Trayvon Martin was a thug who was shot while engaging in thuggish behavior. Emmett Till was an innocent kid who was tortured and murdered for flirting with a white woman.

In an interview promoting her Selma, Oprah said, “Even if we didn’t know about a Ferguson, or an Eric Garner or a Michael Brown…they were going on.” She went on to say[4] that the recent deaths of unarmed black men should be a wake-call.

In essence, Oprah is saying that white police murder black men. Brown and Garner lost their lives while breaking the law. As one proclaiming herself to be about “the truth,” once again, Oprah is furthering an extremely irresponsible lie. Dare I cite the recent assassination of NYPD officers Ramos and Liu, in which the gunman called his action retaliation for Brown and Garner?

Awarding Martin, Brown, and Garner civil rights hero status is a slap in the face to Dr. Martin Luther King, Jr. and other Americans who with dignity and honor sacrificed their lives for justice.

While I believe that Oprah is a decent, well-intentioned person, there is a disconnect in her behavior. Why is Oprah, along with other black celebs and black politicians, not acknowledging and addressing real problems that are wreaking havoc in the black community (black-on-black crime, genocidal high numbers of abortions, epidemic school dropouts, incarceration, and out-of-wedlock births)?

Why do Oprah and her black Democrat homeys weaken blacks by blaming whitey, relieving black Americans of personal responsibility? They relentlessly promote failed socialist/progressive liberal big-government programs that have proven to only exacerbate the problems.

Is this the behavior of black power brokers like Oprah, whose goal is “real” black empowerment? Or are these liberal black elitists really social/progressive operatives whose goal is addicting blacks to government dependency, which translates into tyrannical big-government control?

Here is another example of disconnected behavior by liberals who claim to have blacks’ best interest at heart. Stop Patriarchy is a radical pro-abortion group[5] that is on the warpath, attacking black leaders and vowing to protest their pro-life rally to inform blacks that they are aborting themselves into extinction.

Folks, why are these people so angry about blacks telling blacks to stop killing their babies? Stop Patriarchy does not give a rat’s derrière about blacks. Its real agenda is defending the liberal sacred cow of limited population growth at black America’s expense.

Liberals black and white had a cow when former NY mayor Rudy Giuliani dared expose the truth[6] that blacks are killed by other blacks over 90% of the time. Rather than exhibiting genuine compassion for blacks by dealing with this inconvenient truth, Oprah joined the choir of those promoting a vicious, calculated, evil lie designed to place the lives of police officers at greater risk.

Oprah, you said every day you strive to allow the truth to speak through you. Sister, you are failing.