How Can You Feel Good About Yourself If You Vote For Hillary?

My latest Townhall column is called, How Can You Feel Good About Yourself If You Vote For Hillary?[1] Here’s an excerpt from the column. 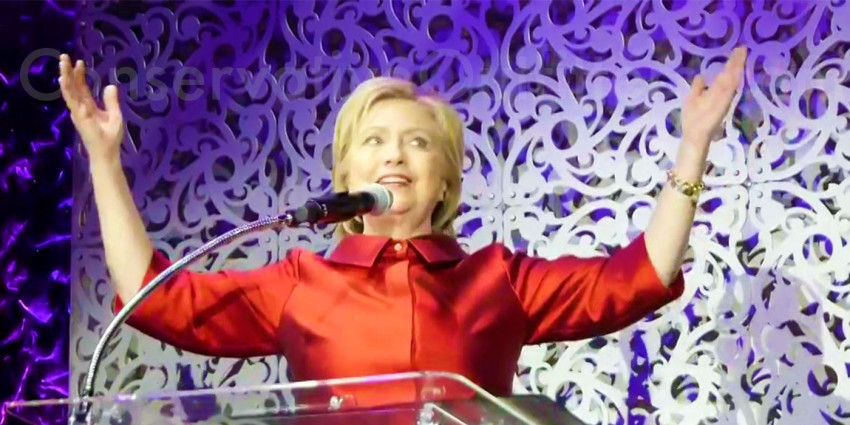 As the Republican Party has gone to war with itself over Donald Trump’s morality and fitness for the presidency to such an extent that it has produced a #nevertrump movement, it’s hard to miss the fact that there is no #neverhillary movement on the Left even though she’s a loathsome figure. Granted, there are plenty of enthusiastic liberals who prefer the authentic, untainted embrace of an open socialist to the scripted foulness of Hillary Clinton, but at the end of the day, almost all of them are okay with her.

Let me ask a question the mainstream media is always happy to ask about Republicans, but never asks about its preferred candidates on the Left:  What does it say about you as a person if you besmirch yourself by voting for Grandma Benghazi?

Here’s a woman who lies so often that her name has practically become synonymous with deception. Unlike her husband, who was such an artful liar that people wanted to believe him when he wasn’t telling the truth, Hillary is ham-fisted about it. She tells obvious lies that everyone from the media to her enemies, to her friends know are lies right from the beginning.

How do you vote for a woman so dishonest that she claims her daughter was jogging around the World Trade Center on 911 or said with a straight face that she landed under sniper fire in Bosnia? When she lies about having her own email server and about putting our national security at risk by having huge numbers of classified emails sent to it, how do you respect yourself when she gets caught lying about it over and over again?

Speaking of that, there are few things less American than allowing someone to get away with breaking the law just because she’s privileged. It’s not even controversial to say that anyone not named “Clinton” who sent more than 2000 classified emails[3] to a private server would lose security clearance and would be going to jail. In fact, even the Obama Administration has already put people in jail for doing less than Hillary Clinton has done[4]. So, how do you look your own children in the eyes when you vote for a woman with an indictment hanging over her head who’s hoping to get off because she’s “above the law?”

Additionally, whatever you want to say about the Republican Party this year, at least we knocked off Jeb Bush. How do you rally behind an even more pathetic Democratic equivalent, a mediocre woman whose entire career has been based on a loveless, dysfunctional marriage to a serial adulterer?

That should be her campaign slogan: “Vote For Hillary: She Married The Right Man!”

That would be a much better slogan than “Hillary For America.” Other than Barack Obama, there’s no one that half of America would rather see in the White House less than Hillary Clinton.  When you choose someone who has been despised by half the country for as long as Hillary has as your candidate, you’re saying “Screw you and drop dead” to everyone who doesn’t vote for your candidate. That’s doubly true since it goes without saying that there can be nothing but open political warfare between the GOP and a woman who has publicly declared that “Republicans” are her enemies. If you think our government is dysfunctional now, you haven’t seen anything compared to what it will look like if Hillary becomes President.

Yet, you’re supposed to stomach the nausea-inducting cocktail that is Hillary Clinton just because she’s a woman.

She lies all the time! But, she’s a woman! She belongs in jail after what she did with her email server. It’s a woman’s turn! She was a mediocre senator and people died in Benghazi because she ignored hundreds of security warnings? I guess some people just don’t like women!

It’s disgusting and ironic that a woman who worked overtime to protect a sexual predator like her husband from the consequences of his actions now wants to play the “girl power” card as the central theme of her campaign, but she has long since abandoned human decency in her all-consuming quest for power. But, what do you say about the people who are willing to potentially play along with this disgusting charade for the next eight years? The people who are just fine with pinning every failure, every lie and every inevitable disaster caused by Hilllary Clinton on sexism? If you at least feel a little bit of shame when you pull the lever for Hillary, then congratulations, you still have a heart.