Non-Americans can’t legally donate to an American presidential campaign. In fact, there’s a system put in place to prevent it. So, how can Barack Obama’s campaign soak in the donations from all of his foreign fans? By disabling the system intended to prevent fraud – and that’s what it’s done. Just like it did in 2008.

That’s why Erick Erickson from Redstate could do: something like this[1]: and have the Obama campaign ready to accept it. 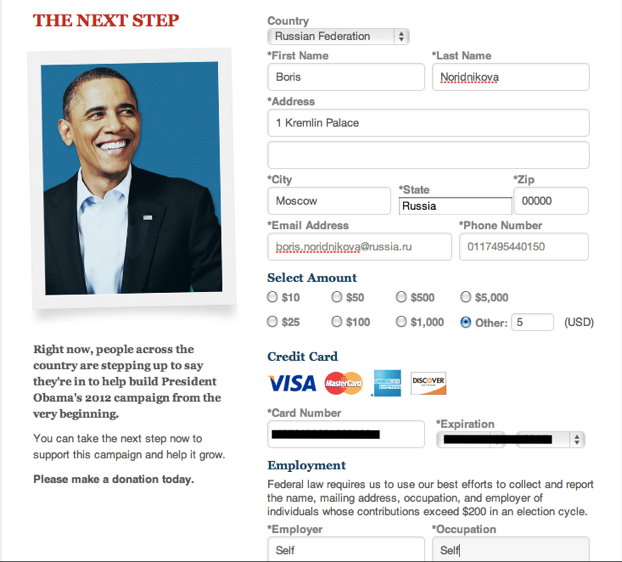 Ace of Spades HQ notices: the Obama campaign actually has more fraud prevention measures in place on its merchandise than it does for campaign donations[3].

What was odd was that there was verification for Obama’s web store, but not to donate. Meaning, you had to verify your address if you wanted to buy a “Dogs for Obama” button, but not if you wanted to donate to his campaign. Most of us remember these types of shenanigans from Obama’s 2008 campaign.

…This makes it all the more surprising that the Obama campaign does not use a standard security tool, the card verification value (CVV) system–the three- or four-digit number often imprinted on the back of a credit card, whose purpose is to verify that the person executing the purchase (or, in this case, donation) physically possesses the card. The Romney campaign, by contrast, does use the CVV–as has almost every other candidate who has run for president in recent years, from Hillary Clinton in 2008 to Ron Paul this year. (The Obama campaign says it doesn’t use the CVV because it can be an inhibiting factor for some small donors.)

What? This is what liberals always claim, including with voter fraud – that very basic efforts to determine valid votes or, here, valid donations, will “frighten” law-abiding citizens.

Why are law-abiding citizens afraid of a CCV check that is common in their lives? Did they never order a Domino’s pizza?

Interestingly, the Obama campaign’s online store requires the CVV to purchase items like hats or hoodies (the campaign points out that its merchandise vendor requires the tool).
Yes— that’s to prevent fraud. They don’t want to send out merchandise and then have someone demand a refund due to his credit card being fraudulently used.

Obama has no problem with this scenario as far as donations, though!

The whole purpose of this is to draw in illegal donations. That’s an illegal attempt to influence an election and quite frankly, people in the Obama campaign deserve to do jail time for this.