Cruz Control Should Be Standard On GOP Models

If I could briefly interrupt the Republican firing squad aiming at Ted Cruz, let’s talk about something we all agree on. And by “we all,” I mean a majority of the American people, the Teamsters, many Democrats and every single last Republican. 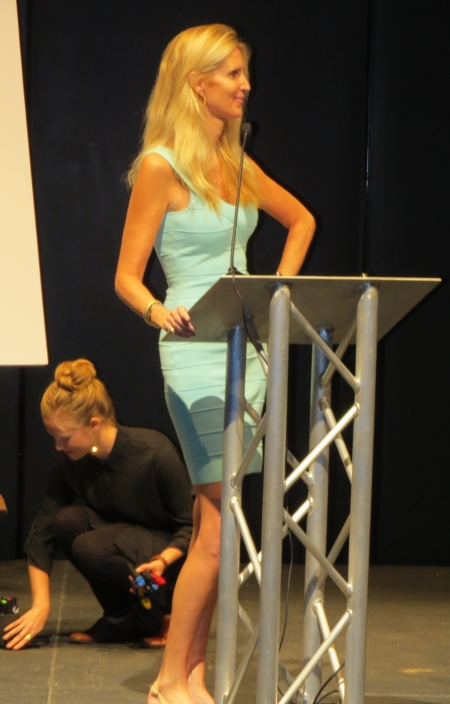 Coulter steps to the podium

Obamacare is an unmitigated disaster.

It was passed illegally without the House ever voting on the Senate bill and became law absent a single Republican vote — even “the girls from Maine” and “the girl from Arizona” — the only major legislation ever enacted on a strict party-line vote. The Supreme Court had to violate the Constitution’s separation of powers to uphold Obamacare as a “tax” — despite the fact that no elected body could ever have enacted such a massive tax hike even with the sleazy parliamentary tricks used to pass this bill.

Proving that everyone hates it, Congress has now exempted itself from Obamacare’s provisions, having asked for, and received, a waiver from President Obama.

Yes, these are the exact same politicians who lecture us that Obamacare is “the law of the land!” (So are our immigration laws.) The same ones who huffily announce that the Supreme Court upheld it! (The court also upheld the First Amendment in Citizens United, but that doesn’t stop Obama from demanding Congress overturn the First Amendment.) They are the same sanctimonious frauds who tell us that Obamacare is “the right thing to do!”

Those guys waived Obamacare for themselves. If national health care is so great, why don’t they want it?

In every single category of Crap Forced On the Country by the Left, liberals always have a work-around for themselves.

They love the public schools and denounce school choice — but their kids go to St. Albans or Sidwell Friends. As Al Gore responded to a question from a black journalist for Time magazine who asked him why he opposed school vouchers while sending his own kids to private schools, “My children — you can leave them out of this!”

Liberals are always eager to release criminals and block crucial crime-fighting strategies such as stop-and-frisk — which they announce from the safety of their antiseptic, crime-free neighborhoods. They love the homeless, but try putting a homeless shelter in their doorman buildings.

They tell us guns won’t protect us — and then we find out the loudest of them all have armed guards. Staunch gun-control advocate Mayor Richard Daley of Chicago had three armed guards with him at all times, as well as an armored car. Mayor Rahm Emanuel also has armed guards and an armored car. Chicago aldermen are allowed to carry any guns they like. But until very recently (we hope!) the people of Chicago were virtually prohibited from being armed.

Are you beginning to see the pattern?

Liberals love affirmative action — provided their offspring still get into Harvard, Yale or Princeton. How about they give up their kids’ seats to disadvantaged minorities?

Class warriors Warren Buffett and the Nation magazine’s Katrina vanden Heuvel hired phalanxes of lawyers to fight the IRS when informed they weren’t paying the government what they owed. George Soros and the Kennedy family stash their money in offshore accounts, safe from U.S. taxation.

Liberals also strongly support every manner of environmental regulation — unless it blocks the view from the Kennedy compound. In deference to Teddy Kennedy’s ferocious opposition to wind farms off the coast of Cape Cod, the federal government reduced the number of turbines, moved them farther off the coast and ordered them painted white to blend in with the view.

And now these government do-gooders shoving Obamacare down our throats have managed to exempt themselves from its wonderful provisions. Supreme Court justices won’t have to suffer under Obamacare, but will continue to have their health care subsidized by us, the hapless taxpayers forced into this rotten system.

Unfortunately, most Republicans are too stupid to notice that Democrats are walking around with a gigantic glass jaw. Democrats must not be able to believe their dumb luck.: Instead of hitting our glass jaw, Republicans have decided to attack Ted Cruz!

Cruz, and his Senate colleague Mike Lee (who, for some reason, is being held harmless by both Democrats and Republicans), have demanded that the Senate vote on the House bill fully funding the entire government — except Obamacare. Most important, they want Democrats to allow more than one amendment to that bill.

The Democrats are refusing either of those options in the Senate.

Among the amendments Republicans might want to introduce is one requiring members of Congress and their staffs to live under Obamacare. Or an amendment delaying the law’s implementation for the whole country — and not just the big employers favored by Obama. And also an amendment taking the administration of Obamacare out of the hands of the utterly corrupt IRS.

Can we at least get Senate Democrats to vote on these urgent reforms? I’d especially like to see the votes of red state Democrats, such as Mary Landrieu, Mark Begich and Mark Pryor. I bet their Republican opponents in the midterm elections next year would, too.

Of course, for Cruz’s threat to work, it has to be credible. Too bad Republicans have been blanketing the airwaves proclaiming that: (1) They don’t have the votes to defund Obamacare; and (2) Republicans will get blamed in the event of any government shutdown.

Republicans: You never had to shut the government down! (And thanks for making it blindingly clear that you never intended to.) You could have waited to see how the public opinion was going and cried uncle at the last minute.

But instead of attacking Obamacare and the breathtaking hypocrisy of the Democrats over this massively unpopular law, far too many Republicans have been spending their time attacking Ted Cruz. (Why didn’t we see one-tenth as much venom directed at Sen. Marco Rubio for trying to give the Democrats 30 million new voters with amnesty as we have toward Cruz for trying to defund Obamacare?)

For every minute you spend attacking Cruz on TV, Republicans, could you consider spending two minutes attacking Obamacare?

Barry Goldwater didn’t “have the votes” when Ronald Reagan launched the conservative movement with his “A Time for Choosing” speech in 1964. But he galvanized conservatives and gave them the hope of future victories. Does Rep. Peter King think Reagan was a fraud who lost influence in the Republican Party with that speech?: We don’t have the votes, Ron!

Whether or not Cruz succeeds, we wouldn’t be talking about Obamacare this week without his efforts to defund it — at least those of us who: are: talking about this disastrous law, rather than attacking Cruz.