Democrats To America: We Own The Government!

In the current fight over the government shutdown, Republicans are simply representing the views of the American people. 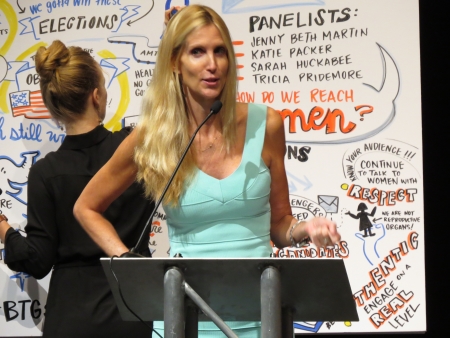 Ann Coulter speaks with the artist draws behind her.

Americans didn’t ask for Obamacare, they don’t want it, but now their insurance premiums are going through the roof, their doctors aren’t accepting it, and their employers are moving them into part-time work — or firing them — to avoid the law’s mandates.

Also, the president did raise taxes on the middle class in defiance of his well-worn campaign promise not to. Indeed, Obamacare is the largest tax hike in U.S. history.

Among the other changes effected by this law are:

— Obamacare will allow insurers to charge 50 percent higher premiums for smokers, but prohibits insurers from increasing premiums for those with HIV/AIDS.

— No doctors who went to an American medical school will be accepting Obamacare.

— Merely to be eligible for millions of dollars in grants from the federal government under Obamacare, education and training programs are required to meet racial, ethnic, gender, linguistic and sexual orientation quotas. That’s going to make health care MUCH better!

— Obamacare is turning America into a part-time nation. According to a recent report by economist John Lott, 97 percent of all jobs added to the economy so far this year have been part-time jobs. Ninety-seven percent!

— Obamacare is such a disaster that the people who wrote it refuse to live under it themselves. That’s right, Congress won a waiver from Obamacare.

Responding to the people’s will, House Republicans first voted to fund all of government — except Obamacare. Obama refused to negotiate and Senate Democrats refused to pass it.

Then the Republicans voted to fully fund the government, but merely delay the implementation of Obamacare for one year. Obama refused to negotiate and Senate Democrats refused to pass it.

Finally, the Republicans voted to fully fund the government, but added a requirement that everyone live under Obamacare. No more special waivers for Congress and their staff, and no waivers for big business without the same waivers for individuals.

Obama refused to negotiate and Senate Democrats refused to pass it. So as you can see, Republicans are the big holdup here.

A longtime Democratic operative, Karen Finney, explained the Democrats’ intransigence on MSNBC to a delighted Joan Walsh (aka the most easily fooled person on TV) by comparing House Republicans to a teenager trying to borrow his mother’s car. “No, I’m not negotiating!” Mother says. “It’s MY CAR!”

This wasn’t a stupid slip of the tongue that other Democrats quickly rejected. Finney had used the exact same metaphor to a panel of highly agreeable MSNBC guests the day before. (MSNBC books no other kind of guest.)

The left thinks the government is their car and the people’s representatives are obstreperous teenagers trying to borrow the government. Which belongs to Democrats.

That’s not how the Constitution views the House of Representatives. To the contrary, the House is considered most reflective of the people’s will because its members are elected every two years.

As a matter of fact, the Republicans who mistakenly assume they have something to do with running the government represent most of the people who pay taxes to run it. So it’s more like a teenager who is making the car payments, maintaining the car insurance and taking responsibility for registering the car being told: “It’s not your car.”

But the Democrats refuse to even negotiate. It’s their government –: and if you Republicans think you’re going out dressed like that, you’ve got another thing coming!: Needless to say, they absolutely will not consider the Republicans’ demand that Democrats merely live under Obamacare themselves.

Instead, Democrats say “the Koch brothers” are behind the effort to defund Obamacare.

The MSNBC crowd calls Republicans “arsonists” every 15 minutes. They ought to check with fellow MSNBC host Al Sharpton. He knows his arsonists! In 1995, Sharpton whipped up a mob outside the Jewish-owned Freddy’s Fashion Mart with an anti-Semitic speech. Sometime later, a member of the mob torched the store, killing seven Hispanic employees.

Every single Democrat in the country uses the exact same talking point: We “refuse to negotiate with a gun being held to our head.”

Which means the Democrats will not negotiate at all — not now, not ever. House Republicans have already passed three-dozen bills defunding, or otherwise modifying, Obamacare. Senate Democrats and liberal commentators had a good laugh at Republicans for passing them.

If you are in the minority of Americans not already unalterably opposed to Obamacare, keep in mind that: the only reason the government is shut down right now is that Democrats refuse to fund the government if they are required to live under Obamacare.