If Donald Trump Is the Nominee, Hillary Clinton Has Already Won in November

Donald Trump can win if the #nevertrump people….no, he can’t.

Well, what if Donald Trump were to….it doesn’t matter. 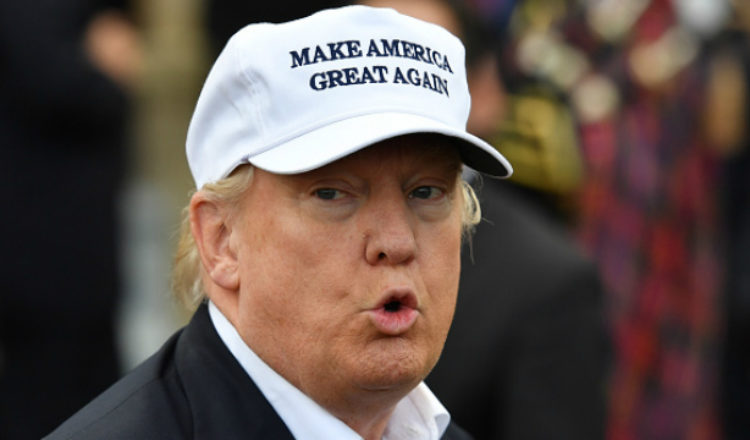 Barring a zombie apocalypse, alien invasion or Hillary being indicted for her crimes by the Obama-run DOJ (which is about as likely as the first two), Donald Trump is not going to be the next president. Even if Hillary’s horrible cough turns out to be a symptom of some fatal disease, Trump still won’t be elected because whoever her vice president turns out to be will still beat him.

This is not an attempt to rehash the merits of Donald Trump vs. any of the other candidates. The primaries are over and Trump won.

However, people who say that Trump has a significant chance to win have NO IDEA what they’re talking about. They’re winging it, BSing you, engaging in wish fulfillment or just telling you what you want to hear.

This is not rocket science and you don’t have to be a political genius to figure it out.Via National Review: [2]

In the latest ABC News poll, Trump’s unfavorable ratings among all Americans have hit 70 percent; and 77 percent of women view him unfavorably. His favorable rating among his base of white men is 46 percent, down from 54 percent in last month’s ABC News poll. Only 47 percent of self-identified conservatives view him favorably, down from 58 percent in May.

Contrary to what some people like to say, when you have two candidates as widely known as Donald Trump and Hillary Clinton, the polling DOES MATTER this far out. Trump has been consistently losing in that polling[3].

Some people take heart in the fact that while Trump’s still losing when the swing states are polled, he’s losing by a smaller margin. What they’ve failed to account for is that he is so incredibly unpopular that he puts a number of “gimmie” states for the GOP into play for the Democrats including Georgia, Missouri, Arizona, Utah and, yes, even Texas.

What’s worse is that Ted Cruz dropped out May 3rd which effectively cleared the way for Donald Trump to focus on the general election. That’s an eternity in a presidential campaign, but what has Donald Trump done with his time?

Has he made any kind of significant effort to win over the Republicans who are skeptical about him? No. Has he done anything of significance to reach out to new demographics beyond his current base of supporters? No. Has he started building any kind of professional data operation that’s a necessity for campaigns these days? No. Has he cleaned up his act, stopped making gaffes and shown that he can be more presidential? No.

Additionally, although Trump certainly does have a few quality people working for him, his campaign staff is laughable. The best people on the GOP side won’t work with him because they’re afraid of having their reputations tarnished and most of the staffers that are on his team are amateurs who wouldn’t be hired by any other GOP campaign at this level. On top of that, Hillary Clinton has more people working for her in Ohio than Trump does on his whole campaign. There’s something to be said for running lean and mean, but given the poor quality of Trump’s rapid response team and some of the clownish press releases he puts out, his staff either lacks talent, is overwhelmed or simply isn’t being allowed to do their jobs. Maybe it’s all of those problems combined.Believe it or not, Trump’s fundraising is even worse. Maybe that shouldn’t be a surprise since he spent months telling everyone that he is so rich he doesn’t need anyone else’s money and was waving off Super PACS only to start begging for money just like everybody else once the primary was over, but it’s a huge problem. Hillary Clinton and the Super PACS supporting her are probably going to spend somewhere between 1-2 billion (that’s billion with a b) dollars on this campaign. Meanwhile Trump started this month with 1.3 million dollars[4] in cash on hand. Does anyone see Donald Trump being disciplined enough to spend hours every day on the phone convincing rich donors to pony up cash and attend lots of private, off-the-record fundraisers?
No way.

Trump recognizes this, too, which is why he’s floated the idea of funding his own campaign….which is also a bad joke.

The fact that Donald Trump thinks that is enough to adequately fund a campaign shows he’s completely delusional and it could lead to the GOP being outspent by Clinton more than 10-to-1. Money isn’t everything in politics, but a candidate that has that kind of cash advantage will win 999 times out of 1,000.

Unbelievably, normally sensible people look at all this and think, “Sure, Trump has a lot of disadvantages, but nobody thought he’d win the primaries; so he’ll be fine.” What sort of “thinking” is this? In the NCAA Tournament, if a 15 seed pulls an upset, you don’t then pick it to win the whole tournament because no one expected it to win the first game. At this point, Trump’s in even worse shape than Republicans were in Missouri after Todd Akin’s “legitimate rape comments” not just because Trump is MORE UNPOPULAR than a politician whose name is synonymous with unlikability, but because that state is a more friendly playing field for the GOP than the country overall.

Well, there has been talk of a delegate revolt at the convention. Unfortunately, even if that were to happen and Trump were replaced with a more electable candidate (pretty much anyone with a pulse whose last name isn’t Bush), a block of people would refuse to vote in protest because Trump did win fair and square. Maybe those people would be hypocritical because they’re mostly the same ones who’ve been saying, “Anyone who doesn’t support Trump is backing Hillary,” but it’s reality. Additionally, even though Trump would probably be secretly relieved that he’s not going to go down in history as a historic loser, he’d be likely to do everything he could to undermine the GOP nominee and put “Crooked Hillary” in the White House out of revenge.

Could the GOP win if Trump just decided not to run? Absolutely. If Trump were replaced with almost anybody other than Jeb Bush, Hillary would go from being practically guaranteed to lose to a big underdog. Would Trump do that? It’s highly unlikely because it would require him to do what’s best for the country instead of parlaying this into a massive branding effort to benefit himself. That doesn’t seem to be in his character. It would be fantastic to be wrong about that, but unless Trump decides that he benefits personally from not running, it’s hard to see him stepping aside. Barring that, the only other thing people who care about their country can do is try to help candidates down ticket so we can limit the tremendous losses we’ll take with Trump at the top of the ticket.

Donald Trump is a dog who finally caught the bumper of a car and he has no idea what to do next. Sadly, the rest of the country is getting dragged along with him and it’s going to mean that Hillary Clinton will be our next president.