As recently as 1956, nearly 39 percent of blacks voted Republican in that year’s presidential election. After the Civil War, Abe Lincoln’s Republican Party easily carried the black vote — where blacks were allowed to vote. Unwelcome in the Democratic Party, most blacks voted Republican and continued to do so through the early part of the 20th century. It wasn’t until 1948, when 77 percent of the black vote went to Harry Truman, who had desegregated the military, that a majority of blacks identified themselves as Democrats.

Yet, as a percentage of the party, more Republicans voted for the passage of the Civil Rights Act of 1964 than did Democrats. For his key role breaking the Democrats’ filibuster and getting the act to pass the stalled Senate, Republican Sen. Everett Dirksen, a conservative from Illinois, landed on the cover of Time magazine. President Lyndon Johnson called Dirksen “the hero of the nation.” The Chicago Defender, then the country’s largest black daily newspaper, applauded Dirksen’s “generalship” for helping to successfully push through the bill. 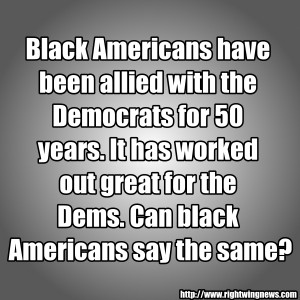 Older black voters sometimes explain they’re opposed to Republicans because of the “racist” Southern strategy. But Richard Nixon speechwriter Pat Buchannan, credited with inventing the “Southern strategy,” considered the Democratic Party the party of the racists. Buchanan said: “We would build our Republican Party on a foundation of states’ rights, human rights, small government and a strong national defense, and leave it to the ‘party of [Democratic Georgia Gov. Lester] Maddox, [1966 Democratic challenger against Spiro Agnew for Maryland governor George] Mahoney and [Democratic Alabama Gov. George] Wallace to squeeze the last ounces of political juice out of the rotting fruit of racial injustice.'”

But before that, another pivotal event occurred that helped the GOP-as-racist meme. In 1960, during the presidential campaign, Martin Luther King Jr. was arrested following a sit-in at a segregated lunch counter in Atlanta. Hundreds of other protestors were released, but King was jailed on a trumped-up probation violation for failing to have a Georgia driver’s license.

King’s aides reached out to then-Vice President and Republican presidential candidate Richard Nixon. They also reached out to the Democratic nominee, John F. Kennedy. Bobby Kennedy called the Atlanta judge handling the case. Shortly after that call, the judge released King. Nixon, according to Harry Belafonte, a King supporter, “did nothing.” Is that true?

Nixon, it turns out, had a much closer relationship with King than did Kennedy. In the Nixon Presidential Library in Yorba Linda, Calif., records show considerable handwritten notes and correspondence between Nixon and King. This includes a 1957 letter from King acknowledging their previous meetings, which thanked Nixon for his “assiduous labor and dauntless courage in seeking to make the Civil Rights Bill a reality,” and praised him for his “devotion to the highest mandates of the moral law.”

But in 1960, on the eve of the election, Nixon was in a tough spot. Nixon’s public silence might be misconstrued as acceptance of King’s arrest. On the other hand, as a candidate for his boss’s job, Nixon worried about the political costs of appearing ungrateful if he chastised President Dwight Eisenhower for not taking stronger action. Eisenhower, however, was content to let the Justice Department handle the matter.

According to historian and presidential biographer Stephen Ambrose, while Nixon made no public comments, he telephoned Attorney General William Rogers to find out if King’s constitutional rights were being infringed, thus opening the door for federal involvement. Nixon, a lawyer, was concerned about the ethics of calling a judge to get him to release someone.

Nixon, writes Ambrose, told his press secretary: “I think Dr. King is getting a bum rap. But despite my strong feelings in this respect, it would be completely improper for me or any other lawyer to call the judge. And Robert Kennedy should have known better than to do so.” That Bobby Kennedy, also a lawyer, nevertheless made a phone call to the judge did not alter the issue of whether it was appropriate. In retrospect, an easy call, but not at the time.

Two million pamphlets titled, “‘No Comment’ Nixon Versus a Candidate With a Heart, Senator Kennedy,” were distributed in black churches. Never mind that in 1956 Nixon revealed he was an honorary member of the NAACP. Or that Nixon pushed for passage of the ’57 civil rights bill in the Senate. Or that Time magazine wrote that Nixon’s support for civil rights incurred the wrath of one of his segregationist opponents, Sen. Richard Russell, D-Ga., who sarcastically called Nixon the NAACP’s “most distinguished member.”

But the GOP-is-racist meme can be heard nightly on MSNB-Hee Haw and in political science and history classes all over the country. Actor Morgan Freeman calls the tea party racist. Democratic National Committee Chair Rep. Debbie Wasserman Schultz, D-Fla., tells us that the GOP wants to “literally drag us all the way back to Jim Crow laws.”

Keeping blacks ignorant of history remains crucial to this caricature of the Republican Party — and to the monolithic Democratic black vote. Not so black and white, is it?

Larry Elder is a best-selling author and radio talk-show host. To find out more about Larry Elder, or become an “Elderado,” visit: www.LarryElder.com[2].