No country would allow their citizens to live under a constant barrage of missile attacks and bombs and danger — and the State of Israel will not allow Arab terror to continue.: : The people of Israel — from Tel Aviv to Jerusalem are united that Israel must stop these attacks and act in self-defense against the Palestinian Arab terrorists.

The terrorists in the Mideast are the enemy of the entire West, and it’s time that Israel takes action.: : Peace is something everyone wants — but stopping the enemy so all people can have peace is necessary. 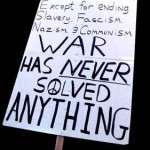 Some quotes which speak to these unique times:

The time is now to wipe out the terrorists, and to protect innocent people. Humanity has no choice but to destroy evil, whatever it takes. It is no longer a dream, but a necessity. The Arabs don’t desire so called “occupied territories”— it’s about a desire to eradicate the Jewish people.

Decent, peace-seeking people everywhere will stand with the State of Israel and decency.

Ronn Torossian[2]: is a: Public Relations[3]: executive, philanthropist and author.