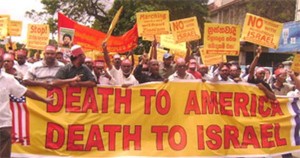 [1]Josh, in Israel, emailed me. He said they are“living under the specter of the Iran deal and see where this is all heading.” They are extremely concerned. Josh said, “For starters what even gave him the right to lead such “negotiations” on behalf of the world? Who anointed him king, anyway?” Josh concluded, “Either Obama’s deal is insane or deliberate[2].”

Well Josh, the US mainstream media has for all intensive purposes made Obama king. Concerned Americans say we are resembling a banana republic (dishonest government ignoring laws). The MSM aggressively promotes whatever Obama wants the public to know and blocks was he does not.

For example: Everyone knows about the shooting of Cecil the lion. Due to a MSM insidious blackout of the story, 70% of Americans do not know about the real-life horror movie happening behind the walls of Planned Parenthood. The vile scumbags at PP are illegally black marketing baby body parts (mostly black). Cause for PP staff to high-five and celebrate is when they score an intact dead baby[3] because the profit is higher.

Think about that folks. The MSM has made sure the masses know nothing about Obama and Democrats supporting and covering up the PP illegal baby body parts chop shop scandal. And yet, everyone knows about the death of a lion.

The MSM also makes sure (king) Obama can lie with impunity. In my youth, I naively thought public officials cannot lie because we have video. If Obama lies to America and the MSM refuses to call him on it, does it make a sound?

Yo Morgan, I need you and that Black dude (Jack Black) to sell my nuke deal to my peeps. Whenever Obama wants to scam blacks his language becomes more urban. Black actor Morgan Freeman and other Hollywood liberals produced a video, “#Iran Deal is Awesome!” – to sell Obama’s nightmarish deal. The lie-filled video is an outrageous insult to Americans’ intelligence[4].

Clearly, Obama knows the MSM will help sell his lies. The Iran ego-driven irresponsible nuke deal is Obama urinating on America and Israel’s head while his minions tell us his golden nectar is divine rain that will ultimately produce beautiful flowers of peace. Frustratingly, black race loyalists, white guilt ridden Obama sycophants and Leftists will sigh and say, “Isn’t he wonderful?”

My announcer will tell you how Obama’s deal screws everyone.

Thanks Lloyd, and hereeee’s what Iran gets – over one hundred billion dollars to further its role as the world’s greatest exporters of terrorism. That’s right folks. The US will be funding terrorism[5], against itself.

The guy Obama made the deal with, Ayatollah Khamenei, along with Iranian hardliners chant, “Death to America!” Ayatollah Khamenei’s new book, “Palestine” instructs how to outsmart the US and destroy Israel[6]. Obama says chill-out[7], Khamenei does not mean it.

Obama says inspectors will have 24/7 access to Iran’s nuclear facilities to insure they are not making a bomb. Not true[8]. The deal says inspectors must give Iran 24 days notice which Iran can stretch even longer[9]. Do I really need to elaborate on the absurdity of this Obama concession?

Israeli Prime Minister Benjamin Netanyahu said Obama’s nuke deal will spark a middle east nuclear arms race[10]. Well duh! If the neighborhood bully gets a gun, doesn’t self-preservation dictate that neighbors rush to acquire guns to defend themselves from the bully? Is Obama that stupid or is he, as Josh suggested, “deliberately” endangering Israel?

But wait folks, there’s more. Everyone on the planet knows Iran will break the deal and immediately pursue a nuclear bomb. In 2013, Obama backed Israel’s right to use force to stop them. Unbelievably, Obama’s Iran nuke deal requires the US to defend Iran against Israel[11]. Can you imagine the US actually fighting our ally to protect terrorism? How satanic is that?

Regarding Israel (Genesis 12:3): “And I will bless them that bless thee, and curse him that curseth thee.” – God

And now, back to you, Lloyd!

To my fellow black Christians who are going along with Obama’s evil deal, you should be ashamed of yourselves; choosing skin-color loyalty over God’s chosen people.

The Bible says, “Before I formed thee in thy mother’s womb, I knew thee…” To provide intact dead babies for its clients, PP abortion doctors deliver the entire baby except for the head (partial birth abortion). Then, the doctor inserts scissors into the base of the baby’s skull[12] and forces the scissors up into its brain to kill the baby. Whether you are a Bible believer or not, your gut tells you this is evil. This fall, congress will vote whether or not to continue giving PP billions of taxpayer dollars in support of this evil.

In less the 50 days, congress will vote thumps up or down on Obama’s insane Iran nuke deal. Thumps up equals officially turning our backs on our ally, Israel.[13]

Brother and sister Americans, if congress fails us on either of these two crucial issues, how can we expect God to bless America?