Those of you who think the Zimmerman case is a distraction are wrong. Dead wrong. It’s all a part of the plan, the agenda and has been so from day one. 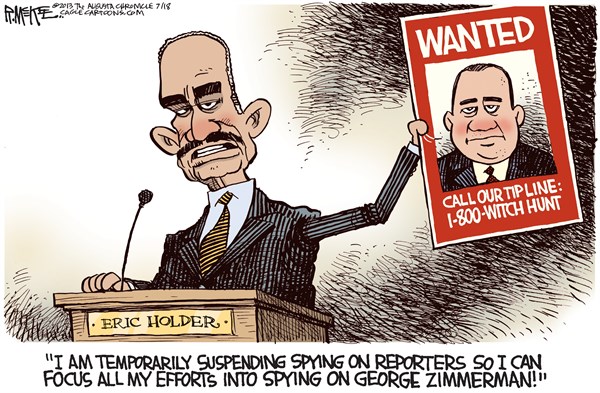 Obama knew, Holder knew, they all know there was no case. They knew that there wouldn’t be a conviction. That was all a part of their plan.

Obama’s DoJ sends a bunch of rabble rousers to: Sanford,: Florida: in March of 2012 to stoke the flames of a small: local story in an attempt to stir up the useful idiots of the black community to take to the streets to demand that Zimmerman be arrested and tried for murder.

There were no grounds for an arrest let alone a trial. The DoJ staged march’s, rally’s and townhall meetings to further the Obama agenda that America is a racist nation that would not even seek justice for the shooting of a poor little black baby boy by an evil, gun toting white man. (Who happened to be half Hispanic.)

Then the pressure is on the DA and local police. When the Chief of police refuses to arrest Zimmerman what happens? The operatives of the Obama DoJ pressure the city to fire Bill Lee. They fold and they do just that.
With a new police chief in place, and an Obama selected State Attorney to call for a special prosecutor the case then moves forward.

All along they knew they had no case. They knew they would loose. They knew that Zimmerman would walk but that was OK. That didn’t matter; in fact that was what they wanted. Because if Zimmerman had been convicted how could they then tell the idiots that justice was not equal for a young black child? How could they advance the agenda of a racist: America: if it appeared that justice had prevailed and the evil white – Hispanic killer was going to jail?

So when Zimmerman is acquitted this works perfectly into the hands of Obama and his Alinsky style followers. This way he can decry to the masses as he did: Friday: afternoon that the system just didn’t work. That it’s now legal to shoot young black babies in the streets of: America.

So: Friday: Obama takes to the stage to further fan the flames of hatred and division in: America: by declaring that this was a case based solely on racial profiling and a racist system of justice. Not to mention the “stand your ground law” and CCW permit holders.

I’m telling you that this is a very important story! Not a red herring to distract you away from the IRS, NSA or: Benghazi: scandals. No this case is equally as important as all of those. In fact this is just the latest in a LONG list of scandals involving Obama.

The most dangerous man in: America.