“The base of the Democratic party used to be working people, regardless of race, ethnic, or ethnic identity, sexual orientation, et cetera. That was a Roosevelt agenda. That was the Truman agenda. Over time, and I think particularly over the last eight years, the Democratic Party has moved into interest group politics and in many cases white working people have become the whipping post, or were. I think what you saw in this election here is white working people in these rural areas seeing that someone actually was articulating the fact that they had become disenfranchised and they gravitated toward Trump in my view…” — Former Democratic Senator Jim Webb[1] 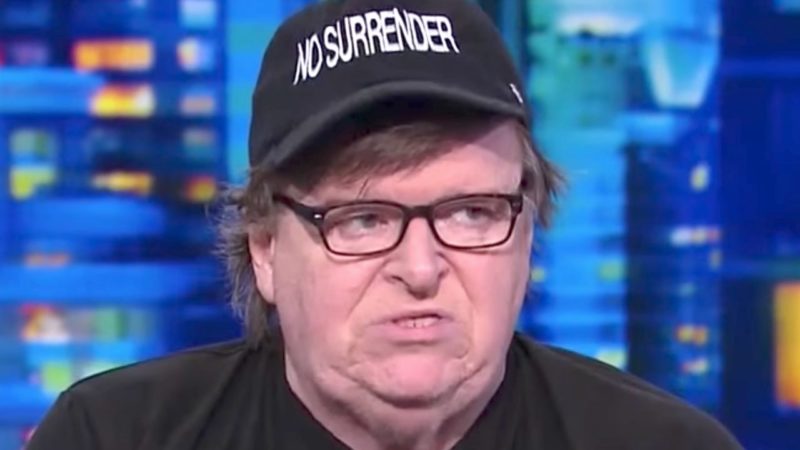 Let’s see, what was it that Michael Moore said earlier this week[3]?

“The angry white guy is dying out, and the Census Bureau has already told us that by 2050, white people are going to be the minority, and I’m not sad to say I can’t wait for that day to happen. I hope I live long enough to see it because it will be a better country.”

Of course, there are places in America where white people are already a minority; so why doesn’t Michael Moore live in one of them? If he really believes he’s better off with less white people around, why didn’t he build a mansion in Compton or inner-city Detroit instead of having one in 96% white Torch Lake[4]?

Like Michael Moore, liberals generally love to mock white people. They especially love to put down those white, cis males …well, until the chips are down anyway. Then it’s, “Can you help us out?”

White cops are all racists looking for an excuse to pick on black Americans until someone threatens or robs a liberal and then he immediately runs to the cops.

The rich, white guys are greedy and evil until someone needs a job or they’re asked to fund most of the government with their taxes.

Nobody says “no” to the white guy giving out charity, the white redneck pulling you out of a snowdrift with his truck or the “Cajun Navy” guy with a bass boat taking people out of their homes in a flood.

Of course, why should they say “no?” We’re all Americans, right? Race doesn’t matter, does it? If you’re stuck on your roof because of a flood, the race of the person that rescues you shouldn’t matter all that much.

Someone tell liberals that.

Do you think I’m overselling how anti-white liberals (even white liberals) have become? If so, here are just a few recent headlines.

Affinity Magazine wrote, “Actually… Straight White Men Are the Root of Our Problems[5].” The Root put out an article called “Polite White People are Useless[6].” A Boston University scholar said “Stephen King’s ‘It’ Is Bad Because It’s Full Of ‘White, Straight, Able-Bodied’ Males.” CNN also blamed ordinary people for being “white supremacists by default[7].” There were people on Twitter hoping Hurricane Harvey would help “cleanse” Texas of white people[8]. Then there was this comment from Munroe Bergdorf, the first transgender model hired by L’Oréal[9].

“Honestly, I don’t have energy to talk about racial violence of white people any more. Yes ALL white people. Because most of ya’ll don’t even realize or refuse to acknowledge that your existence, privilege and success as a race is built on the backs, blood and death of people of color. Your entire existence is drenched in racism. From micro-aggressions to terrorism, you guys built the blueprint for this sh*t. Come see me when you realize that racism isn’t learned, it’s inherited and consciously or unconsciously passed down through privilege. “Once white people begin to admit that their race is the most violent and oppressive force of nature on Earth … then we can talk.”

All of that happened in the last week and it’s very typical. Imagine being pummeled with that garbage daily on top of social media posts from legions of black liberals who hate white people or feminists who hate white men every bit as much as the KKK hates black Americans. It’s a never stopping symphony of attacks on whites. How warped has the Left gotten on this issue? Well, CNN’s Sally Kohn says that all the following things, in one form or fashion, are “covert white supremacy.[10]”

* Believing we are post-racial

* But, we’re just one human family

Although they hesitate to come right out and say it, the liberal line is either that you should hate yourself for being white or alternately attack other white people for their race, in hopes that you’ll get a pass from the white ‘guiltpocolypse’. That’s where the Left is today and it has real consequences for the country. Since liberals don’t care about the wellbeing of our nation, it’s worth noting that it has huge political consequences for them as well.  Just look what the New York Times had to say about the subject this week, The more white voters care about being white, the more they like President Trump[11].

In the wake of the presidential election, we’ve all been asking simplistic questions about how Donald Trump won. Was it economics? Was it racism? Was it misogyny? Did it come down to identity? We know that it can’t have been just one thing, and that President Trump’s triumph was a concoction of many things. Nonetheless, several factors came together in a peculiar way, with serious electoral consequences. Millions of white voters began to see themselves more openly not as white supremacists but as white identified.

…Ashley Jardina, a political scientist at Duke, puts it this way: “When the dominant status of whites relative to racial and ethnic minorities is secure and unchallenged, white identity likely remains dormant. When whites perceive their group’s dominant status is threatened or their group is unfairly disadvantaged, however, their racial identity may become salient and politically relevant.”

Here’s another way to put it: when you ENCOURAGE identity politics among black Americans and Latinos while regularly aiming vicious criticism at white Americans based on their race, many white Americans will vote accordingly after becoming sick of the abuse and the hypocrisy. Liberals have worked themselves into this weird place where they quite correctly condemn the KKK, white supremacists and Nazis, but encourage similar mentalities among minority groups because they believe it will benefit them politically. The more entrenched this disgusting mentality becomes, the more you can expect white Americans to act and vote like just another minority group. Does that sort of balkanization sound healthy? For example, do you think it would be good if white Americans had their own version of the NAACP designed to pursue their racial interests? Do you think white voters should explicitly vote for candidates because they share their race like black Americans often do? Should white Americans be given an explicit advantage in college entrances and government jobs for a few years to make up for all the years minorities were given preference over them because of their race via Affirmative Action? You can give every lame excuse in the book why it’s okay to spew hate at white Americans, but there are always consequences. Ultimately, nobody loves or respects someone who treats him like garbage because of something he can’t change.

Liberals should never forget that it is dangerous to mock people who believe in a color-blind America because eventually you may convince them that you’re right.