Obama has been draping himself in families of the children murdered in Newtown.

MSNBC’s Martin Bashir suggested that Republican senators need to have a member of their families killed for them to support the Democrats’ gun proposals. (Let’s start with Meghan McCain!)

In a bizarre version of “A Christmas Carol,” CNN’s Carol Costello fantasized about “a mother who lost her child,” showing up and knocking on Sen. Rand Paul’s door, saying, “Please don’t do this!” 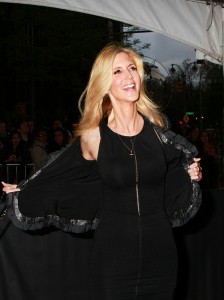 [1]The victims of gun violence are the left’s latest “human shields” — a term coined by me in Godless: The Church of Liberalism
— for their idiotic ideas. At least it’s not the godawful Jersey Girls this time.

The one clear thread that unites all the mass murders currently being exploited by the Democrats is that they were committed by visibly crazy people who were unaccountably not institutionalized. But Democrats refuse to do anything about crazy people. Apparently, the views of families with relatives murdered by severely disturbed individuals are no longer relevant when it comes to institutionalizing the mentally ill.

If liberals had a decent argument for taking guns away from the law-abiding while doing nothing to prevent schizophrenics from getting guns, they’d make it. Manifestly, they don’t, so they send out victims to make the argument for them, knowing no one will argue with a person whose child has just been murdered.

This allows liberals to act as if Republicans’ only counter-argument to their idiotic gun control proposals is: We don’t mind dead children.

All the actual evidence — mountains of it, in peer-reviewed studies by highly respected economists and criminologists and endlessly retested — shows that limits on magazine capacity, background checks and assault weapons bans will accomplish nothing. Only one policy has been shown to dramatically reduce multiple public shootings: concealed-carry laws.

Unfortunately, there are no similar studies on the effect of involuntary commitment laws for the mentally deranged because no such laws exist anymore and therefore can’t be tested. But we do know that the number of mass public shootings has ballooned since crazy people were thrown out of mental institutions in the 1970s.

For most of the 20th century, from 1900 to 1970, there was an average of four mass public shootings per decade. Throughout the ’70s, as the loony bins were being emptied, the average number of mass shootings suddenly shot up to 13. In the 3.3 decades since 1980, after all the mental institutions had been turned into condos, mass shootings skyrocketed to 36 on average per decade.

Mental illness was blindingly clear in the case of Seung-Hui Cho, who committed mass murder at Virginia Tech. Jared Loughner showed signs of schizophrenia for at least five years before he shot up the Tucson shopping mall. James Holmes was being treated for mental illness long before his massacre at the Aurora movie theater. It was clear to Adam Lanza’s mother — nearly the only person who had contact with him — that he was mentally disturbed and had violent fantasies. (Three-quarters of matricides are committed by the mentally ill.)

We can add paranoid schizophrenic One L. Goh, who committed a mass murder at a Christian college in California last year, and the Muslim Army major, Nidal Hasan, known to be crazier than an MSNBC host, who killed 13 and injured 30 in a “gun-free” area of the Fort Hood Army base a couple years ago. For hundreds more examples of the mentally ill committing murder, read E. Fuller Torrey’s book, The Insanity Offense: How America’s Failure to Treat the Seriously Mentally Ill Endangers Its Citizens.

But Democrats simply will not address the one thing that is screaming out from all of these mass murders, which is that they were committed by crazy people.

As soon as the issue of mental illness came up at a Senate hearing on gun violence in January, Sen. Al Franken leapt in to say: “I want to be careful here — that we don’t stigmatize mental illness. The vast majority of people with mental illness are no more violent than the rest of the population.”

Liberals at ThinkProgress.org and The Huffington Post hailed Franken for his sensitivity. Can we check with the families of the children murdered by crazy people on the danger of “stigmatizing” the mentally ill?

Contrary to Franken’s claim, some of the mentally ill are far more likely to be violent. According to the National Institute of Mental Health, schizophrenics and similarly disturbed individuals are three times more likely to commit a violent crime than others.

The mentally ill are also more likely to be the victims of violence. Ask the sisters of the crazy homeless woman “Billie Boggs” how grateful they were to the ACLU for keeping Boggs out on the street.

Meanwhile, the only target of Democrats’ gun proposals — legal gun owners — are less likely to commit violent crimes than others. To the contrary, armed civilians justifiably kill about 1,500-2,800 felons a year, compared to 300-600 legal killings by the police. Responsible armed citizens protecting us from violent criminals should be subsidized rather than taxed and harassed.

After five mass shootings by deranged lunatics, even liberals know that the only policy — apart from concealed-carry laws — that might have stopped these shootings are laws permitting the institutionalization of the mentally ill.

That’s why they keep claiming their gun bills address mental illness. Warning: Read the bill. You will find nothing in any of the Democrats’ “gun safety” proposals that will make it easier to commit a crazy person or to prevent him from buying a gun.

The Democrats’ argument for doing absolutely nothing about the dangerously mentally ill, while disarming crime-preventing armed citizens is: Tell it to this weeping mother. If the Democrats’ “gun safety” bill passes, there’ll be plenty more weeping mothers to tell it to.