My latest Townhall column is called, Liberals Want California to Secede? Godspeed, Libs…[1] Here’s an excerpt from the column. 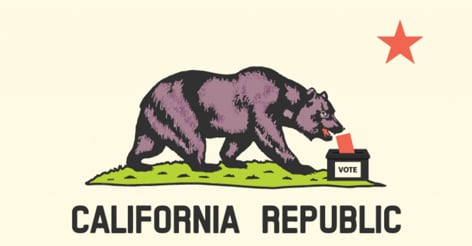 As disgraced Democrat John Edwards liked to say, “There are two Americas.” There’s an America where people love this country, want it to be successful and believe in using tried and tested means like capitalism, conservatism, the Constitution and Christianity to make that happen. Then there’s an America where this country is shameful, deserves to be brought down a peg and all the old values that served us in the past need to be disgraced and destroyed. These views are becoming increasingly difficult to square.

Take Hillary Clinton, Nancy Pelosi and Barack Obama, for example. Are there any meaningful areas of agreement you have with them politically as conservatives? Do you agree with them on abortion, gay marriage, Obamacare, the Constitution, controlling the border, taxes, states’ rights, spending, judges, school choice, etc., etc.? Those disagreements might be mostly irrelevant if liberals were content to live how they want in states they control while leaving everyone else alone. Instead, liberals have worked incessantly to create an all-powerful centralized government that they believe should marginalize and prey upon people who don’t share their political beliefs. The idealized liberal world is one where you do the work, they take your tax dollars and give that money to people who don’t work as hard as you in exchange for keeping the Left in power. That unworkable liberal philosophy is inexorably marching the country towards bankruptcy and ruin.

…Which brings us to California and the “Calexit.” Inspired by Britain’s “Brexit” from Europe, a group called Yes California[3] wants to put leaving the United States on the ballot for Californians in 2018. If liberals want California to secede, then conservatives should say, “Godspeed, Libs!” Of course, there are some caveats. Any nuclear weapons and military equipment should stay in the United States. Buy your own military hardware for your new nation. Additionally, large swathes of California aren’t liberal. Roughly half the physical area in California went for Trump over Hillary, for instance[4]. Split the state in two and let the liberal half form its own nation while the conservative “new California” stays in the United States. Given the raw size of California and the deep political differences, the state should be split in two whether there’s a “Calexit” or not.

That begs an obvious question. The Yes California[3] group has an argument about why Californians should leave the United States, but why should the rest of us want it to happen?

Well, if you believe that liberalism is destroying the country, getting rid of California would put a big thumb on the scale for conservatism. California has 55 electoral votes that are automatically in the liberal column every presidential election. Spreading those electoral votes across the other states, or, even better, having California leave while a smaller, more conservative California stays in the country would make it much more likely Republicans would be elected. That might literally be the difference between the country having a bright future and going down the tubes. Additionally, California has two liberal senators and 39 out of 53 of its House members are Democrats. You want to cement in Republican control of the House for the foreseeable future? That shift would probably do it.

That alone would be worth getting rid of California, but there are also economic considerations. For one thing, we wouldn’t need to pay California residents Social Security or Medicare any longer. Given that we’re talking about a state with 36 million people where 11% of the population was over 65 in 2015 with that number projected to rise to 18% in 2030[5], the amount of money saved would be staggering.

Then there’s the state’s enormous debt[6],

“I was a little surprised that the unfunded amount per household is as high as it is,” said Joe Nation, public policy professor at Stanford and director of the data project.

Like Detroit, Puerto Rico, and Greece, California is headed for bankruptcy and by the time it’s done, the bill will likely be over a trillion dollars. If we could wash our hands of that problem, it would be good news for the country.

So, if California wants to say, “Hasta La Vista, Baby,” conservatives across the country should welcome it and do everything they can to facilitate a happy split.