Ever heard of Mia Love? If you haven’t yet, no worries, because you will. She’s a rising conservative star in Utah. She’s the daughter of Haitian immigrants, was the first black mayor in Utah, and would be the first black woman ever to serve as a Republican in the House.

Mia is a dedicated small government conservative who believes in fiscal responsibility and during that interview, she had no qualms about sticking up for the Tea Party.

I want to quote the beginning of a column you wrote about the Tea Party, “I have yet to meet a tea party member who wants to see me “hanging on a tree,” as U.S. Rep. Andre Carson of Indiana recently suggested. He says the tea party considers me a second-class citizen. In truth, as a black conservative woman in Utah, I have been welcomed into the arms of a freedom-loving movement. The tea party reflects the principles of freedom and prosperity black Americans have long fought to win.”
Why do you think so many liberals accuse the Tea Party of racism?

The Tea Party movement has succeeded in shifting the national political narrative toward reducing government spending and programs. For decades the federal government has expanded well beyond its constitutional limitations, creating unsustainable debts and deficits with severe consequences to our economy and our people. Wrangling over what to cut and eliminate is a relatively new process in Washington which threatens the liberal left agenda of expanding government and programs. Shouting racism has long been a weak tactic for attempting to shut down debate in the absence of a principled response.

Since then, Mia has shown up at various blogger events. She also did a short extremely well-received speech at the Republican National Convention.

This is a woman that conservatives and Tea Partiers should desperately want to see in Congress and the good news is that she’s running in a new Republican leaning district. However, there is some bad news, too. She is up against Jim Matheson, a former son of a Utah governor and co-chairman of the Democrat Blue Dog Coalition. Matheson is popular, has deep pockets, is an adept campaigner, and has been beating Republicans in a GOP leaning district since 2000.

That’s who Mia Love has been up against and the money has been flying fast ‘n’ furious. I’ve been told by sources on the ground that more than 10 million dollars has been spent on this House race, which is an amazing sum – but most people have been expecting Jim Matheson to win. After all, as the saying goes, if you want to be the man, you gotta beat the man.

Well, that slogan may be about to change to, “If you want to be the woman, you gotta beat the woman” if this: brand new poll of the race is even close to being right[2].

For 12 years, Jim Matheson has been a political escape artist, managing to wiggle free from every trap the Utah Republicans have thrown his way.

But after six successful elections, his charmed political run may be coming to an end.

Matheson trails Republican challenger Mia Love 52 percent to 40 percent in a new poll conducted for The Salt Lake Tribune, a large margin in a race where, even a few days ago, both campaigns were predicting a tight finish.

…The Tribune poll, conducted by Mason-Dixon Polling & Research, found that the coalition of Democrats, independents, moderate Republicans and women that Matheson has united in past elections is failing to coalesce this time around, with just 9 percent of Republicans crossing over to support him.

Matheson’s poll showed him getting 19 percent of GOP support.

We all know who’s taking Utah at the top of the ticket, but on election night, keep an eye on those Utah returns and let’s hope that: Mia Love[3]: can become yet another conservative rock star in the House. 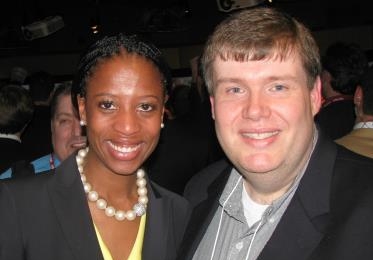