Maddow and the NPR-MSNBC Alliance

Anyone who clicks around on the National Public Radio website is often bombarded with ads for MSNBC. Naturally, if you love one hard-left network, you’ll love the other. But the promotion isn’t just in advertisements. 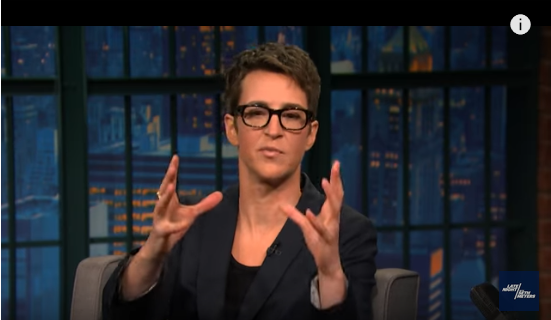 Yes, conservatives: You’re being forced to underwrite with your tax dollars what you’re about to read. And you’re not going to like it.

On March 27, the NPR-distributed show “Fresh Air” with host Terry Gross devoted its entire hour to MSNBC host Rachel Maddow. Gross honored her at the start as “the host of MSNBC’s top-rated show.” That’s like applauding the tallest pygmy. Sean Hannity crushes her nightly in the ratings and always has. But Gross is clearly a fan: “Each weekday night, she talks about issues in the news and important issues that she thinks most of the media have underplayed or overlooked.”

The way those NPR folks see it, the national media underplay and overlook the truths that leftists want exposed. It’s not the liberal media. It’s somehow the moderate-Republican media that fail to hold the government accountable to left-wing concerns.

Gross’ most notorious NPR interview may be the Bill O’Reilly Storm-Out of 2003. NPR fans say O’Reilly left the studio as a stunt. But there’s no doubt Gross unloaded her hostility. When he left, Gross directed questions to an empty chair. Even NPR’s ombudsman at the time rapped her on the knuckles: “By coming across as a pro-Franken partisan rather than a neutral and curious journalist, Gross did almost nothing that might have allowed the interview to develop.”

So, for a dramatic contrast, note how Gross began her Hour of Maddow with several bouquets of rhetorical roses: “There’s an article about Maddow and her book in the current edition of The American Prospect by our critic at large, John Powers. He writes: ‘Maddow embodies virtues — rationality, good humor and courtesy — that make her an alluring alternative to our culture’s furious partisan stridency. Maddow doesn’t merely want to win viewers over to her side. She wants to make them smarter and better informed.'”

That’s vomitous. Has Gross ever watched “The Rachel Maddow Show”? She doesn’t show partisan stridency? Last year, she dismissed a potential Newt Gingrich surge as almost as ridiculous as a Rick Santorum surge, which she said would never happen. The graphic on screen mocked Newt with the word “Shampaign.” Then she mocked Santorum’s name as it’s mocked on Google — as a mix of semen and feces: “But the idea of a Newt Gingrich surge is almost as absurd as people, uh, you know, Googling ‘Rick Santorum’ and saying, ‘I like what I found here. I’m going to vote for this guy.'”

That Gross can really pick ’em when it comes to civil nonpartisan discourse.

Gross returned again and again to the impressiveness of Maddow. She cited, for example, Maddow blaming an American anti-gay spokesman for an execute-the-homosexuals bill in Uganda. After playing a long clip from Maddow on MSNBC, Gross proclaimed she had witnessed broadcast excellence.

Fake authority? Gross might have been talking about herself.

Then Gross complimented Maddow’s show-opening essay — which shamelessly copycats O’Reilly’s format: “You kind of put it together like you’re taking different pieces of a puzzle and putting it together, and by the end of the essay, you see a picture emerge, you see a pattern emerge. … What is the process for you of writing that opening essay? Because it seems to me that an extraordinary amount of work must go into that.”

This allowed Maddow to joke humbly, “Essentially, the process of working on my show is grinding your bones to dust each day an inch at a time.” Genius is such hard work.

The ending was the most preposterous. Gross informed Maddow that “some people equate Fox News and MSNBC” as “flip sides of the same coin.” Maddow disagreed, claiming that while Fox was founded to “advance the interests of the Republican Party,” MSNBC “isn’t a unified political project to accomplish the goals of any external political body.”

Conservatives, I told you that you wouldn’t like reading this. All of this was taxpayer-funded.

L. Brent Bozell III is the president of the Media Research Center.