The Never-Ending Liberal Bait And Switch

Although a donkey fits the Democrat Party well as a mascot, a shifting goalpost would work even better. With liberals, it’s almost always a bait and switch. 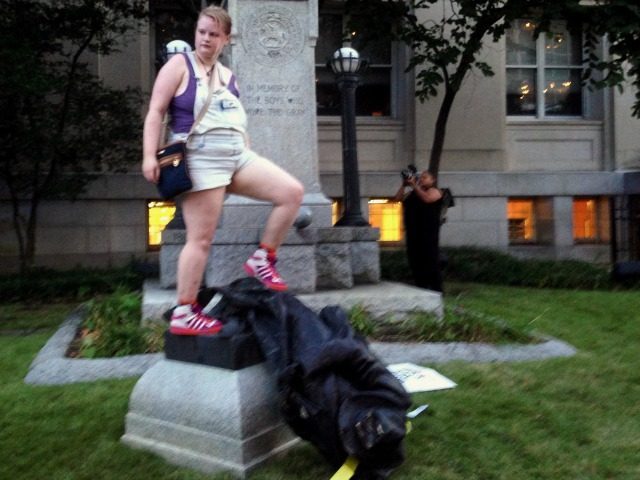 Take the Confederate flag, for example.

That’s what liberals wanted, right? So, that was it? No, that was the start of the bait and switch.

The Dukes of Hazzard was taken off the air. Confederate flags were ripped down. There were liberals who said that waving a Confederate flag should be considered a hate crime and Southerners in general were attacked as racist. Then people who protested this stupidity were labeled as bigots.

Next the Left moved on to statues. Liberals demanded that the statues be taken down and began to vandalize them. Now, they are taking it further. In fact, the Left has gotten so hysterical about this subject that ESPN pulled an Asian broadcaster by the name of Robert Lee off of a University of Virginia game because there was a controversy over a Robert E. Lee statue. Now, we begin a fight over taking down the hundreds and hundreds of Confederate monuments across the country. After that (and, yes, this part has already started) the battle will be over renaming buildings and streets. Liberals in Memphis literally dug up the graves of Nathan Forrest and his wife; so even removing the corpses of Confederate soldiers isn’t off the table. But that’s it, right?

On my new Twitter account What Liberals Say: Liberals in their own words[2], you’ll see that New York is discussing[3] tearing down a statue of Columbus and even Grant’s Tomb. Meanwhile, liberals in Baltimore took a sledgehammer to a Christopher Columbus[4] monument and even Al Sharpton came out against[5]the Thomas Jefferson memorial.

So, you may think you’re arguing about the Confederate flag or the statue of Robert E. Lee, but liberals are also really arguing about memorials to Columbus, Grant, Jefferson, Washington, Lincoln, you name it.

Furthermore, not only are you never really arguing about what you think you’re arguing about with a liberal, liberals will paint you as evil for continuing to support something they were backing five minutes ago. How many liberals did you hear demanding gay marriage 20 years ago? Almost none. Then, the second Barack Obama changed his mind about it, everyone who disagreed with gay marriage became a gay-hating homophobe. Did you notice the shocking speed with which we moved from “Liberals would never demand that women share bathrooms with men. That’s crazy….” to, “Anyone who doesn’t support men and women in the same bathroom is transphobic”?

Along similar lines, condemning whatever liberals want you to condemn to try to win favor with them is pointless. Go ahead and support their call to take down Confederate monuments. Do that and they’ll then demand that you oppose any sort of efforts to prevent voter fraud. Agree to that and they’ll insist that you admit that you’re racist by default since you’re white. Go along with that and they’ll say you have to vote for whatever tyrannical socialist they run in 2020 to be a good person. Then finally, if you say that’s a bridge too far, they’ll say, “Ha! Knew it! You’re just another one of those white supremacist Republicans!” There is no win/win to be had. There is no honest debate. There’s only a bait and switch designed to elevate liberals at everyone else’s expense.

Let me also note that I am not against apologizing when you’re wrong. I do it. It’s the right thing to do….except when you’re dealing with liberals. Never apologize to liberals. But, what if you’re 100 percent wrong? Still, don’t apologize. Why? Because liberals don’t view apologies like normal human beings. They view even the most sincere apology from a non-liberal as a club they can use to beat you. If you get in the crosshairs of some mob of social justice warriors, you’re a fool if you think that they will let you be because you were big enough to admit you were wrong. To the contrary, they will demand that you be fired, that you be scorned, that no good person could ever have anything to do with you again and they will point to your own apology as absolute proof that they’re right.

Other times, the liberal bait and switch is more insidious. Remember how it worked with Obamacare?

Democrats promised Obamacare would dramatically cut the cost of health care, that people could keep their doctors and plans if they liked them and everything was going to be wonderful, amazing and better in every way. Of course, none of that turned out to be true. Later, after trying to blame the failures of Obamacare on Republicans, liberals admitted that they had to lie to get the bill passed and said we should all be grateful that they did. Besides, everyone knew they were lying, right? Now that the system that they promised would be the best thing ever is falling to pieces, their solution is single-payer health care, which coincidentally turns out to be what many Republicans said they were trying to do all along. According to Republicans, the idea was to design a plan that would fail so they could try to do a full government takeover. That might sound a bit conspiratorial, except as it turns out, that’s exactly what happened. Going along with a bad liberal idea almost inevitably turns out to be a set-up or justification for an even worse idea down the road.

You want intellectual honesty from liberals? You’re not going to get it. Human decency? Fairness? Logic? A consideration of the societal or economic costs of their ideas? Do you even just want them to care whether the programs they propose work or not? You’re not getting any of those things from the vast majority of liberals. All you’re going to get is an unwavering conviction that everything liberals want to do is good because it’s liberal along with baiting and switching until they get their way.