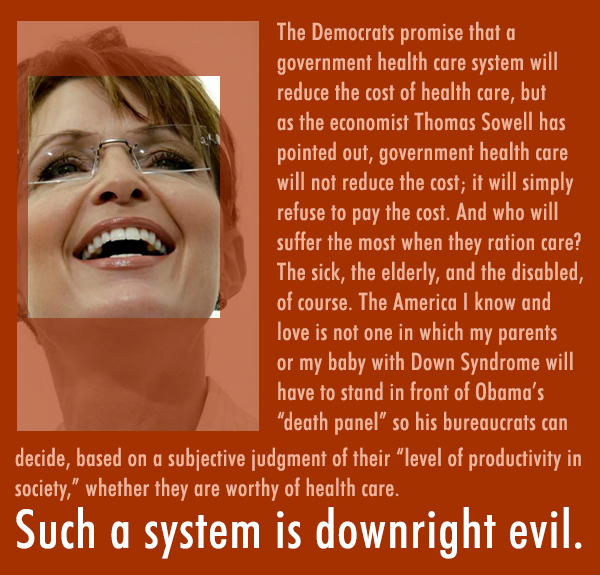 Remember the liberal howling when Sarah Palin said this?

When Sarah Palin correctly pointed out that Obamacare had built in death panels that would ultimately lead to needed medical treatments to seniors being cut to save money, the Left flipped out. They claimed that it was crazy to suggest that there was something like that in the bill and they assured everyone that they would never, ever, ever back something like that, and that they were offended that Palin even suggested it.

Of course, there was one problem with that assertion: Liberals have no qualms about lying to the American people. They do it all the time. That’s how they deal with the fact that many of their views are unpopular: They just lie about what they want to do. It’s such a common occurrence that liberals often just assume liberal politicians who say things that differ from the liberal line are lying. For example, do you ever wonder why liberals, for the most part at least, give Barack Obama a pass for being against gay marriage? There’s a simple reason for it: They think he’s lying. (Hawkins’ Note: How’s that statement looking today?)

The latest voice to join the chorus explaining why we can’t control healthcare costs without death panels is: Steven Rattner, who was a counselor to the Treasury secretary in the Obama administration[3].

Well, maybe not death panels, exactly, but unless we start allocating health care resources more prudently – rationing, by its proper name – the exploding cost of Medicare will swamp the federal budget.

But in the pantheon of toxic issues – the famous “third rails” of American politics – none stands taller than overtly acknowledging that elderly Americans are not entitled to every conceivable medical procedure or pharmaceutical.

…To Mr. Obama’s credit, his plan has more teeth than Mr. Ryan’s; if his Independent Payment Advisory Board comes up with savings, Congress must accept either them or vote for an equivalent package. The problem is, the advisory board can’t propose reducing benefits (a k a rationing) or raising fees (another form of rationing), without which the spending target looms impossibly large.

…No one wants to lose an aging parent. And with price out of the equation, it’s natural for patients and their families to try every treatment, regardless of expense or efficacy. But that imposes an enormous societal cost that few other nations have been willing to bear. Many countries whose health care systems are regularly extolled – including Canada, Australia and New Zealand – have systems for rationing care.

Take Britain, which provides universal coverage with spending at proportionately almost half of American levels. Its National Institute for Health and Clinical Excellence uses a complex quality-adjusted life year system to put an explicit value (up to about $48,000 per year) on a treatment’s ability to extend life.

At the least, the Independent Payment Advisory Board should be allowed to offer changes in services and costs. We may shrink from such stomach-wrenching choices, but they are inescapable.

What Ratter deliberately leaves out is that although the Independent Payment Advisory Board AKA the Death Panel can’t reduce benefits or raise fees, they can cut reimbursement fees for services. This is perfect for the purposes of weaselly politicians because the Death Panel can cut reimbursement rates for services they don’t want people to have so low that no one will do them, but then who gets blamed? Those “greedy” doctors who aren’t willing to lose money to give granny and grandpa the treatments they need….and guess what, folks? Steven Rattner, Nancy Pelosi, Harry Reid and yes, Barack Obama would all be just fine with that.