Send Us Your Violent Bigots, Yearning To Butcher Our Citizens

It’s been a bad few weeks for cultural assimilation. Last month, two welfare-receiving immigrants in the United States, Dzhokhar and Tamerlan Tsarnaev, set off bombs at the Boston Marathon, killing three people and injuring hundreds. By the end of the week, they had murdered a cop and engaged in a wild shoot-out and bomb-throwing melee with the police. 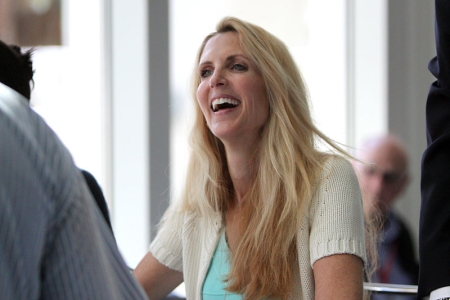 Last week, a couple of ethnic Nigerians butchered a British soldier with meat cleavers in broad daylight on a bustling street in a London suburb, then boasted about the murder in video interviews with bystanders. (On the bright side, they did not claim to be princes and ask for your life savings.)

Also last week, immigrants, mostly Muslims, began rioting in peaceful Sweden — burning schools to the ground, torching cars and throwing rocks at the police. (Who among us hasn’t lost his temper trying to assemble an Ikea china cabinet?)

Supporters of the West’s current immigration policies can’t keep ducking reality. So they try to shut down debate by calling their opponents racists, xenophobes, know-nothings and fascists.

The English Defense League (EDL), for example, is portrayed in the media as a bunch of racist football hooligans. So I was surprised to learn that the EDL has not only a Jewish division, but a gay division. (Harvey Fierstein could be their president!) They expressly support Israel against Muslim terror and burn Nazi flags at their rallies.

Apparently it is considered “fascist” to oppose actual fascists immigrating to your country.

A few years ago, an opinion piece in The New York Times denounced the pro-gay positions of anti-immigration groups such as the EDL for “co-opting” gays. The co-opting is so thoroughgoing that the anti-immigration Dutch politician Pim Fortuyn was himself gay. He was assassinated by a vegan animal rights activist upset at criticism of Muslims.

But surely members of the EDL oppose Britain’s immigration policies out of ignorance?

It briefly seemed so. A month ago, the head of the EDL, Tommy Robinson, provoked a round of liberal sneering when he tweeted: “welcome to twitter homepage has a picture of a mosque. what a joke.” Various media outlets leapt to point out that the photo was, actually, the Taj Mahal.

The liberal Guardian mocked: “It’s worth pointing out that the ‘mosque’ that started this … was in fact the Taj Mahal, the marble mausoleum in India. It’s almost as if the very existence of the EDL is based on false information, suspicion and idiocy.”

Except — oops –— it wasn’t the Taj Mahal. It was a mosque — the Grand Mosque in Muscat, Oman, to be precise — as The Guardian quietly admitted in an altered photo caption after stealthily removing the comment about the EDL’s “idiocy” for imagining it was a mosque. It’s almost as if the very existence of The Guardian is based on false information, suspicion and idiocy.

Britain, Norway, Sweden, Switzerland and Spain have recently enacted, or are considering enacting, further restrictions on immigration, alarming immigration enthusiasts. The New York Times reported this week that the “right-wing Swiss People’s Party” is requesting a referendum on immigration.

Wait a second! A referendum doesn’t sound fascist at all. In fact and to the contrary, it’s always the advocates of unrestricted immigration who try to avoid letting the people vote. Marco Rubio and the rest of the pro-amnesty “Gang of Eight” don’t even want the country to know they’re about to vote on a mass immigration scheme.

Liberals say, “Basic human rights are not subject to a vote!” — and then define “basic human rights” as “the right of people who don’t live in your country to move there.”

Manifestly, opponents of open immigration are not fascists, anti-Semitic, anti-gay, intolerant or idiots. But as long as we’re on the subject, may we inquire into the tolerance and other Western values of the potential immigrants themselves?

Last week, U.S. law enforcement officials reported that Muslim immigrant Ibragim Todashev admitted that he and Boston bomber Tamerlan Tsarnaev had murdered three Jewish men in a Boston suburb on the 10th anniversary of the 9/11 attack. (Which also, I believe, was the work of immigrants.) The victims’ throats were cut from ear to ear, nearly decapitating them. One was Tamerlan’s best friend.

Searching The New York Times’ webpage for “English Defense League,” turns up this multicultural story out of Saudi Arabia: “Online Campaign Draws Attention to Case of Saudi Father Accused of Rape and Torture.” The father, Fayhan al-Ghamdi, a prominent Islamic cleric, served only a few months in a Saudi Arabian prison for allegedly raping, burning and fatally beating his own 5-year-old daughter.

It’s not just Muslims who aren’t warming to Western values. Polls by the Anti-Defamation League going back decades have shown a steady decline of anti-Semitism in the U.S. But a 2002 poll showed a surprising upsurge.

While 17 percent of all Americans were said to hold “strongly anti-Semitic” views, 35 percent of Hispanics did — as did 44 percent of foreign-born Hispanics.

(Note to Sheldon Adelson: It may be time to give your Hispanic employees a raise.)

Liberals get a kick out of accusing their opponents of what they themselves are guilty of. But this may be the most audacious reverse-guilt play yet. For objecting to the importation of primitive, violent, child-rape-forgiving bigots, the opponents of mass immigration are accused of bigotry.