Growing up in California and getting my education through the Public School system, I inevitably was afraid of guns. I was taught that I should be terrified of anything that is created to kill and especially something that can misfire unexpectedly and kill yourself or a loved one. I personally have even gone shooting with various friends at gun ranges shooting off 15 rounds at a time with my eyes closed while the voice inside of me screamed that what I was doing was wrong, dangerous and bad. I personally had chosen to not get involved with guns because they are bad and a thing for other people (mostly hunters) to deal with. Mostly deep down in the recesses of my psyche I thought guns were bad-unpredictable weapons and staying away from them would keep me safe.

Recently, I had an experience that dispelled the cultural myths about guns that I had grown up with. I had the opportunity to attend a 4-day firearms training course and resort called Frontsight[1].

The first day I walked around with a holster for my Springfield XD on one side and two magazines cartridges filled with 9mm bullets on the other. The gun assigned to me was always on my right hip just inches from my right hand. It was unloaded, but it was still unnerving to have something so close to my fingers that could possibly “accidentally” blow them off. That was my mentality throughout the first day. To make things worse there were even times where we were told to stand on a line facing “down-range” and actually load and unload the guns AND fire!, all by ourselves (with a partner standing close behind). Inside my head I was pretty sure that this “bad gun” was going to turn on me any minute and fulfill its nature by wounding me at some point or that a neighbors gun would misfire and hit my foot and lose some mighty important digits. Nothing that I had imagined happened. It was actually surprising that despite my extreme ability to think with common sense that these thoughts constantly flooded my mind. I began to accept what I had been telling people for years that a gun is not a weapon and that people are the weapons. My cultural training and fear of guns began to melt away as I realized that the only times I could possibly be in danger of injury from a gun would be when I lost focus or a neighbor became distracted. 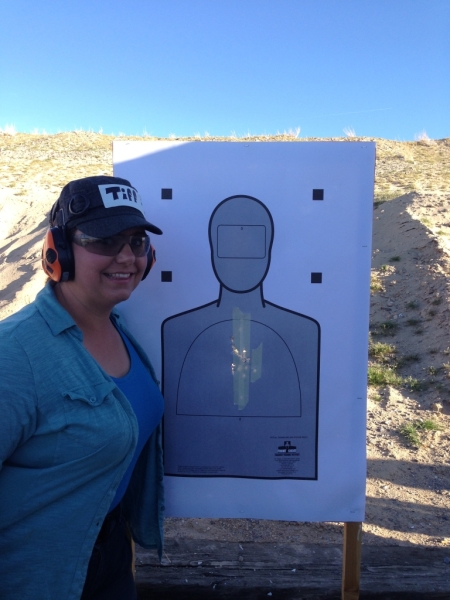 Just a couple nights ago I thought about the wild frontier compared to how we live today and compared the safety of the two. Today with technology and development of society compared to the primitive culture of my forefathers, deductive reasoning would be- no wildlife to attack me and no guns to hurt me so I am safe. Here are the hard facts: 150 years ago 100% of the population owned guns and it was rare to run into an actual hardened criminal. Today less than 35% (some even say 20%) of the nation’s population own a gun and 6.5 percent of the U.S. population has a felony record, and one in 15 people have gone to prison at some point. Can you honestly compare those stats and say your world is safer without guns?

I would like you to consider your personal contribution to Second Amendment Atrophy. There is a possibility that you own a gun. You might even go shooting once a month. But are you actively training yourself to become a guy who can hit a target multiple times in the same spot? Or are you considering every aspect of having a gun as a tool for self protection for you and your family. There is a lot more to exercising your Second Amendment than pointing a gun at a target.

* I learned that the number one rule to handling a gun is safety.

*I learned that being a gun owner is useless unless you have the gun on you, because you never know if someone is going to bust into the local bodega or into your house and you find yourself unarmed. No criminal will wait while you go find your gun.

*I learned that you are useless with a gun unless you are able to handle that gun with confidence– and only regular training on specific and repetitive techniques will bring you that.

* I learned that in an emergency situation if you need to use a gun you will only retain 50% of your actual training and skill. So the more you train the greater your chances become of being better than the person who attacks you.

*I learned that it is not only every Americans basic right to own and carry a gun but that it is their civic duty. I felt ashamed that I have a Cubscout who just became a Boyscout and I am training him to be a good citizen and uphold his civic duty. I have not done so, though I have bought guns for family as gifts I have not given this gift to myself.

*I went to Frontsight and I learned that I have so much more to learn.

My very last day and last minutes at Frontsight were the most important parts of my training and journey to become friends with my gun. I was asked to put up a hostage target and to put the name of a loved one on this target and to shoot the criminals keeping my loved one hostage. My little boys name is Gabe. Through tears I concentrated hard to protect my son. All that I do is for him. If I cannot protect him, I have failed as his mother. 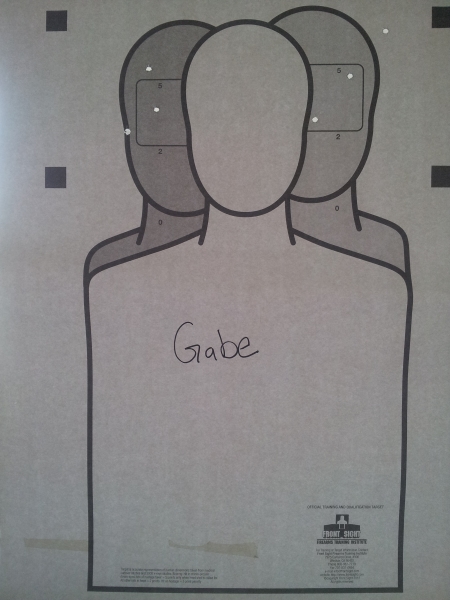 Folks, will join me in our fight to keep the People’s Second Amendment, take up your civic duty and shed the cultural training that guns are bad? Will you help me keep our nation a safer and stronger place by inviting your neighbor to do the same? Criminals are not brave people. The majority of the awful, terrible mass shootings in the past 4 years have been done in gun-free zones. Those are the most dangerous places to be or to have your children because it is the perfect target for someone looking for victims. Please check your local gun laws and if they are too strict on your Bill of Right “Second Amendment shall not be infringed” (shall not be limited in any way), then work to change those laws starting with your City Council. See video here:

Please join me in committing yourself to regularly exercising your Second Amendment and training your children (it’s their right too) before we wait too long and actually allow the heart of our rights atrophy completely and wither away. I am Tiffiny Ruegner, single mom, business owner, Second Amendment/ gun training advocate and student of Frontsight Firearms Training and Resort!