The Gifts Of Jahi

New Year’s Day should be a time of fresh beginnings and forward motion. But for the family of 13-year-old Jahi McMath, the holiday season has been suspended in a cloud of unfathomable pain and suffering: A routine tonsillectomy gone wrong. A beautiful child declared “brain dead.” Lawyers, TV cameras, tears. 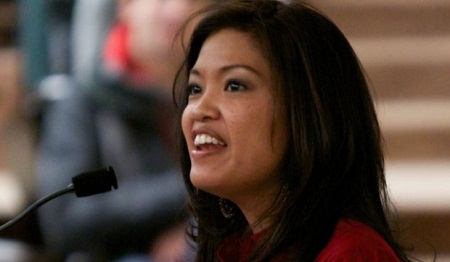 The McMaths are fighting for life. On Monday, they won a court order that prevents Children’s Hospital of Oakland from pulling the plug on Jahi until Jan. 7. Her relatives have been attacked as “publicity hounds” for doing everything possible to raise awareness about the young girl’s tragic case. They’ve been criticized as troublemakers for challenging powerful hospital officials. They’ve been labeled “selfish” and ignorant because they are praying for a miracle.

Why, many observers ask, don’t they just “accept reality” and let go?

As the mother of a 13-year-old girl, I would have done everything Jahi’s mom has done to this point. Everything. Here’s reality: Children’s Hospital faces serious malpractice questions about its care of Jahi. Hospital execs have a glaring conflict of interest in wielding power over her life support. According to relatives, medical officials callously referred to Jahi as “dead, dead, dead” and dismissed the child as a “body.”

The McMath family refused to be rushed or pushed around. They demanded respect for their loved one. I say more power to them.

There are plenty of reasons to question the medical establishment’s handling of catastrophic cases involving brain injury and “brain death.” In 2008, doctors were dead certain that 21-year-old Zack Dunlop was legally deceased after a horrible ATV accident. Tests showed there was no blood flow to his brain. His hospital issued a death notice. Authorities prepared to harvest his organs. But family members were not convinced. A cousin who happened to be a nurse tested Zack’s reflexes on his own one last time as the hospital swooped in. The “brain dead” “body” responded. Forty-eight days later, the supposedly impossible happened: “Brain dead” Zack Dunlop walked out of the hospital and lived to tell about his miraculous recovery on the Today Show.

The immense pressure Jahi’s family faces to give up and give in reminded me of another child written off by medical and government officials: Haleigh Poutre. She’s the miracle child who was nearly beaten to death by her barbaric stepfather. Hooked to a ventilator in a comatose state, she was then nearly condemned to death by Massachusetts medical experts and the state’s criminally negligent child welfare bureaucracy, which hastily declared her to be in a hopeless vegetative state and wanted to pull the plug on her life.

The “experts” were wrong. Haleigh breathed on her own; a caring team of therapists nursed her back to health. Soon, she was brushing her hair and feeding herself. She lived to testify against her abusive stepfather, now behind bars. Her survival is a stark warning against blind, yielding trust in Big Nanny and Big Medicine.

We don’t know what God has planned for Jahi. But I do know this: America has become a throwaway culture where everything and everyone — from utensils to diapers to cameras to babies — is disposable. Elites sneer at the sanctity of life. The Terri Schiavo case brought out the worst, most dehumanizing impulses of American medical ethics debates. And from the attacks I’ve seen on the McMath family, little has changed.

Schiavo’s brother, Bobby, knows exactly how it feels to battle the culture of death and medical expediency. His group, Terri’s Network, and other pro-life organizations are trying to help with Jahi’s transfer to a long-term care facility. In the meantime, Jahi’s plight serves as a teachable moment for those with ears, eyes and hearts open. This is a gift. “Families and individuals must make themselves aware of what so-called ‘brain death’ is and what it is not,” Schindler advises. “Additionally, families and individuals must educate themselves regarding their rights as patients, the advance documentation that must be completed prior to any medical procedure as well as how to ensure best any patient’s rights.”

Jahi’s story should also prompt family discussions about living wills, durable powers of attorney, “do not resuscitate” orders, revocable trusts and advance directives. It’s never too early to broach these uncomfortable matters of life and death.

I want to thank Naila Winkfield and the McMath family for not “letting go” so easily. Their plight is every parent’s worst nightmare. Their fight reaches beyond ideology, race, and class. The united front of the family and the public testaments of their faith in God are gifts. The Instagram image of Naila clasping her daughter’s hand at her hospital bedside — the hope, the desperation, the abiding love — is universal. At the start of 2014, the greatest gift of Jahi is her transcendent reminder that all life is precious. Let it not be taken for granted.

Cruciphobia At Mt Soledad: The Cross The Left Can’t Bear[3]