Three Horrible Things We Learned About Liberals From the Kavanaugh Hearings

If someone told you that liberals don’t care about originalism, sticking to the Constitution, or treating conservatives fairly, the surprise level would be zero. Additionally, I’m sure no one was shocked that lefties were howling, being obnoxious, and generally acting like jackasses while they were protesting. These are things everyone on the Right already knows about the Left. However, there are some very new and terrible things we have learned about liberals after watching the way they behaved during the Kavanaugh hearings.

There is a very good reason why Christine Blasey Ford’s allegations were not leaked until Kavanaugh was about to be confirmed. Simply put, there was no there there — no date, no time, no location, not even a definite year, and all of her own witnesses refuted her story. In the case of Deborah Ramirez, she admitted to her own friends that she doesn’t remember exactly who exposed himself to her, but she still aimed the allegation at Kavanaugh because it was politically convenient for liberals. Michael Avenatti, who is considered a 2020 presidential contender on the Democratic side, came up with a woman making such ridiculous allegations about Kavanaugh running a gang rape ring that they weren’t even taken seriously enough to be investigated. Then there were the anonymous allegations. There were at least three reported in the mainstream media. In what may be the biggest unreported story of this whole affair, according to former DOJ attorney J. Christian Adams, there were a whole hell of a lot more:

As the stories fell apart under scrutiny, it was easy to see that liberals didn’t buy into them. While still trying to falsely portray Kavanaugh as a rapist, they started talking incessantly about whether he drank in high school, what his high school yearbook entries REALLY meant, and whether Kavanaugh getting upset at being falsely accused of being a rapist should be disqualifying.

What we are seeing on the Left are false rape allegations becoming just another weapon in the political arsenal. Even though liberals didn’t succeed in “borking” Kavanaugh, it’s entirely possible this tactic will become a regular occurrence in close campaigns, or whenever there’s a Republican anywhere that liberals really want to stop.

Falsely accusing someone of rape is a terrible thing — and the blasé attitude we saw about it on the Left is scary. How do you work with, cooperate with, or share anything with people who are perfectly fine telling the world you’re a rapist when they have no logical reason to think it’s true? 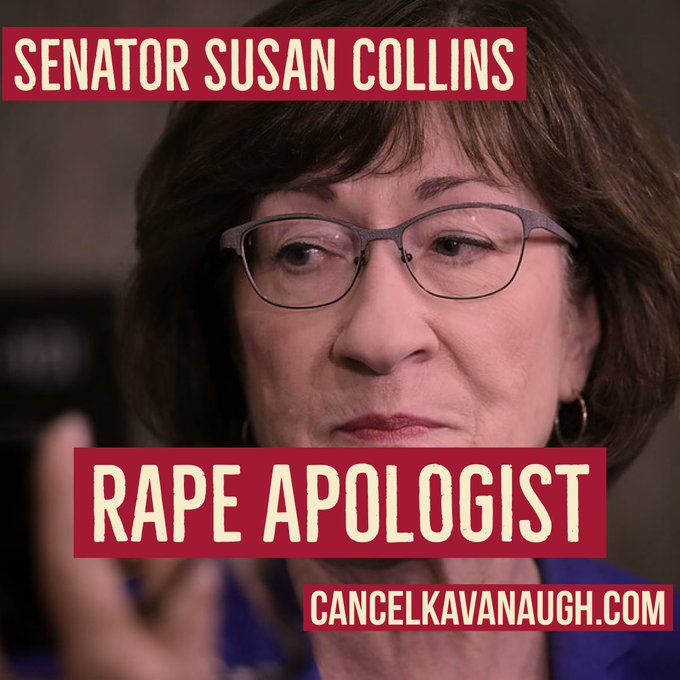 This is who @SenatorCollins is:

During the Kavanaugh hearings, the fake claim that women only lie about rape 2% of the time was repeated over and over as a justification for believing EVERY claim. Set aside that the 2% claim is definitely wrong — two studies show that it’s off by a factor of 20[1] — and you still must acknowledge that 2% is not zero. Even if you incorrectly buy into that 2% number and insist everyone must #BelieveAllWomen, you are falsely condemning one in fifty accused men. This seems especially relevant in a case like this where there is a great deal of incentive for the women to lie, and some extremely far-fetched stories offered up with zero evidence:

Another creepy thing about libs that has come out during this Kavanaugh fight is they see supporting women who have been raped and taking claims of rape seriously as completely incompatible with caring about whether men are falsely accused of rape. For them, it’s like “pick one.”

We also heard an awful lot of commentary like this during the Kavanaugh hearings: 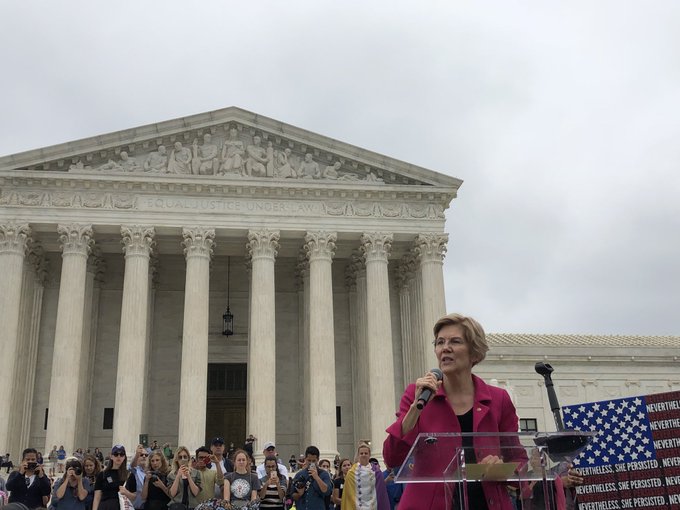 We don’t actually know if Christine Blasey Ford is a survivor of anything. Maybe she is; maybe she isn’t; maybe she made the whole thing up. Her story is lacking in any evidence, so we cannot objectively judge. Additionally, she was certainly heard. The Senate invited her to testify and she did so in front of more than 20 million people. The police in Maryland said they were ready to take her case. After many requests, the FBI even investigated her case.

So Christine Blasey Ford was heard, taken seriously, and was treated orders of magnitude more gently than Brett Kavanaugh was during the whole process. The problem for liberals here isn’t really that Ford wasn’t heard; it’s that an accusation without proof against a man wasn’t enough to ruin him.

Liberals have gone so over-the-top about this that students at the University of Southern California are demanding a professor be fired for writing this[2]:

If the day comes you are accused of some crime or tort of which you are not guilty, and you find your peers automatically believing your accuser, I expect you find yourself a stronger proponent of due process than you are now.

Liberals don’t believe in innocent until proven guilty for men, at least when it comes to men that aren’t liberals.

Rape is a terrible crime. No one should experience something that horrific. But it doesn’t give someone who was victimized a free pass to victimize someone else.

At least that’s how conservatives seem to feel. It’s pretty scary to realize there are large numbers of liberal women who feel completely justified in publicly condemning a man as a rapist based not on the evidence, but because he shares a gender with their attackers.