Having followed his work since college, I put Tony Robbins almost on par with giants of psychology like Freud, Jung, and Pavlov. That may sound like I’m giving him way too much credit, especially since Tony Robbins didn’t invent the NLP techniques he popularized, but the number of people referring to his work in videos, books, and articles I’ve read over the last few years is staggering. If you’re talking about someone who has influenced the influencers over the last few decades, no one else in his field even comes close. Whatever you want to say about him (wait, you mean the infomercial guy from Shallow Hal? The giant guy with the big teeth?), he is as good as it gets when it comes to self-help, psychology and, oh yeah, sales. There’s a reason he started out with nothing and is now worth 480 million dollars.

In any case, despite all of his success, you don’t hear a lot about Tony Robbins on the news. In fact, usually if you do, it’s because a few overzealous reporters freak out about a handful of people getting blisters doing the fire walk he leads over 1000 degree coals. (P.S.: Yeah, I got one of those at the one Tony Robbins event I attended in Chicago.)

In any case, Tony Robbins is in the news because he didn’t shower the #MeToo movement with praise when he was asked about it at a conference. To the contrary, although he went out of his way to say he wasn’t criticizing the whole movement, he noted some very negative things about it.

Of course, this is unacceptable in our tribal political culture where praise for the #MeToo movement is expected to be uniform and overwhelming… UNLESS YOU HATE WOMEN. However, after countless hours listening to his talks, his videos, and interviews with him, I can tell you that Tony Robbins is not particularly political. On top of that, to the degree that he has political opinions at all, I get the impression that he marginally leans to the left. So, on to the latest controversy. 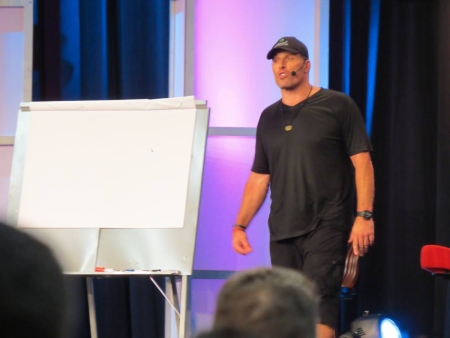 Tony Robbins is 6 ‘7, all muscle, very excited is this is one the few times he stopped moving so I could take a shot.

Tony Robbins was asked about the #MeToo movement by one of his conference attendees who was very much engaged in that tribal political culture mentality that I mentioned earlier. The #MeToo movement must be praised. No criticism of it is allowed. It’s 100 percent good for society. Blah, blah, blah. The controversial answer Tony Robbins gave to the woman was not a political answer. In fact, it was a profoundly different take on the #MeToo movement that’s based on what’s good for people as human beings.

Too often, many of us in politics get so caught up in an “our side, right or wrong” mentality that we forget to ask the most important question about political policies. That is, “How do they actually impact people’s lives in a positive AND negative way?” Incidentally, the second most important question is, “What is the trade-off for the solution being offered?” Neither question gets asked enough and when one of them does, the answers are usually lies pushed by people who want to sell a policy or alternately, who just don’t consider the people negatively impacted by their policies important enough to matter.

Now, back to Tony Robbins.

To begin with, if you listen to his full comments, Robbins goes out of his way, over and over again, to say that he’s not trashing the #MeToo movement. He begins like so:

You could use the #MeToo movement to be such a beautiful thing. I’m not mocking the #MeToo movement, I’m mocking victimhood. I’m not saying you have to agree with me, I’m just suggesting that you consider what its impact is. Look at these people and see what is empowerment. Anger is not empowerment. What you are seeing is people making themselves significant by making someone else wrong and getting certainty. There’s nothing wrong with that, it just won’t make them happy. It won’t make them better and it won’t make you better… (Asked to the audience) Is there any one of us that hasn’t done something that we’d prefer we not, that we’re embarrassed by or was hurtful? Who here has never done anything of that nature? (One person raised their hand) One liar in the room…(later) I think anyone who has been hurt should be able to express it, should be able to go get restitution and I support it. What I am not supportive of is victimhood.

There was a time in America when people HATED the idea of being a victim. A whole movement formed around being an angry victim is not a psychologically healthy idea. If we’re not talking about dealing out justice to a Harvey Weinstein type or some other sexually abusive person, how does it make your life better to participate? How is defining yourself as an angry victim going to make you happy? That’s not the political take on it, but Robbins isn’t a politician. He’s talking about it from a self-improvement viewpoint and he’s right.

Robbins then goes on to note some real life negative consequences that the #MeToo movement has created for women.

When you push someone else, it doesn’t make you safe, it just makes you angry. In Hollywood, where this is most intense – I have so many clients there – I talk to men all the time and it breaks my heart for women, not for men. Because I was just with someone the other day, a very famous man, a very powerful man. He was saying how stressed he is because he interviewed three people that day, one was a woman, two were men, the woman was better qualified, but she was very attractive and he knew, ‘I can’t have her around because it’s too big of a risk’ and he hired someone else. I’ve had a dozen men tell me this.

Upon hearing someone like that, a healthy political movement would probably ask, “What are we doing wrong? How is it that men who don’t intend to harass women are getting so nervous about what we’re doing that they don’t want to hire women? How do we change that?” An unhealthy movement responds to stories like those with comments like this:

if you can read that Tony Robbins interview where he says it’s totally acceptable to not hire a woman who is more qualified for a job than any male candidate just because she’s “very attractive” and you dont walk away thinking Tony Robbins is a piece of shit, your brain is broken

If you’re part of a movement that says it’s about stopping abuse, but shrugs its shoulders when unprovable decades-old allegations are treated as credible, men are treated like they’re guilty until proven innocent, and everything from a bad date to rape is treated as roughly equivalent, you are creating significant new problems while you are trying to solve the old ones.

Everything is a two-edged sword and I’m just trying to get you to see where the sword is hurting… I’m talking to you as a human being who has dealt with tens of millions of people from a hundred countries and here’s what I can tell you. There are patterns that make you angry, patterns that can make you sad, there are patterns that excite you, there are patterns that make you grateful. You gotta choose your patterns well. Because otherwise, you’ll let the culture choose them for you… I’m not saying the movement is wrong. I’m saying everything has a consequence… and you want to use things in a way that doesn’t addict you to your problems and you don’t want to be a victim. If you use it and it doesn’t make you a victim, I’m thrilled… (To the audience) I’m saying man or woman, if you get in a pattern of victimization, who’s it going to hurt? (Crowd) You… ask yourself a question: How do I want to live my life? Do I want significance through problems or significance through growth?

This is a message that applies not just to the #MeToo movement, but to much of modern politics. This is a bigger problem for the Left than the Right, but it does apply to both sides.

Speaking of states, what kind of state is our politics putting us in these days? Not Republican politics, not Democrat politics, but politics? Does it bring us together or push us apart? Does it make us feel like we can solve our problems together or like it’s hopeless to even try? Are there people trying to work things out or is the Internet full of partisans screaming profanities at strangers they’ve demonized for disagreeing with them? Which options make us happy long term vs. short term? What makes for happier people? For a happier country?

Politics has never been a business for angels, but only in the last couple of decades have most people stopped asking questions like this altogether. Tony Robbins is looking at all of this from a perspective of what’s best for human beings, not what’s best for a political tribe. More Americans should embrace that approach.