Voter Fraud: Easier Than You Think 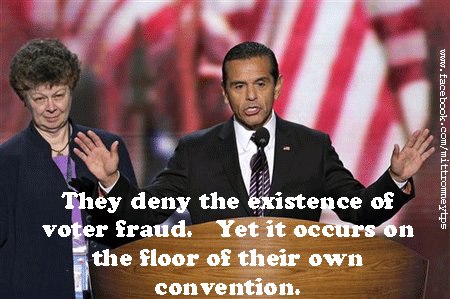 On the one hand, Democrats claim voter fraud is rare, so unlikely, such an insignificant factor at the polls that there’s no need for people to present voter identification at the polls. Sure, it’s REALLY EASY for people to commit voter fraud without the ID, but our voting process is so important, so sacred, so sacrosanct that no one would do such a thing.

Of course, if that’s true, how does: this story exist[2]?

Democrook Wendy Rosen dropped from her race against Republican Rep. Andy Harris (R-MD) today after it was discovered she had been voting in two states in recent elections — Maryland and Florida. Rosen said she was saddened to leave the race in Maryland. (Hey, there’s always Florida!)

Rosen shouldn’t just drop out of the race; she should be going to jail for voter fraud. That being said, keep in mind that we have a Democrat who was running for a House seat who was engaged in voter fraud. When even the Democrats running for office are committing voter fraud, why in the world would we be so naive as to believe that everyone else is so honest that we don’t need voter ID?