Why We Need Joe Miller

The Tea Party’s movements efforts in the US senate have proven difficult. Senators like Rand Paul, Ted Cruz and Mike Lee have been doing an excellent job but have struggled because they lack of reinforcements. Two of our senators, Paul and Cruise are making it clear that they plan to run for president in 2016. Will the Senate’s best conservative wing man Mike Lee have a wing man? 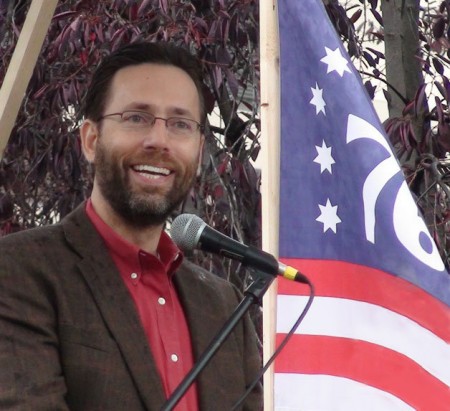 Tea Party favorite Joe Miller seemed to be a sure bet after defeating establishment Senator Lisa Murkowski in the Republican primary of 2010. After a questionable write in campaign, Murkowski managed to squeak out a “victory” in the general election. Murkowski’s sour grapes were funded and supported by corny businesses who spent millions of dollars attacking the Republican nominee.

What is so scary about Joe Miller to people who survive by suckling the government teat? Over the years I had the pleasure of getting to know Joe Miller and his family as part of the Tea Party movement. A West Point graduate, graduate of Yale law school, and a constitutionally sound federal and state judge aren’t even the most impressive things about Joe Miller. Joe and his wife Cathleen have raise 7 pretty amazing kids.

Joe is an expert in the fiscal under-pinning of conservative principals. He has a wonkish interest in the details of legislative policy making. Joe is a fighter, when a bias media help sink his campaign in 2010 he built his own state wide media infrastructure. The Western Representation PAC is proud to join Sarah Palin in endorsing Joe Miller for the US senate.

As a group we have largely stayed stayed out of the Alaska race to avoid even the slightest appearance of impropriety because Joe Miller was once our chairman. There is no doubt that Joe Miller will be a tireless and vocal advocate for the conservative grassroots as a member of the senate.

When Alaskan’s go to the polls this Tuesday we hope that they will vote for the only candidate America can count on to do the right thing.