It turns out that Trump isn’t the only one who has a hate-hate relationship with the mainstream media. Former Sheriff David Clarke was on Fox News on Saturday when he took the opportunity to lash out at the “lying lib media” for claiming that he is the subject of an FBI investigation.

The Washington Examiner reported that multiple outlets claim the FBI obtained a warrant in March to look through Clarke’s private email. Clarke didn’t take too kindly to this and hit back in a way that only he can. 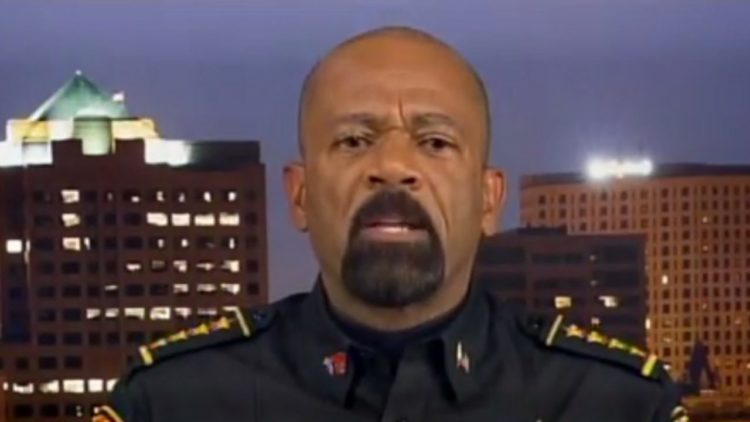 He posted a vicious tweet online attacking the media for lying and creating fake news as a way to “smear” him.

“BREAKING NEWS! When LYING LIB MEDIA makes up FAKE NEWS to smear me, the ANTIDOTE is go right at them,” he wrote. “Punch them in the nose & MAKE THEM TASTE THEIR OWN BLOOD. Nothing gets a bully like LYING LIB MEDIA’S attention better than to give them a taste of their own blood #neverbackdown.”

Naturally, the tweet included a Photoshopped picture of “Clarke” kicking “CNN” while “Trump” holds them down.

And why is it so easy to manipulate the base? Well, Clarke has an answer for that too.

“LYING Lib media spreads FAKE NEWS about me and @realDonaldTrump to fool their liberal followers into believing LIES because as Mrs. Bill Clinton once said, ‘Look, the average DEMOCRAT VOTER is just plain STUPID,” he writes. “‘They’re easy to manipulate.’Classic!”

LYING Lib media spreads FAKE NEWS about me and @realDonaldTrump[2] to fool their liberal followers into believing LIES because as Mrs. Bill Clinton once said,
“Look, the average DEMOCRAT VOTER is just plain STUPID. They’re easy to manipulate.”
Classic! pic.twitter.com/8n5tIZKOcI[3]

Some snowflake later reported Clarke’s tweet, but even the uber-liberal Twitter couldn’t find a reason to remove it.

“Winning against LYING LIB MEDIA and Whiney SNOWFLAKES again,” he gloats. “Like @realDonaldTrump said, we’ll win so much we’ll get tired of winning. Not yet however. Diaper wearing lefty didn’t like my metaphor reference to punching LYING LIB MEDIA in the nose. Twitter said no violation. Duh.”

The FBI did obtain a search warrant in March which was said to be related to an intimidation lawsuit, but the case was closed out less than two months later. Liberals will just do anything they can to smear a good man’s name. If someone came after a black Democrat like this, it would be all “racism” this and “racism” that. But because Clarke is a Republican who supports the President of the United States, he’s automatically a target. Odd, don’t you think?

Did Clarke handle this appropriately? Let us know what you think in the comments below!