VIDEO: Professor Calls Ben Shapiro A ‘Neo-Nazi’ – Wants To Do THIS To Conservative Speakers

Ben Shapiro is one of the most principled conservatives out there.[1] He’s a great speaker and a good guy. Calling him a neo-Nazi is obscene… especially since he is Jewish. Shapiro held a lecture at California State University in February. Marxist professors were furious over it and swore they would find a way to stop Shapiro and other conservatives from ever speaking at the University again. That piece of fascism comes from university President William Covino. Melinda Abdullah, chair of the college’s Pan-African Studies department, called Shapiro a racist and a new-Nazi… a neo-KKK member. Abdullah went on to say she is hearing from students who feel “traumatized” and “brutalized, physically, emotionally and mentally” by Shapiro’s months-old lecture, which is ironic because during Shapiro’s talk, many protesters rallying against him reportedly became violent. 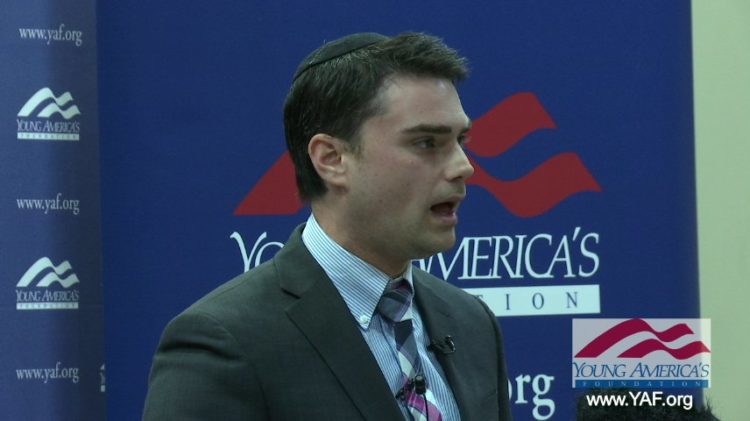 Conservative commentator Ben Shapiro held a lecture[3] at California State University, Los Angeles, in February. One week ago, university President William Covino hosted a “healing space” meeting to brainstorm ways CSULA can block speakers like Shapiro from visiting the school in the future.

In the newly-released video obtained by the Young America’s Foundation[4], Covino can be seen emphatically saying he would “never” invite Shapiro to speak on campus, adding that it was students who invited the conservative personality and funded the event.

“I would have never invited anybody like Ben Shapiro,” the president said, later suggesting the university put in place a set of “criteria” that potential speakers must meet in order to be hosted at CSULA.

When asked by a student how he plans to block events like Shapiro’s from happening again, Covino didn’t offer a clear answer, only telling the student he believes — “very tragically and unfortunately” — the issue of hosting a conservative talker will arise again.

During the same session, professor Melinda Abdullah, chair of the college’s Pan-African Studies department, told Covino that she found Shapiro to be an advocate of “anti-blackness,” even calling him a “neo-Nazi,” which she said is “ironic” because she knows he’s Jewish.

“I get he’s Jewish, so that’s ironic that I’m calling him a neo-Nazi,” she said, “but that’s basically what he is. A neo-KKK member — let’s call him that.”

“It seemed more like brutality when students were being assaulted and hustled into my lecture two at a time through back entrances, when I required a phalanx of cops just to get on and off campus, and when the students were trapped in a room for fear of violence just for wanting to hear me speak,” Shapiro told TheBlaze. Shapiro said “of course” he would be willing to go back to CSULA, or any campus, adding that “the neo-Nazis who inhabit the alt-right will be shocked to learn I’m one of them.” All he does is speak about conservative issues and for that they threaten him. “The video just demonstrates that the left will slander conservatives without evidence, then use that slander as the basis for censorship,” he said. “I pay these people with my tax dollars.” Interestingly, though the university leadership apparently wants to keep people like Shapiro out of the school’s lecture circuit, they just hosted Angela Davis, a convicted criminal and 1960’s Communist Party USA leader. Nice values they have there. These universities are radical, violent cesspools. Ben Shapiro is a brave guy who won’t back down. Good for him. I stand with Ben Shapiro on the Constitution and for freedom of speech.