Who made George Will the spokesman for the GOP?[1] He’s defining himself in this article as the consummate judge of who and who isn’t a conservative or a Republican. This is one of the most dishonest political hits I have ever read. Never mind that Will’s wife works for Scott Walker, who I already had issues with because of the people he has surrounding him… I’m sure that has nothing to do with this at all (that’s sarcasm by the way). I support and want Ted Cruz elected, but I take great umbrage at the way Trump is being treated. He should be allowed to run his race and state his stances for Americans to take or leave. That’s the way free elections are supposed to be run. Not by some columnist who uses false arguments (see below) to justify calling for banning Donald Trump from future debates and calling any that support him faux conservatives. That’s a lie… I know a lot of passionate conservatives and Tea Party people who are supporting Donald Trump. Will is attempting to discredit and marginalize those who would dare support Trump. Careful George… you are beginning to sound a great deal like Saul Alinsky. 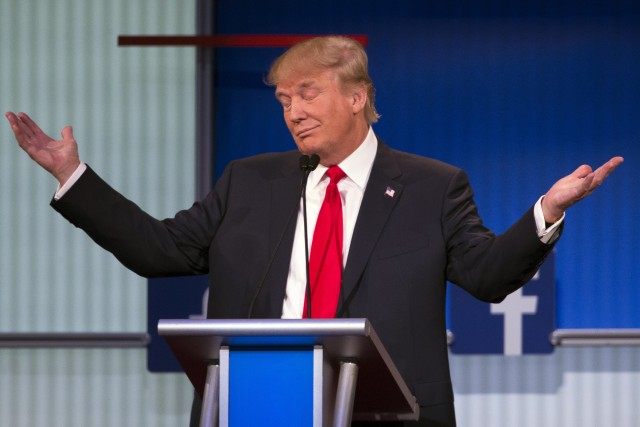 In every town large enough to have two traffic lights there is a bar at the back of which sits the local Donald Trump, nursing his fifth beer and innumerable delusions. Because the actual Donald Trump is wealthy, he can turn himself into an unprecedentedly and incorrigibly vulgar presidential candidate. It is his right to use his riches as he pleases. His squalid performance and its coarsening of civic life are costs of freedom that an open society must be prepared to pay.

When, however, Trump decided that his next acquisition would be not another casino but the Republican presidential nomination, he tactically and quickly underwent many conversions of convenience (concerning abortion, health care, funding Democrats, etc.). His makeover demonstrates that he is a counterfeit Republican and no conservative.

He is an affront to anyone devoted to the project William F. Buckley began six decades ago with the founding in 1955 of the National Review — making conservatism intellectually respectable and politically palatable. Buckley’s legacy is being betrayed by invertebrate conservatives now saying that although Trump “goes too far,” he has “tapped into something,” and therefore. . . .

Therefore what? This stance — if a semi-grovel can be dignified as a stance — is a recipe for deserved disaster. Remember, Henry Wallace and Strom Thurmond “tapped into” things.

In 1948, Wallace, FDR’s former vice president, ran as a third-party candidate opposing Harry Truman’s reelection. His campaign became a vehicle for, among others, communists and fellow travelers opposed to Truman’s anti-Soviet foreign policy. Truman persevered, leaders of organized labor cleansed their movement of Soviet sympathizers, and Truman was reelected.

He won also in spite of South Carolina’s Democratic Gov. Thurmond siphoning off Democratic votes (and 39 electoral votes) as a Dixiecrat protesting civil rights commitments in the Democratic Party’s platform. Truman won because he kept his party and himself from seeming incoherent and boneless.

Conservatives who flinch from forthrightly marginalizing Trump mistakenly fear alienating a substantial Republican cohort. But the assumption that today’s Trumpites are Republicans is unsubstantiated and implausible. Many are no doubt lightly attached to the political process, preferring entertainment to affiliation. They relish their candidate’s vituperation and share his aversion to facts. From what GOP faction might Trumpites come? The establishment? Social conservatives? Unlikely.

They certainly are not tea partyers, those earnest, issue-oriented, book-club organizing activists who are passionate about policy. Trump’s aversion to reality was displayed during the Cleveland debate when Chris Wallace asked him for “evidence” to support his claim that Mexico’s government is sending rapists and drug dealers to the United States. Trump, as usual, offered apoplexy as an argument.

A political party has a right to (in language Trump likes) secure its borders. Indeed, a party has a duty to exclude interlopers, including cynical opportunists deranged by egotism. This is why closed primaries, although not obligatory, are defensible: Let party members make the choices that define the party and dispense its most precious possession, a presidential nomination. So, the Republican National Committee should immediately stipulate that subsequent Republican debates will be open to any and all — but only — candidates who pledge to support the party’s nominee.

This year’s Republican field is the most impressive since 1980, and perhaps the most talent-rich since the party first had a presidential nominee, in 1856. But 16 candidates are experiencing diminishment by association with the 17th.

Soon the campaign will turn to granular politics, the on-the-ground retail work required by the 1.4 percent of the nation’s population that lives in Iowa and New Hampshire. Try to imagine Trump in an Iowa living room, with a macaroon in one hand and cup of hot chocolate balanced on a knee, observing Midwestern civilities while talking about something other than himself.

Television, which has made Trump (he is one of three candidates, with Mike Huckabee and John Kasich, who have had television shows), will unmake him, turning his shtick into a transcontinental bore. But not before many voters will have noticed weird vibrations pulsing from the GOP.

So, conservatives today should deal with Trump with the firmness Buckley dealt with the John Birch Society in 1962. The society was an extension of a loony businessman who said Dwight Eisenhower was “a dedicated, conscious agent of the Communist conspiracy.” In a 5,000-word National Review “excoriation” (Buckley’s word), he excommunicated the society from the conservative movement.

Buckley received an approving letter from a subscriber who said, “You have once again given a voice to the conscience of conservatism.” The letter was signed, “Ronald Reagan, Pacific Palisades, Cal.”

I find it fascinating that George Will would choose the Washington Post to use as a public forum to attack Trump. Will is from the National Review which dumped Mark Steyn[3] because of his opinions. That’s telling. And I love how he hides behind William Buckley’s skirts. He even invoked Reagan, who by the way, was a friend of Trump’s. Will also does not speak for the Tea Party or conservatives in general. His conservative credentials leave something to be desired on their own. This is a stitched together hit piece that is specious and weak in logic and facts. I actually support the John Birch Society. I’m also a dedicated commie hunter. For George Will to throw the political kitchen sink at Trump instead of tending to his chosen candidate’s campaign and stances, simply because he fears Trump will somehow win, speaks to the strength of Trump’s message and the weakness of Will’s conservatism.