But then it gets worse. Paul Ryan talks more trash about Assange, reminding people that the WikiLeaks leader is wanted on a rape charge in Sweden.

Now that’s definitely fighting words. Will we see something of Paul Ryan’s leaked? Will he be a victim of hacking and information being exposed?

What could we possibly find out about Paul Ryan?

The radio interview also asked Ryan about Donald Trump’s Tweets about the incident, but Ryan deflected with a response that he won’t comment on every little Tweet that Trump sends.

And we all know one thing – Trump needs to chill on the Twitter. He’s about to be President and I don’t know if I want my President commenting on every little thing via Twitter. Throw out some funny messages once in a while, some hopeful ones, some thank you’s, but keep it very low key, calm and collective. 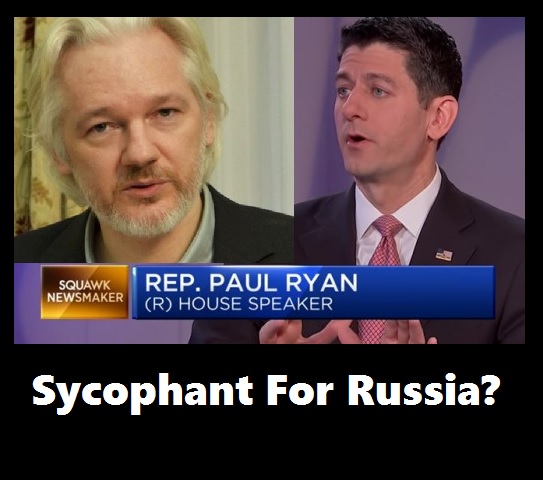 When asked to comment on President-elect Donald Trump’s earlier tweets about the matter, Ryan refused, saying it would be a waste of his time.

“The last thing I’m going to do is start commenting on every little tweet or Facebook post. That is just not what I do with the president-elect or when he’s president,” he said.

Hewitt seemed to agree with Ryan’s assessment of Assange, advising his listeners to not trust a word the man says.

“The guy is a creep. He’s wanted on a rape in Sweden,” Hewitt said. “I don’t trust a word he says. He is a Russian front. … Anyone who believes anything Julian Assange says, you just have to ask yourself: When are you going to wake up to the fact he’s a very bad guy?”

Bringing up those rape charges is a big deal.

I expect there might be a retaliation from WikiLeaks.

About to be the PaulRyanLeaks!